Meet Adriana Zardini. She is one  of the kindest and more active blogger buddies I've met online. We share many passions . First of all our love for Jane Austen's World. Adriana is the   founder of Jane Austen Society in Brazil (JASBRA),  and the  translator of Mansfield Park and Sense and Sensibility into Portuguese. I asked her to tell us about her love for Jane Austen...  Read her guestpost.


I read Austen for the first time in 1999 when I was taking a course about English Literatura (XIX Century) in the University here in Brazil (Federal University of Minas Gerais). I read Emma and as the movie with Gwyneth Paltrow was a great success I saw it too. I should confess that although I loved Jeremy Northam character I had my doubts about Gwyneth. I really don't know why I didn't like her as Emma. I saw other Emma's adaptations too (1972, 1997 and 2009) and the last one is my favorite! 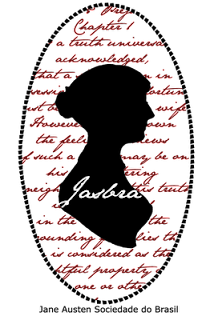 In 2001 I went to New York, to study English at CUNY (The City University of New York) for 6 months. There I had a lot of time to read, so I found three Austen's books in the NY Public library shop (Emma, Sense and Sensibility and Pride and Prejudice). It was a fantastic time to meet Mr Darcy and Lizzy, The Dashwoods and re-read Emma again!
I soon fall in love with those books! But, it was in 2005 with Pride and Prejudice movie that I started talking and discussing about Jane to other people. The social network called Orkut was a success here in Brazil, and people started some communities about this movie. I meet lots of new friends there! We kept in contact since then, and in 2009 while we're in a café here in Belo Horizonte (my city) we decided to start a Jane Austen Society in Brazil. We took 2 months to prepare everything and had our 1st National Meeting with 15 people from all over Brazil!
Since then Adriana has never stopped spreading the love for Jane Austen and her work and she's one of the most enthusiastic and active Janeites I know!

Follow Adriana at http://janeaustenclub.blogspot.com/
and on facebook.
Adriana occasionally writes on Jane Austen in Vermont and Jane Austen's World
Posted by Maria Grazia at 23:11

I knew about JASBRA but had no idea it was so recently started! Thanks for everything you have done to spread your love of Jane. As far as I'm concerned, the more Austenites out there, the better the world will be!

It is a truth universally acknowledged, that Jane Austen is beloved around the world! :)
Thanks for this introduction to another wonderful Janeite!

I love Adriana, she is cute.

I totally agree with you Phylly:
It is a truth universally acknowledged, that Jane Austen is beloved around the world! :)
Adriana