I'm Carolyn Eberhart. This is my second time at My Jane Austen Book Club . First I visited for one of Maria Grazia's "Talking Jane Austen with..." interviews (HERE) where I also talked about my novella published in the collection "A Darcy Christmas". (see picture on the left)
I was born on Valentine’s Day, so it is any wonder that I enjoy the classic stories of love and relationships written by Jane Austen.
I grew up in Michigan and currently live in central Virginia, near the homes of three presidents Jane may have heard about – Jefferson, Madison and Monroe.
I first read Jane Austen after the 1995 mini-series of Pride and Prejudice.  I watched the series at least once a week for months! I started writing my sequels back in 1996 after I read one of the few published sequels available at the time and found it wanting.  I like to fill in the parts of the story that Jane only hints at her writing.

Besides a day job, I have been on the committee of the Republic of Pemberley for many years, first as the Bits of Ivory hostess and currently on the Austenuations board for minor works and sequels.  I am also the membership chair for Virginia Romance Writers.
In my spare time, I enjoy trying recipes from an extensive cook book collection (I never met a cook book I didn’t like). October is the start of my “truffle season” where I make between 30-40 different varieties of hand rolled truffles for Christmas presents. I also enjoy making Regency inspired Barbie clothes.
In fact, the theme of today's guestblog should be games and pastimes. And one of them we can date back to the 18th century is ...Jigsaw Puzzles!
Jigsaw puzzles began as a simple educational tool.  The first one was invented by Englishman John Spilsbury in the mid-1760s. Spilsbury attached a map to a piece of wood and then cut out each country with a marquetry saw.  Jane Austen may have used one in the schoolroom as they proved quite popular as a learning aid.  Puzzles as we know them were not developed until the mid-1800s. 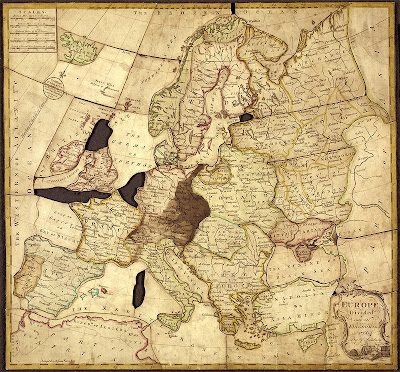 John Spilsbury map puzzle (above).  Only two of Spilsbury's puzzles are known to exist. Regency Pub Puzzle (above).  Not a period piece but it shows the elaborate or fanciful shapes often used in older jigsaw puzzles. 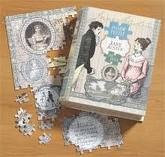 GIVEAWAY TIME!   This is the puzzle I am giving away.  The puzzle scene is Darcy's first lamentable proposal to Elizabeth.  The puzzle box looks like a book, so you can store on your bookcase and tell friends you have a rare copy of the Jane Austen's "Jigsaw Puzzle".
The giveaway is open WORLDWIDE and ends on August 13th when the winner will be announced. Good luck, everyone. Comment this post, telling us what is your favourite game or pastime. Don't forget to add your e-mail address to be contacted by Maria Grazia.

thank you for sharing your love of puzzles!!! & what interesting puzzles you mentioned!!!!
thank you for visiting & for the giveaway!!!!

My favourite pastime - reading next quilting!

Thank you for offering such a nice giveaway.

I've been a puzzle nut too, at times in my life, but have never seen the quirky shapes of older puzzles -- LOVE that!

I'm going to be honest with you: I don't really have a favorite game. All my spare time (and working time, sometimes) I spend it reading (books, android, kindle, ...).Thank you! cmocord@gmail.com

I like playing sudoku. My other pastime is singing. ^_^
thank you!

I enjoy jigsaw puzzles and usuallyonly do those of 5000 pieces or more. I prefer those showing wildlife and many of my completed puzzles are framed and hanging on the wall.

I have also given friends framed completed puzzles as gifts.

Thanks for the giveaway and for opening it to worldwide entries.

Hi dear! Marvelous this puzzle.I didn't know it. A Jane Austen's puzzle is something more than wonderful!Well, my favourites pastimes are books and puzzles. But a Jane's one I've never heard about. Amazing! I've posted this on my sidebar. God bless! :D Mahrian
mahrianwishmade@gmail.com

When I was a child I used to do many puzzles, especially in winter when the weather was freezing and I couldn't go outside to play. A Jane Austen puzzle would be the best choice to recall childish feelings in the age of maturity :)

I love this puzzle, thank you for the giveaway :)
In my spare time I like playing mahjong and sudoku.

I prefer to read books and newspapers when I'm free. Other than that when I'm in the mood, I try mu hand to solve crossword puzzles mazes, etc.

Thanks for the giveaway.
evangelineace2020(at)yahoo(dot)com

My favorite past-times...reading, writing, and riding horses :) oh, and blogging ;)

what a deliteful post and giveaway! luv the originality ") blstef1 at mts dot net
my fave game? kings in the corner card game
fave pastime? reading!!!

I want to enter to win the jigsaw puzzles of Elizabeth Bennet and Mr. Darcy!!! How do I enter?? I want in!!

Just add an e-mail address where I can warn you, in case you are the winner, Princess Dana. And, of course, thanks for entering the contest and following My Jane Austen Book Club.

Maria Grazia Hello! I write from Spain and talk to you about my favorite games are card games. Here in Spain are typical games as "brisca", "tute" or "donkey" and also "anise" not whether it will have English translations.I love playing them with family or friends! Do you mind if I send the email in the mail? A greeting and with your permission, list your contest on my blog ...