ENID WILSON AND HER MARTIAN DARCY - AUTHOR INTERVIEW AND GIVEAWAY 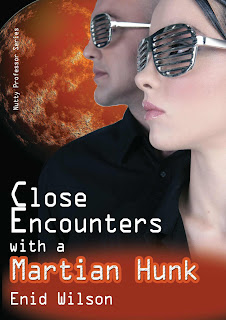 Welcome back to My Jane Austen Book Club, Enid!

Thank you Maria for hosting me again.

Well, where can we start from?  You know I love Jane Austen and period drama. Honestly, what is this book about Martians doing in my blog?

Haha, Maria, I confess that I had a ball when you hosted my co-authors Aimée Avery, June Williams and I in July about our Jane Austen-inspired short stories, Honor and Integrity (HERE). I itch to find another excuse to appear in your blog again.

My latest novella Close Encounters with a MartianHunk is a romantic science fiction. It definitely doesn’t have a Mr. Darcy in it. But believe it or not, when I first wrote the story five years ago, it was a fun piece I posted at a JAFF forum, featuring a Martian Darcy.

A Martian Darcy?  How can you put Jane Austen’s characters in Space?

Sometimes I think my imagination has a life of its own, especially with my obsession with Jane Austen’s novels. Pride and Prejudice highlights the social division in Regency England. I took this theme and developed the story around it, with Martians being more superior to Earthlings. When Martian Darcy met Earthling Elizabeth, their views clashed even though they were attracted to each other. But in this published version, I no long use Jane Austen’s characters. My hero and heroine become Eric Dark and Sophia Wilkinson. Dark still slighted Sophia and they still had to overcome some obstacles to gain their marital bliss.

A slight? That’s typical Mr. Darcy’s behaviour. Tell me more about it.

How about I let you in on the book blurb…

“Martian pure clones shouldn’t have human urges! Are you a fake?”

Hunky Martian Eric Dark excels at being calm and collected. However, his first meeting with petite Earth woman Sophia Wilkinson is anything but.

“You’re not tall enough, according to Martian standards.”

Besides being insulted by the cold Martian, Sophia has to endure his suddenly roving hands. What’s wrong with the handsome Martian?

An attack by some mercenary soldiers from Jupiter throws Dark and Sophia together, fueling their sexual attraction. And a medical procedure activates Dark’s special talent, ensuring the pair throw away their initial prejudice in favor of some hot kisses and a lifetime of bliss.

A slight and initial prejudice? My readers who love science fiction may be interested in it.

I need to make a disclaimer. The book contains explicit adult content, ropes, needles and aliens.

OK, I’m sure some of my readers can handle that, while some others may be shivering all over and thinking we are totally out of our senses. Have you got a gift for those who might be interested?

That’s great. I’d love to give out an ebook version of it to your readers. Please answer the follow question in the comment below to enter the draw:

What other genres do you think Miss Austen would like to write?

The giveaway is open to worldwide readers and ends on . Happy reading and thanks again Maria, for having me.

Thank you Maria for hosting me. I've taken Mr. Darcy to Space and France before. Hmm, maybe time to take him to Italy.

i love the concept of Darcy in space! very interesting indeed.
it seems that Austen has invaded all genres. just yesterday, i learned about a parody which involved Darcy and Lizzy doing some kinky stuff involving riding crops. i was amused and honestly, my curiosity was piqued but i don't think i'd read it. it would spoil the idea i have of this sweet Regency sweethearts.
has Austen written a children's book? it would be interesting to read one about time travel or an adventure/fantasy story. how about a fairy tale?
my head is spinning with the possibilities! endless i would say! lol.

Ao, you're spot on. If Miss Austen was to write a children book, I think it will sell even more than Harry Potter.

I hope you take Darcy to Australia one of these days. It's a big country with plenty of space to hide aliens and their spaceships. Heh!

Hello,
I have go through your post and found some information which very important for me
Yüz Germe

June, maybe I will drop Darcy into the desert. Yuz, thanks.