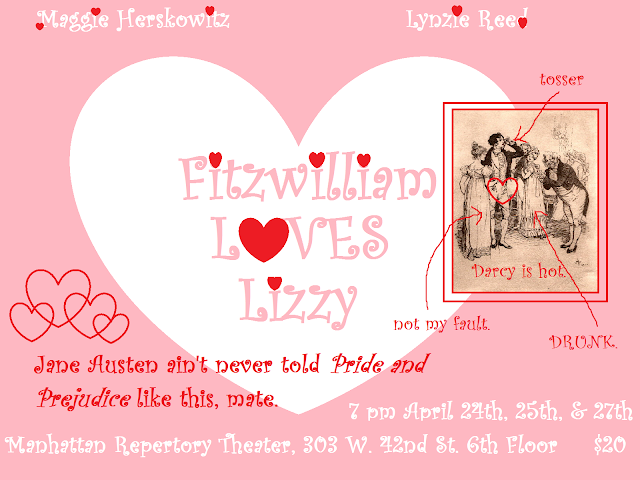 Maggie Herskowitz came to love Jane Austen thanks to her best friend and being an actress and a playwright has now decided to make one of her dreams come true: to be Elizabeth Bennet in an adaptation of Pride and Prejudice for the stage. She'll be in a very special version that she herself wrote: Fitzwilliam loves Lizzy. Discover more about the show that is going to debut soon in New York City reading Maggie's guest post. If only I didn't live so far ...

It all started with an apartment in Boston. I shared it with my best friend, a girl whose sister’s first name is “Jane” and whose middle name is “Austen.” No joke. This is the environment into which I was thrust by association with her family. By the time I lived with her nearly two years, I knew more about the Brontes, Emily Dickinson, and Miss Jane Austen than I would have ever thought possible . . . more than I think I ever wanted to know. But she had definitely piqued my interest and brought an author at the edges of my mind to the forefront of my awareness.

Cut to: I move to New York and start working as an actress and playwright. I put up a scene from “Pride and Prejudice” in my acting class. When we went to repeat the scene, we couldn’t afford to rent period costumes again, so we decided to do it dressed in modern clothing. And then we decided to speak without heightened old-fashioned British accents. But then we decided to throw in lower-class modern London accents. And then we decided to set it in the modern day. Playing around with different ideas spiraled out of control and before I knew it, we were asking ourselves some amazing questions:
“There’s so much letter-writing back and forth in Pride and Prejudice; how much would the story change if they could just text? Like, how would they react to things if the news traveled instantaneously?

“What would Jane wear clubbing? What would Elizabeth? How would they trick Elizabeth into going since she’d probably hate dancing at a club as much as dancing at a ball?”
“How would it work that Jane walks through the rain to have an excuse to stay at Bingley’s house when she can always just drive or be driven home?Unless she gets sick on purpose so she can stay home and Skype with Charlie Bingley!”
And perhaps most importantly:
“Lizzy’s described as a ‘great reader;’ who would her favorite modern author be? How obsessed would she be with Game of Thrones?”

And so on. The end result became the hour-long one-act Fitzwilliam Loves Lizzy, which I am so excited to share with the Jane-ites of the world. A little bit about the show:
Okay, so, like. There’s this bloke, Fitzwilliam, yeh? Wot sort of name is Fitzwilliam, anyway? No wonder he goes by Darcy; if your name were Fitzwilliam you wouldn’t want anyone to call you it eivver, yeh? And it’s like, Lizzy and Jane are just tryin’ to live their lives, you know? But like, Charlie Bingley and Janie have been Skyping constantly except now he’s texting Georgiana Darcy and it’s well-confusing because that tosser Darcy keeps texting Lizzy and then ignoring her calls and it’s like, seriously mate, make up your mind.  Via Skype, text, phone, and e-mail, Lizzy and Jane Bennet hafta navigate the totally and completely mind-boggling world of wot the fock guys are thinkin’ about and wot they even mean and who is it exactly who’s proud and who’s prejudiced, in’it though? 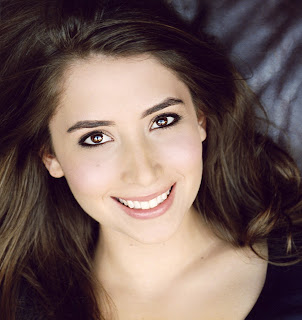 The show runs about an hour long and is a really, really funny take on what the lives of the eldest Bennet sisters would be like in modern-day London. It’s a good time even if you know nothing about Pride and Prejudice, but I think those of us who know it super well will truly appreciate it on an entirely different level .
If you live in or near New York,  Fitzwilliam Loves Lizzy runs April 24th, 25th, and 27th at 7pm each night at the Manhattan Repertory Theater 303 W. 42nd Street 6th floor (actually, that’s the information even if you don’t live in or near New York, it’s just no longer relevant to you). If you’re nowhere near me, I hope to share the full show with you via YouTube at some point and can’t wait to hear people’s reactions. If you do come, be sure to say hi to me afterward!

Thanks so much and have an Austen-filled day!