MARIA GRACE, ALL THE APPEARANCE OF GOODNESS: GUEST POST & GIVEAWAY 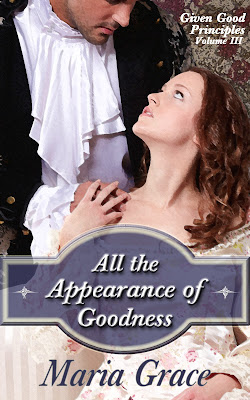 Given Good Principles is a three part series that explores what Jane Austen’s’ Pride and Prejudice’ might have looked like if Darcy’s pride and Elizabeth’s prejudice no longer played a central role in their relationship. For both, mentors and situations provide opportunities for reflection and growth, making them very different people when they meet.Our beloved characters remain true to their essentials while they make different and arguably better decisions throughout.

In the first volume of the Given Good Principles series, Darcy’s Decision, Fitzwilliam Darcy faces the challenges presented, when, in the midst of dealing with Wickham’s attempt to compromise Georgiana, he discovers his father’s darkest secrets. With the help of his mentor, Mr. Bradley, Darcy struggles to overcome some of the blackest moments of his life.

In Volume 2, The Future Mrs. Darcy, Elizabeth Bennet struggles to reign in her sister when the regiment comes to visit Meryton.  To her shock, she learns that Lydia  has endangered the reputation of the entire family and it is up to her, with the help of her Aunt Gardiner’s advice and Mr. Pierce, the local curate, to keep her family from social ruin.

When Mr. Darcy makes his first appearance in Herdfordshire and his first meeting with Elizabeth goes quite agreeably. But their budding relationship is challenged by the arrival of the cousin we love to hate, Mr. Collins, avery differentversion of his usual self.

What is a young woman to do? One handsome young man has all the goodness, while the other the appearance of it.  How is she to separate the gentleman from the cad?

Collins has everything, good manners, good looks and a good position. His wit and his humor immediately attract Elizabeth’s attention. Though she likes Mr. Darcy, she is certain that their differences in social standing doom any hope of a relationship.

When Darcy arrives in Meryton, the last thing on his mind is finding a wife. Meeting Elizabeth Bennet changes all that, but his naturally reticent disposition stands in the way of him winning her favor. When he discoveres that Collins’s motives are less than honorable, he is forced to decide between his shyness and the only woman he had even considered as the future Mrs. Darcy.

With the help of Bingley, Fitzwilliam and his mentor, Mr. Bradley, Darcy must  find a way to protect Elizabeth from a danger she does not even know threatens her. 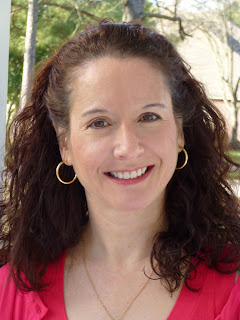 Though Maria Grace has been writing fiction since she was ten years old, those early efforts happily reside in a file drawer and are unlikely to see the light of day again, for which many are grateful.

She has one husband, two graduate degrees and two black belts, three sons, four undergraduate majors, five nieces, six cats, seven Regency-era fiction projects and notes for eight more writing projects in progress. To round out the list, she cooks for nine in order to accommodate the growing boys and usually makes ten meals at a time so she only cooks twice a month.

All the Appearance of Goodness at Amazon and Nook

There's a paperback copy of All The Appearance of Goodness for US readers only and an e-book version for readers from any other country.

Take you chances in the rafflecopter forms below. Deadline April 25.

WN A SIGNED PAPERBACK - US ONLY