With a devoted Austenian sensibility and absurd theological commentary, filmmaker and writer Whit Stillman ingeniously reimagines and completes one of our greatest writers’ unfinished works. As much homage to its muse’s perennial influence as testament to its author’s brilliance, Love & Friendship is a sharp comedy of manners, and a fiendishly funny treat for Austen and Stillman fans alike. 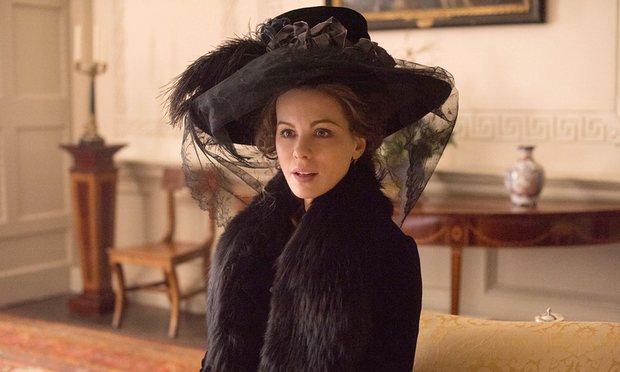 Love & Friendship brings a healthy helping of scandal, along with lots of laughs, to Georgian and Victorian London. Whit Stillman has also created a film version of Love & Friendship, starring Kate Beckinsale and Chloe Sevigny, opened in select theaters on May 13th.

When reading Jane Austen's Lady Susan back in 2009, I was thrilled to discover how daring Jane Austen had been to write such an incredibly modern, atypical heroine for one of her works and I went on thinking how thrilled she must have been herself while writing. Was young Jane fascinated by her wicked creature? I actually think so. Lady Susan Vernon is a totally free woman who, unlike Austen's major heroines, isn't molded by nor bent to conventions, formality and good manners but bends them at her own convenience.

Lady Susan reveals herself surprisingly unconventional. I had always thought Emma was the most “imperfect” and flawed among Austen’s heroines,  but reading Lady Susan then and now its revisitation, Love & Friendship by Stillman,   I realized Lady Susan is her most wicked creature.
May I use a sort of oximoron for such a unique character? Pleasantly evil, that's what Lady Susan Vernon is. Vain, selfish, enterprising, free, cold, deceitful loveless and emotionless, but anyhow one of the best written heroine in literature.

Just like Mr Manwaring or Reginald De Courcy, one can't but be charmed by “the most accomplished Coquette in England” because she indeed “possesses a degree of captivating deceit which” IS “pleasing to witness & detect”.

But If I have to be utterly honest there is something I do NOT like in her: as a mother, I found incredibly disturbing her indifference, if not cruelty, to her daughter, Frederica. Her calculated subtle deceiving trick of faking an interest in her daughter’s education - but in a boarding school far from home and everybody the girl knew - in order to push her to marry Mr James, a man Frederica deeply disliked,  was awfully evil!

Could a fine Austenite like Whit Stillman resist the temptation of such an intriguing,  brilliant character? Apparently he couldn't and has adapted Austen’s  epistolary novella both in a new movie starring Kate Beckinsale and reimagined Lady Susan's story as a straight narrative with a new narrator.

Stillman perfectly captures Austen’s irony and adds to that a second layer of humor since the narrator of the story is Lady Susan’s Vernon’s nephew,  Rufus Martin-Colonna De Cesari- Rocca,  who calls Jane Austen “the spinster authoress - a writer careless of both punctuation and truth, zealous only to do the bidding of their Aristocratic patrons” -  and tries his best to sing his aunt’s praises in order to vindicate her entirely.

The result is a delightful, hilarious narration which made me smile all through my rediscovery of Austen's  novella and of her villainous heroine through Stillman's eyes and words and even laugh out loud more than once.

The book contains also the original version of the novella, in the epistolary form, as Jane Austen wrote it, so if you haven't had the chance to read it you can do it now and compare it to Stillman's adaptations.

I’m so grateful to Whit Stillman for giving Lady Susan a chance to get new life both on screen and on the written page and for letting her be known by a greater audience.

Get ready! Once you meet her, you can't but be charmed.


"Both quirky and hilarious."― Publishers Weekly

"Stillman worships Austen and [the book and film] show a deep familiarity with her life, work, and times."― Laura Miller, Slate

WHAT READERS ARE SAYING

“Haven't even finished reading this book -- but find it truly remarkable. A new Jane Austen, worthy of the original! Imagine that Mr. Collins undertook to rewrite Pride and Prejudice, attempting to rehabilitate his own reputation and that of Lady Catherine de Bough. That gives you an idea of the approach -- but the language is so lovely and the ironies so delicious! I have been laughing out loud, reading passages to my husband. My plan is to finish the book, re-read Jane Austen's unfinished Lady Susan -- and then return and re-read this one. Then I will press my copy on my most discerning friends ...” – Sharon Kay Stout

Whit Stillman was born in Washington, D.C., and attended Harvard, where he was an editor of the Harvard Crimson before working in book and magazine publishing. He has written and directed five films, including the award-winning Metropolitan, Barcelona, The Last Days of Disco, and Damsels in Distress, as well as the TV show The Cosmopolitans. His first novel, The Last Days of Disco, won the 2014 Prix Fitzgerald. He has written for the Wall Street Journal, Harper's, The Guardian, Vogue, and other publications. Visit his unofficial website for updates on this latest Amazon series The Cosmopolitans, and follow him on Twitter as @WhitStillman and on Facebook.

A cyber-celebration in which Jane Austen fans join in their desire
to see a much maligned Personage vindicated, a certain
Spinster Authoress exposed and justice prevail.

Award winning writer-director-filmmaker Whit Stillman tours the blogosphere June 13 through June 24, 2016 to share his latest release, Love & Friendship: In Which Jane Austen's Lady Susan Vernon Is Entirely Vindicated. Thirteen popular book bloggers—card carrying Jane Austen fans one and all—will feature interviews, book excerpts and reviews of this highly acclaimed novel. A fabulous giveaway contest, including hardcopies of the book will be open to those who join the festivities.

In celebration of the release of Love & Friendship: In Which Jane Austen's Lady Susan Vernon Is Entirely Vindicated, Mr. Stillman’s publisher, Little, Brown & Co has kindly offered a chance to win one of three hardcover copies of the book!

To enter the giveaway contest, simply leave a comment on any or all of the blog stops on the The Love & Friendship Janeite Blog Tour starting June 13, 2016 through 11:59 pm PT, June 30, 2016. Winners will be drawn at random from all of the comments and announced on Austenprose on July 1, 2016. Winners have until July 07, 2016 to claim their prize. Shipment is to US addresses. Good luck to all!

Thank you for sharing your thoughts and being part of the tour.

Great fun read, I had to share. :D And I'm so glad to be part of this awesome blog tour! Thanks to you, Karyl, for dropping by and commenting.

Bonjour!
I have not read Lady Susan but the revisitation by Ms Stillman is most appealing. I have seen the posters in the metro of Paris announcing that the film Love & Friendship coming out soon (June, 22nd) and since then I have not been able wait to go and watch it and discover this "pleasantly evil" character!

I desperately wanted to see this film, unfortunately, I couldn't quite align my schedule with the theater which is bit of a distance from my home.