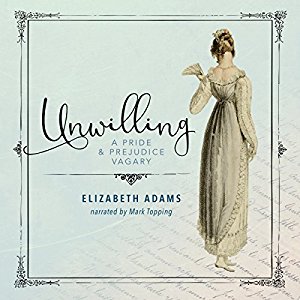 Hello dear friends and thanks for dropping by from time to time to join our online Jane Austen book club. Today I have two Austenesque audiobooks to propose to your attention, Unwilling and The Houseguest by Elizabeth Adams. Discover more about them reading this post and pick up your favourite one. Then enter the giveaway in the rafflecopter form below. Good luck!
Maria Grazia


Unwilling
Mr. Bennet discovers his days are numbered, so he immediately begins to set his affairs - and his five unmarried daughters - in order. Knowing they will fare best should at least one of them find a suitable husband, he cannot refuse any respectable suitors.
The high-spirited Elizabeth suspects something isn't right in the halls of Longbourn, but nothing prepares her for a certain haughty gentleman from Derbyshire. While Mr. Darcy is exceedingly wealthy and handsome, in Elizabeth's eyes, he is also proud, high-handed, and insulting. And unfortunately, desperately in love with her.
Suddenly, Elizabeth is forced to rethink her previous opinions. And accept a choice she never had the chance to make. 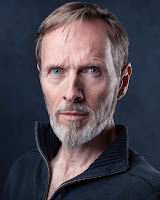 British actor Mark Topping has an increasing portfolio of audiobook titles to his name, across a range of genres; from children’s stories and fantasy adventure to crime thrillers and romance.
His recent stage work in England includes playing Leonato in Shakespeare’s Much Ado About Nothing, and Bernard in Yes, Prime Minister. He is also currently the Mission Commander at Laser Quest arenas throughout the UK and France! He has been performing as Rev John Wesley for more than 15 years and tours with a one-man Passion play, Impossible God.
He lives in the Forest of Dean with his wife and two daughters. 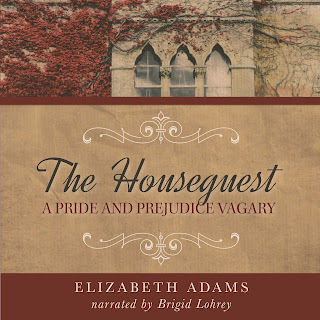 The Houseguest: A Proud and Prejudice Vagary
When Georgiana Darcy comes to Netherfield to visit her brother, she becomes friends with a neighbor, Elizabeth Bennet. After Miss Darcy has returned to London, she invites her new friend to stay with her at the Darcy home in town, unbeknownst to Mr. Darcy.
Will this change in circumstances lead to a change in affections?

The Houseguest at audible.com

Brigid has always enjoyed reading classical literature. She loves Austen’s work, (and has even been to the Austen Museum in Bath!) and so jumped at the chance to narrate Elizabeth Adam’s The Houseguest as soon as she read it, as it was such a great story with colourful, quintessentially English characters which she loved bringing to life. 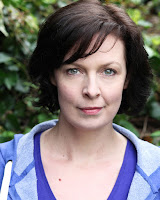 Brigid is a character actress and started narrating audiobooks three years ago. She began with the RNIB for whom she has narrated seven Australian titles from romances to psychological thrillers. For Spoken4 (available on Audible), she has narrated Kelly Rimmer’s When I Lost You and is also currently narrating Kelly’s latest book, A Mother’s Promise, which will be out in December 2016.
As well as audiobooks, Brigid has voiced commercials and corporate jobs for both the UK and Australian markets, as well as bringing characters to life in Radio Dramas such as the English rose Emma Finney in Dark Shadows: Beneath the Veil, and Dream Commando Wahn in Dr Who: Dreamtime with Sylvester McCoy for Big Finish Productions.

Elizabeth Adams loves sunshine and a good book. If she had her druthers, she’d live in a villa on the Mediterranean and go tango dancing every Friday. She makes great cookies and often laughs at inappropriate moments.
She is the author of The Houseguest, Unwilling, and Meryton Vignettes: Tales of Pride and Prejudice.
You can find more information, short stories, and outtakes at elizabethadamswrites.wordpress.com

a Rafflecopter giveaway
Posted by Maria Grazia at 09:26

I enjoyed reading both of those books but would love to listen to them as well. A good narrator really makes a audio book more enjoyable.

I love 'The Houseguest', but 'Unwilling' is on my TBR list. I love early marriage scenarios, and I would love to listen to it. Please, count me for 'Unwilling'. Thanks for the giveaway. :)

Never listened to a jaff audiobook before but these two sound like great ones to start with. Thanks for the giveaway.

I would love to have either of these audio books, as I like to listen to them on my commute to and from work. Thanks for the generous giveaway!

Wonderful giveaway! Thanks for a chance to win an audiobook!

Are Mark Topping's one-man performances of the passion play and/or as John Wesley available anywhere online? Sounds interesting. I would love to win either book.

I haven't had a chance to read these but an audio bbok would be amazing to have!

Thank you for the opportunity. My commute is 2 hours round trip. I pass the time with audio books.

Thanks for the spotlight, Maria!

I have discovered the value of audio books. Wonderful giveaway!

Audiobooks are fantastic and JAFF audiobooks are just the best! Great for commutes, when gardening, cooking or doing housework (except when vacuuming!).