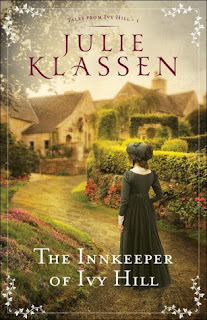 The lifeblood of the village of Ivy Hill is its coaching inn, The Bell. When the innkeeper dies suddenly, his genteel wife, Jane Bell, becomes the reluctant landlady. Jane has no idea how to manage a business, but with the town's livelihood at stake and a large loan due, she must quickly find a way to save the inn.

Despite their strained relationship, Jane turns to her resentful mother-in-law, Thora, for help. Formerly mistress of The Bell, Thora is struggling to overcome her losses and find purpose for the future. As she works with Jane, two men from her past vie for her attention, but Thora has promised herself never to marry again. Will one of them convince her to embrace a second chance at love?

As pressure mounts from the bank, Jane employs new methods, and puzzles over the intentions of several men who seem to have a vested interest in the place, including a mysterious newcomer with secret plans of his own. With the help of friends old and new, can Jane restore life to the inn, and to her empty heart as well?

Visit talesfromivyhill.com to find a map of the village, character profiles, a book giveaway, and more!

This book marks the beginning of your first series. After ten stand-alone novels, why a series?

Two reasons. First, I often receive e-mails from readers asking for sequels, or saying they don’t want a book to end. Sometimes I don’t either! After setting up an entire village and populating it with a cast of characters, it’s hard to say good-bye after one book. I am looking forward to staying in the same village for at least three books, going deeper with the main characters, and bringing more characters to life. Second, many readers (myself included) love village series set in England whether in books or television. Series like Larkrise to Candleford, Cranford, and Thrush Green draw us in with their close-knit communities filled with endearing characters. Or maybe it’s just the British accents! Whatever the reason, I hope readers will enjoy my first series as well.

Book one releases this month. Can you briefly describe it?

Sure. In The Innkeeper of Ivy Hill, a genteel widow becomes the reluctant landlady of a languishing coaching inn when her husband dies. Jane Bell has no idea how to manage a business. But with the town’s livelihood at stake and a large loan due, she must quickly find a way to save the inn. As pressure mounts from the bank, Jane puzzles over the intentions of several men who seem to have a vested interest in the place, including a mysterious newcomer with secret plans of his own. With the help of friends old and new, Jane restores life to the inn, and to her empty heart as well.

What is one small, unexpected fun fact you discovered in your research?

I found the lives of Royal Mail guards interesting. They were dashing in their red coats, armed with a timepiece to keep to their tight schedules and a “blunderbuss” to fight off highwaymen, and many learned to play turns on the horns they used to sound warnings, in hopes of earning bigger tips.

Was there a scene in the book that was your favorite to write? 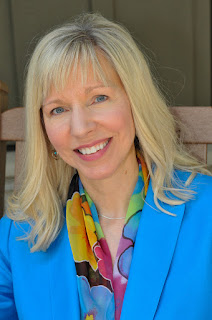 There is a fun scene in which gentlewoman Jane tries to fill feather beds for the first time, and ends up with white feathers flying all over the inn courtyard. Several older village women come to her rescue, running around like girls trying to catch snowflakes before they fall to the ground.

You’ve been writing books for about ten years now. What would you say is your favorite thing about being an author?

I love several things. Two favorites would be listening to the audio versions of my books when they come out (Recorded Books hires such talented British narrators) and hearing from readers who’ve enjoyed or been touched by my books.

JULIE KLASSEN loves all things Jane--Jane Eyre and Jane Austen. A graduate of the University of Illinois, Julie worked in publishing for sixteen years and now writes full-time. Her books have been honored with the Christy Award for Historical Romance, the Minnesota Book Award, and the Midwest Book Award, among others. Julie and her husband have two sons and live in a suburb of St. Paul, Minnesota. For more information, visit www.julieklassen.com

Be sure to enter the giveaway before you leave — the winner will receive a $20 Teavana gift card and a package of four inspirational British romances from four different eras (The Innkeeper of Ivy Hill by Julie Klassen, A Haven on Orchard Lane by Lawana Blackwell, The Lost Heiress by Roseanna M. White, Not by Sight by Kate Breslin). The winner will be notified on December 22.

a Rafflecopter giveaway
Posted by Maria Grazia at 15:24

The Inn Keeper of Ivy Hill looks so good! I love stories like this. Great Q&A!
" There is a fun scene in which gentlewoman Jane tries to fill feather beds for the first time, and ends up with white feathers flying all over the inn courtyard. Several older village women come to her rescue, running around like girls trying to catch snowflakes before they fall to the ground." -Great imagery! I got a smile out of it. lol.

This book sounds like a fun read. I am excited for a series from Julie....her books are wonderful! My favorite book set in England is Pride and Prejudice. I read it every summer.

I love all of Julie's Books! I can't wait to read this one! My favorite British show? That is hard. Of course, I loved Pride and Prejudice on the BBC, but I also am loving the new Sherlock Holmes with Benedict Cumberbatch.

I love stories set in England. Probably my favorite British show is Downton Abbey. I loved the location & setting of that story.

I'd say my favorite show is Downton Abbey probably because it is most recent. I enjoyed Land of My Dreams by Norma Gail which is mostly set in Scotland and all of Michael Phillips books. jarning67@hotmail.com

Great interview! I love the A&E miniseries of Pride and Prejudice best of them all, but I also loved Downton Abbey.

I think I will go with Downton Abbey. But I love so many it's hard to choose!

Pride and Prejudice, of course! book and BBC production (1995)

This sounds wonderful. I have the image of the ladies chasing the feathers in my head. It certainly makes me smile!
Pride and Prejudice is always my favorite!

I love the Outlander Series

I always enjoy a Julie Klassen book! Love the settings, the characters, and the stories. Looking forward to more in this series. Really enjoyed reading about women in business during this time period and the challenges they face.