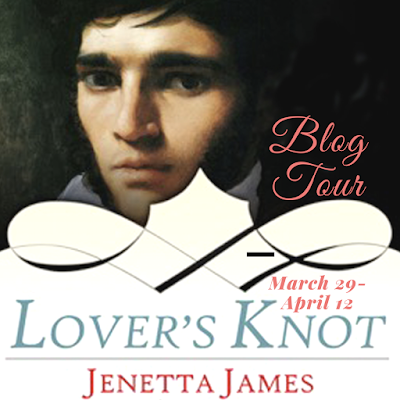 The one where Mr. Darcy turns detective: non JAFF detective fiction influencing Lover’s Knot (or Regency Sleuths whom I have loved…)

Thank you to Maria Grazia for having me back at My Jane Austen Book Club. It is a pleasure and an honour to visit with my new book, “Lover’s Knot”.

“Detective” is not an epithet that fits particularly well on the shoulders of Mr. Fitzwilliam Darcy. At least, not at first sight. The Regency is not the right period for a start, being well before the heyday of crime fiction and prior to the literary evolution of the “gentleman detective”. The formation of the police as we know and understand them had only just begun. What is more, fighting crime just isn’t what everyone’s favourite hero is about. Mr. Darcy’s world view was likely narrower than that of your average sleuth. He is, after all, a gentleman of the landed classes, a reluctant character of the ton, a man of means and a man of his age. His focus is family, home, close friends, dependants. He doesn’t look too hard at the wider world and nobody asks that he does.

But that doesn’t mean that, in the right moment, he would not do his bit to solve a crime. Mr. Darcy does after all have a sense of justice and a character willing to take unpopular steps. So I started to think that for him to turn detective - he just needed the right moment. That is what I try to give him in “Lover’s Knot”. In this guest post, I’d like to share the detective fiction that has most influenced me in casting Mr. Darcy as a detective. Because this is a Regency story, I particularly recommend my favourite Regency crime stories.

My love of detective fiction began with the one and only, Queen of Crime. Reading an Agatha Christie - or an “Aggie” as they were known in our house, was a mainstay of leisure when I was growing up. I loved too, the old TV adaptations. If I close my eyes, I can still hear the theme tune to the old Joan Hickson Miss Marples warbling away in the background. Over the years, I believe I have read them all, but a couple have special resonance and I suspect have influenced me in writing “Lover’s Knot”. The very first Poirot mystery - “The Mysterious Affair at Styles” - is probably my favourite. Captain Hastings - who accompanies Poirot on most, if not quite all of his adventures, tells the story. And there is something about his blundering assumptions that is reflected in the Mr. Darcy of “Lover’s Knot” part 1.

There are some wonderful Regency murder mysteries out there if you look. Would that there were more.

Most famously, there are the Sebastian St Cyr mysteries of C. S. Harris. Sebastian, Viscount Devlin is a complex soul who I dare you not to fall in love with. An aristocrat and an outcast, a former solider, haunted by evil. A lover, bound by honour and a sense of justice. A man of almost superhuman senses, seeing in the dark, protected by his own wits and physical prowess. Sebastian’s crime fighting career commences when he is falsely accused of a murder and forced to seek the real culprit himself. Thereafter, he becomes a sort of aristocratic sleuth - hunting down murders in all manner of Regency settings with Prinny and Jane Austen as walk on characters. In addition to the murder mystery in each story - the stories include politics, espionage and, courtesy of Sebastian’s chequered personal life, romance. There are 12 books in the series and a 13th coming this April (not that I am counting down the days or anything like that).

Much less well known, but wonderfully brilliant are the Julian Kestral mysteries of Kate Ross. A sad tale sits behind the obscurity of this inventive and intriguing Regency mystery series. And that is that Kate Ross died of cancer, tragically young, before she could complete the series. In consequence, there are only 4 books, and more questions than answers about our elusive detective. That does not stop him being a rival to practically any romantic leading man you care to name. If these books were better known, I feel sure that they would have sparked fan fiction for exactly that reason. As it is, we have four tales featuring Regency dandy and man of mystery, Julian Kestrel. The reader finds him in gaming hells and country house parties, houses of correction and Italianate mansions, solving mysteries and breaking hearts (as well as nursing his own, of course). He seems to flit between societies and, like Sebastian St Cyr, doesn’t quite belong anywhere.

What Sebastian St Cyr and Julian Kestrel have in common is that they are both able to access high society - an attribute they need to solve the crimes that they are faced with. Now, Mr. Darcy is in a similar position, of course. My personal view of him is that his foray into sleuthing would stop with a one off involvement. I cannot quite find a way of transforming Mr Darcy into a detective on a long term basis in my mind - I don’t think it quite suits him. I have tried to reflect this in Lover’s Knot - although readers shall be the judges of whether I succeed.

I would love to hear who amongst you has read either Sebastian or Julian? Or do you know of other Regency detectives that you recommend? 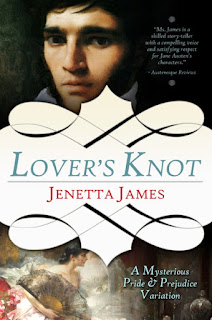 A great love. A perplexing murder. Netherfield Park — a house of secrets.
Fitzwilliam Darcy is in a tangle. Captivated by Miss Elizabeth Bennet, a girl of no fortune and few connections. Embroiled in an infamous murder in the home of his friend, Charles Bingley. He is being tested in every way. Fearing for Elizabeth’s safety, Darcy moves to protect her in the only way he knows but is thwarted. Thus, he is forced to turn detective. Can he overcome his pride for the sake of Elizabeth? Can he, with a broken heart, fathom the villainy that has invaded their lives? Is there even a chance for love born of such strife?
Lover’s Knot is a romantic Pride & Prejudice variation, with a bit of mystery thrown in.
ABOUT THE AUTHOR
Jenetta James is a mother, writer, lawyer and taker-on of too much. She grew up in Cambridge and read history at Oxford University where she was a scholar and president of the Oxford University History Society. After graduating, she took to the law and now practices full-time as a barrister. Over the years, she has lived in France, Hungary, and Trinidad as well as her native England. Jenetta currently lives in London with her husband and children where she enjoys reading, laughing, and playing with Lego. She has written, Suddenly Mrs. Darcy and The Elizabeth Papers as well as contributed short stories to both The Darcy Monologues and Dangerous to Know: Jane Austen’s Rakes and Gentlemen Rogues.
Contact Links: 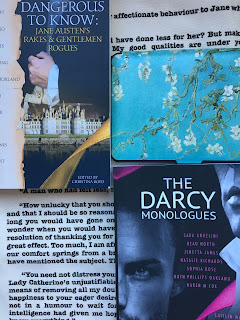 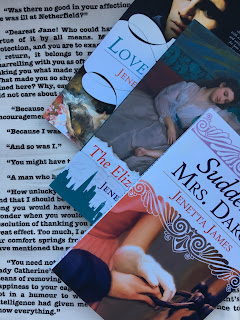 Jenetta has selected a lovely giveaway package where one lucky winner will receive a Pride & Prejudice scarf, a Kindle cover and paperback copies of all five of her JAFF books.

I only just started reading the Sebastian St. Cyr story line and quite enjoyed the three books I've finished. Now I'll have to look up Kate Ross. Nice post and good luck with your book launch/tour.

Welcome back to our online Austen club, Jenetta! My answer to your question is that I loved reading Lucinda Brant's Georgian Historical Mysteries with a fascinating detective called Alec Halsey as the protagonist. My reviews are on my FLY HIGH! blog. They were such fun to read!

Huge congratulations on your new release, Jenetta! I've not read either of the series mentioned (though they are now safely added to my TBR pile). I did try to read the Pink Carnation series but couldn't get into it. I love the mysteries written by Mary Stewart, though they're set in the 20th Century, her prose is timeless. I hope everyone enjoys Lover's Knot as much as I did!

Terrific giveaway, Jenetta! Can hardly wait to read your new book.
I've enjoyed the Sue Grafton books, and I'm very disappointed that she too was not able to finish her series.

I've never read Sebastian or Julien, but I find this fascinating. Congratulations on the new release!

I am so looking forward to reading this story. This is truly a lovely giveaway.

I have not read either of the two suggestions but will look into it. Elizabeth, Darcy and a mystery sounds like a perfect situation to me.

New to me. This all sounds marvellous thank you.

I am so happy that there will be a blog tour for this release as it’s already on my wishlist. I will certainly be following and look forward to learning more.

Love your books Jenetta! Happy to see you have a new book out!!!

Loved the Mr and Mrs Darcy books & a “cozy” murder tale is definitely something I enjoy. Have not read Sebastian or Julian yet. But added them to my wishlist, thank you for suggesting them :)

Maria thank you again for having me to "guest" and to everyone who has commented here - thanks for participating. I hope that a few people check out Julian Kestrel as those books are really except I will certainly follow up the names I hadn't come across. There are so many great books to read, aren't there?! Thank you all for your wonderful support of the Lover's Knot blog tour and happy reading:-)