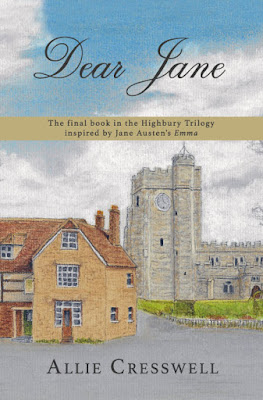 One of the joys and the challenges of writing Dear Jane has been regressing the characters of Jane and Frank to find out what formative influences made them into the young people who met at Weymouth and embarked on their foolhardy secret engagement.
Enscombe is imagined - by people who have never been there - as a very grand and superior house, equivalent, perhaps, to Rosings Park or even Pemberley. My Enscombe is quite different, a place of chill stone passageways and shrouded rooms. Its inhospitable accommodations and drear surroundings, together with Mrs Churchill’s utterly selfish sway over every aspect of Frank’s life, were my starting point in trying to understand the young man we meet in ‘Emma’.


Enscombe was a large house standing alone on the periphery of a broad-stretched Yorkshire moor. It was very imposing without being the least beautiful; old grey granite, very weathered; flat, utilitarian façades, a multiplicity of windows which managed to look blank and blind. No light shone from within and only the barest smudge of grey against the rain-laden clouds suggested a fire somewhere inside.
The last of the January snows lay on the moorland scrub. Black pools of peaty water shimmered with ice. The land stretched for mile upon mile; grey and featureless and unspeakably bleak. The way to Enscombe was long, straight and unmarked by tree or fence; only the coachman’s long familiarity with the way kept the horses on the narrow track, the carriage and its single occupant from foundering in the boggy pools or gravel pits which bordered it either side.
At last the carriage pulled up on the gravel forecourt of Enscombe. The ancient doorway opened just enough for a man-servant to come out. He descended the short flight of steps and opened the carriage door. ‘Good afternoon Mr Frank.’
The boy who stepped out of the carriage was about eleven or twelve years of age, with curly hair and an agreeable face. ‘Hello, Monks,’ he replied, cheerfully enough. ‘I didn’t expect to see you so soon. What’s happened? Is my aunt unwell?’
In fact Frank Weston had only been back at school about a fortnight before being summoned to the head master’s office and told he was to return home. He was to pack all his belongings. It was not certain if, or when, he would re-join his school fellows. ‘You are required at home, Weston,’ was the headmaster’s only explanation.
Monks began to supervise the removal of the trunks from the rear of the carriage. ‘Mrs Churchill is in the library, Mr Frank. I believe tea has just been served.’
Frank ran up the steps and pushed his way through the door, whose hinges got stiffer and less accommodating with every year.
‘I declare,’ the young man muttered to himself with a wry smile, ‘one day this door won’t open at all and we’ll all be imprisoned in Enscombe until we die of cold and starvation.’
The hall was large, chill and bare of furniture save a hard chair on which Monks or his deputy was permitted to sit during the hours of the night watch. Frank Weston crossed it quickly and made for a long, gloomy passageway which took him deep into the interior of the house. He passed half a dozen doors on either side, all closed, and a gallery beneath a high, glass atrium where marble statuary and enormous artworks were shrouded in sheeting. His footsteps rang and echoed as he walked, duplicating themselves five, ten, a dozen times. As a small child he had enjoyed this illusion, running up and down and shouting so that his little voice and stamping feet became a regiment in full battle cry. Of course his aunt had not liked it. He had been reprimanded often on account of being too noisy, too energetic, but that had not stopped him.
‘You are your mother’s son,’ his aunt had said, as though this were a bad thing, ‘undisciplined, wilful and wild. Monks, you must teach Mr Frank his manners.’
Monks had beaten him, but not hard.
Afterwards Frank had smiled at his aunt. ‘Thank you, Aunt. But I think I am also my father’s son.’
‘Too true,’ she had agreed. ‘It remains to be seen whether your defiance manages to grind your irrepressible good humour into submission, or vice versa.’
Frank Weston recalled this episode as he traversed the corridors of Enscombe. The occasional flickering lamp pushed back the shadows. Cold seeped from the walls and the floor, un-checked by carpet, curtain, wall-hanging or rug. At last he came to the door he sought, knocked gently and waited. Presently a thin shard of voice called, ‘Enter,’ and he went inside.
The room was comparatively warm; a fire burned in the grate and some dozen or so lamps illuminated the towering shelves of books, reflecting the room back in the tall crazed windows. What light there had been during the day had faded. ‘Good afternoon, Aunt Churchill,’ Frank said, crossing the room and placing a kiss on the cheek of the lady who sat before the fire. 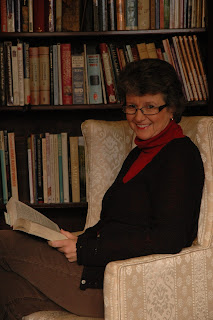 Allie Cresswell was born in Stockport, UK and began writing fiction as soon as she could hold a pencil. She did a BA in English Literature at Birmingham University and an MA at Queen Mary College, London. She has been a print-buyer, a pub landlady, a book-keeper, run a B & B and a group of boutique holiday cottages. Nowadays Allie writes full time having retired from teaching literature to lifelong learners. Most recently she has been working on her Highbury trilogy, books inspired by Jane Austen’s Emma.

She has two grown-up children, two granddaughters and two grandsons, is married to Tim and lives in Cumbria, NW England.

Thanks so much for being on the blog tour! Good luck to all the giveaway entrants

I always wanted t know more about Jane Fairfax. Thank you for the generous give away.