Hello everyone and welcome to our blog! What's new today? On release day, Monica Fairview answers a few questions about her "magical" Pride and Prejdice Variation: Dangerous Magic. Check our post and good luck in the giveaway contest! MG
How did you find inspiration for your new Pride and Prejudice variation, Dangerous Magic? 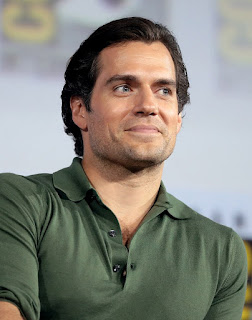 I’m a long-time reader of fantasy, and for some time now I’ve been imagining Mr. Darcy wearing a swirling cloak [I know, I know…😊) And as Maria Grazia knows already from my interview last year, I like to imagine him as Henry Cavill from ‘The Witcher’ (but without any of the gore, because I’m squeamish, and I don’t think Jane Austen would have approved).Once I started imagining Mr. Darcy as a mage (a mage is a wizard who doesn’t use a wand], I started imagining what kind of a world he would inhabit. I knew it was going to be solidly rooted in Jane Austen’s, just with the addition of magic. I quickly began to see how his relationship with Elizabeth would shape up.  From there, Before I knew it, I had planned the whole thing out. It was so exciting to start writing the novel – but also a bit nerve-racking [Mrs. Bennet’s nerves come to mind] because you have to get all the details of the world-building to fit together. Once I got past that point, the novel sort of wrote itself, which is unusual for me. I loved returning again and again to that fantasy world, especially during the dark days of the pandemic. It provided a perfect escape to an enchanted version of Jane Austen’s England that I would love to live in!Some of my early reviewers have compared DANGEROUSMAGIC to Harry Potter. I’m flattered, of course, because I think J.K. Rowling is amazing, but my novel doesn’t have any fantasy creatures, and the world-building is much simpler.

2.   Do you like reading fantasy novels? Do you have any good book or saga to recommend to our readers?

I love reading fantasy. We all read fantasy as children, of course, because a lot of children’s books have magical aspects, but somehow, I never stopped! I’ve read thousands of fantasy novels.  It would be hard to recommend anything specific, since there are so many subgenres, and there are some subgenres I don’t particularly like. The word ‘fantasy’ is so broad, it could include anything from comic stories about witches to much darker novels like George R. R. Martin’s Game of Thrones. I should confess right now that I’ve only watched the first episode of Game of Thrones. I’m not really a dark fantasy fan.

Most of us enjoy fairy tales. We’ve been raised watching Disney fantasy of one type or the other. I like fantasy that has that fairy-tale aspect to it. I could give you a long list of recommendations, but if you are new to fantasy, I would suggest reading Neil Gaiman’s Stardust, which is really charming. Of course, we have our own Jane Austen Magic authors such as Abigail Reynolds and Maria Grace, for example.

Gosh, there are so many things that need to change in the world right now, I wouldn’t know where to begin! Have you seen the film Miss Congeniality? An undercover female FBI agent joins a beauty pageant, and all the competitors give the same standard answer to the question. I think I’d have to do the same. If I had magic powers, I would use them for – world peace. 😊

4.     Let’s go back to our beloved Pride and Prejudice. What is it with Mr Darcy and Elizabeth Bennet? What makes them such an intriguing couple to inspire so many variations or sequels?  So much more than any other Austen couple, I mean.

There are many reasons for it, I think. I think Elizabeth and Darcy’s relationship embodies so many of the common tropes in romance: opposites attract; love across class barriers; hate turns to love, to name just a few. It’s amazing how Jane Austen managed to do that! And then there’s Elizabeth, who is a breath of fresh air to a Darcy who has become jaded– so much so, that the very idea that Elizabeth might actually reject his proposal is something he never even considered. We love Darcy because he doesn’t allow this major setback to impact him negatively. He is willing to change. We love him for a lot of other things, too, including the fact that, much as he loves Elizabeth, he lets her go and never stalks her! That is a huge point in his favor. He’s a good man. He also happens to be handsome, rich and dressed in gorgeous Regency attire. What more could we possibly want?

5.       How does magic come to affect our favourite Austen couple’s married life?

Magic has a huge affect on Elizabeth and Darcy’s life. The novel is a forced marriage scenario. They need to practice magic together because of the threat of Napoleon’s magicians, but – this being the Regency era – they cannot be left alone in a room together. So they have no choice but to get married without even having met before. Needless to say, each of them resents the other. Magic is woven into every aspect of their relationship, because the types of magic they practice are very different, and they both have to change their ways very quickly if they are to make a success of both their magic and their relationship.

6.    Is there a scene you particularly enjoyed writing in DANGEROUS MAGIC? Can you tell us about it?

One of my favorite scenes is a scene on the Thames River, when the two of them are alone in a boat. They are trying to learn something about each other. Darcy is rowing, and it’s almost midnight. There is some tension, because they are worried they might be spotted by Napoleon’s spies, but it’s a rare early moment of harmony between them, and a wonderful chance for them to discover each other. It’s not a major scene, but I really enjoyed writing it. Maybe that’s because we’re in lockdown and being out in the great outdoors is very appealing to me right now! In the context of the novel, though, the episode is the beginning of Darcy’s and Elizabeth’s journey towards love, the spark that lights the fire, so to speak. 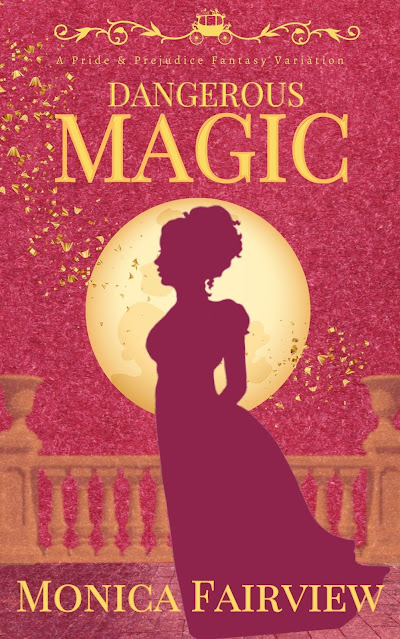 A sparkling tale of Regency England, a forced marriage, and two magicians who must work together to save the Kingdom.

Elizabeth Bennet is stunned when the Royal Mages come to her peaceful country home of Longbourn to take her away. She is even more bewildered when she is commanded to marry a powerful mage by the name of Fitzwilliam Darcy. She has always dreamed of marrying for love, and an arranged marriage with an arrogant stranger was never part of her plans.

Join the author of ‘Fortune and Felicity’ in this Jane Austen Fantasy Variation, an enchanting story of determination, love, and hope against all odds. 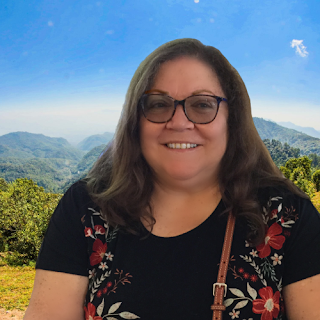 Monica Fairview writes Jane Austen sequels and variations as well as Regencies. Her latest novel is a Pride and Prejudice fantasy variation, Dangerous Magic. Her biggest claim to fame is living in Elizabeth Gaskell’s house in Manchester, long before the house was restored. After studying in the USA, she taught literature, then became an acupuncturist. She now lives near London.

Monica loves anything to do with the nineteenth century, and obsessively follows every period drama she can find. Some of her favorites are ‘North and South’, ‘Bright Star’ and ‘War and Peace’, and a dozen others that she couldn’t possibly list here. Of course, she has watched Pride and Prejudice (1995 and 2005) more times than she could count on her hands and toes.

Monica enjoys reading fantasy and post-apocalyptic novels but avoids zombies like the plague. She loves to laugh, drink tea, and visit National Trust historic properties [those were the days!], and she is convinced that her two cats can understand everything she says.

a Rafflecopter giveaway
Posted by Maria Grazia at 12:35

Enjoyed the interview and can definitely picture Mr Cavill as Mr Darcy. Fantasy is my favorite genre so I would love to read this! Congrats on the release.

Thank you, darcybennett! Wouldn't it be great if they had a new Pride and Prejudice with Mr Cavill? I would love that!

Good interview! I'm glad that you explained why they have to get married; I had wondered why they couldn't just go 'magic' together. Stupid Regency rules!

I set a reminder for your book this morning. You dont see many JAFF magical or fantasy books so I was really excited to read this today. I love the woven property's of their magic. I can't wait to see where this series takes us.

Tiffany, that's great to hear! I'm glad you enjoyed it. :)

Ginna, yes, the Royal Mages are very strict about women and men mixing. They have to control the bloodlines. So the Regency rules are even stricter.

I've dreamed of Henry Cavill as Mr. Darcy for years now, and I'm glad to have others who agree. I also have recently found a love for Regency paranormal, and this book is set to be a love of mine.

Thanks for the interview! And thanks for bringing magic to ODC! I am looking forward to reading this!

I love fantasy! This looks great :) Beautiful cover, too.

Thanks for offering a giveaway!

Suzan, so kind of you to say so! Coming from you, that's a great compliment.

Cythia, magic was a great escape for me last year, and I hope it will be for you, too.

Brittany, we really need Cavill in a Jane Austen adaptation!

I’ve never ever... ever pictured Cavill as Mr Darcy but after seeing that photo on FB (the one that brought me here ;-) ) now I can totally see it. Who would have guessed?

Unknown -- I'm just very happy you've been converted to having to my perspective... :)