CHOICE AND CONSEQUENCE, A PRIDE AND PREJUDICE VARIATION BY CHRISTINE COMBE

Greetings, fellow Austenians! I’m so excited to be visiting My Jane Austen Book Club to talk about my upcoming release Choice and Consequence, the second book in my What Might Have Been series. 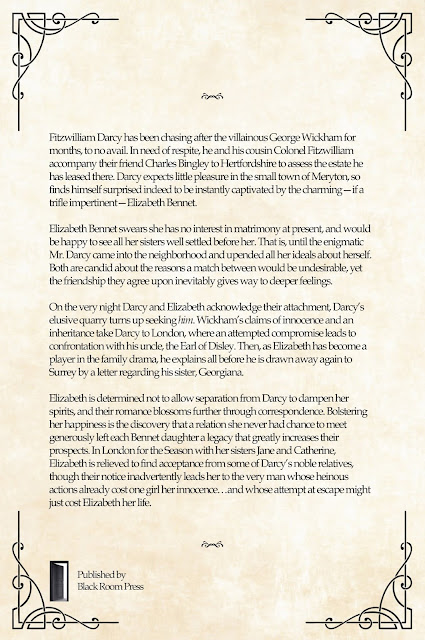 The timeline of this book starts at near the same point as the original. But instead of meeting at the Meryton assembly, Elizabeth and Darcy first meet accidentally at Oakham Mount one morning and have a brief but pleasant conversation. And although each was intrigued by the other, they don’t meet again until the assembly—where Elizabeth overhears Darcy make that unkind remark about her. He means it only as a joke to stop Bingley teasing him about his interest in the second Bennet daughter, and is able to apologize the next day after rescuing Elizabeth during a thunderstorm. After a heart-to-heart about all the reasons they shouldn’t become attached, they choose to be friends…but neither discounts the possibility of something more.

In this excerpt, Darcy believes his former childhood friend attacked his dear sister, but Wickham denies the accusation. Only the testimony of two unassailable witnesses can settle the matter…

Bingley knocked on the door before he opened it, allowing Lady Sotheby to enter first. He fell in behind her, then Darcy stepped inside with Fitzwilliam taking the rear. Lord Sotheby was not alone in the room—another man stood behind the desk at the window, his back to them. The build of the fellow, who wore a dark blue jacket, was vaguely familiar to Darcy, though he could not immediately think of who he might be.

“Thank you all for coming, I am sorry to have torn you away from your beguiling partners,” said Sotheby to the new arrivals from where he stood to the side of Bingley’s desk. He turned his head to the stranger then, and ordered him to turn around.

The man’s shoulders visibly tensed, and when he turned to face them Darcy vaguely registered shouting. Perhaps it was Fitzwilliam, perhaps himself—he could not say. He only knew that the moment he looked upon the bearded face before him, he felt a rage the likes of which he had felt only once before, on the night Lord Sotheby himself had described the attack on Georgiana.

“You!” This, Darcy knew he cried as he flew across the room and launched himself over the desk. His fist met the face of a man he had grown to hate with such a passion that even he had feared losing control of himself should he meet Wickham again in public.

Fitzwilliam, Bingley, and Lord Sotheby struggled to separate he and Wickham, and though at last they succeeded, Darcy made sure to get several solid punches to land.

“Come on, Will, settle down!” said Fitzwilliam as he and Bingley pulled him off to one side. “I want the bugger dead as much as you do, but you can’t just kill him.”

Wickham winced when he touched the split in his lip. “For goodness’ sake, Darcy, I know we didn’t part on the best of terms, but why would you want to kill me?”

“As if you don’t know!” Darcy seethed. “How dare you show up here after what you have done—to Georgiana, of all the innocent souls, Wickham! For God’s sake, how could you force yourself upon your upon her?!”

Wickham’s gaze when he looked to Darcy was one of incredulity. “Force myself…? Georgiana? Do you mean to tell me some vile pig—oh God, you think it was me?!”

He turned away a moment and ran his hands over his head. When he turned back to face Darcy, who was still being held tight by Fitzwilliam and Bingley, he said, “I don’t know who told you I did such a disgusting thing, Darcy, but I swear to you it wasn’t me!”

“Now you have the audacity to call Georgiana a liar?!” Darcy cried, and he struggled to free himself.

“I’m not calling her a liar, I’m saying it wasn’t me!” Wickham returned. “I would never force myself on any woman. There must be some mistake, because it couldn’t possibly have been me. I haven’t even set foot in England for six years!”

Their heads turned to Lady Sotheby when she spoke; Darcy had all but forgotten she was even in the room. She had stayed by the door but now moved across the expensive rug that spanned much of the width of Bingley’s study, her eyes searching Wickham’s face intently. She stopped before him, her brow furrowed, and then suddenly her eyes widened and she gasped.

“It’s not him.” She looked to her husband. “Alan, look at his face. What is different about it?”

“Forgive me, my lady, but he could have grown a beard since March,” said Fitzwilliam.

“I’m quite well aware of that, thank you, Colonel,” Lady Sotheby retorted. “I do not refer to the existence of facial hair. Besides Miss Darcy and our two coachmen, only my husband and I saw the man she said attacked her, the man who had so brutalized and terrified that poor girl that she was willing to throw herself on the mercy of strangers in order to escape him.”

She turned her gaze from Fitzwilliam to Darcy. “This is not that man.”

“You told me she identified George Wickham as her attacker,” said Darcy.

“That is correct, Mr. Darcy,” Sotheby replied. “But either that man was not George Wickham, or this one isn’t.”

“How can you be sure this is not the man you met?” asked Bingley.

Lord Sotheby pointed towards Wickham’s face. “The man we met that day had a scar that bisected his left eyebrow. This gentleman does not.”

“I am George Wickham,” said the man who stood beside him. “I spent the whole of my first eighteen years on the Pemberley estate in Derbyshire. I attended Cambridge with Will, though I was a year behind him. Wasn’t the best student—wasn’t a decent man, either. I’m sure he’s told you all about that. I became an angry little boy after my parents died and left me alone, and though George Darcy treated me as a second son that anger festered, because I knew I was not. I did not sleep in the family wing, I remained in servant’s quarters. My peers at Cambridge certainly never allowed me to forget that I was a charity case. My anger festered and—forgive me, madam—I engaged in gambling, drink, and debauchery in a vain attempt to drown my pain.” 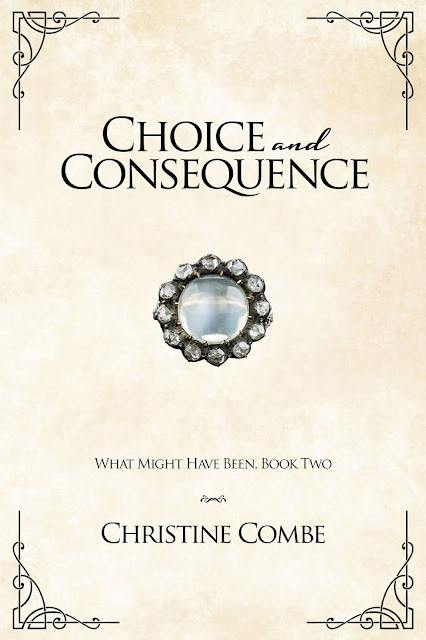 What’s this—a Wickham changed?! There’s definitely a lot going on here and a lot more to come. Thanks again to Maria Grazia for hosting me today. Choice and Consequence is available for pre-order on Amazon and will publish May 5th! 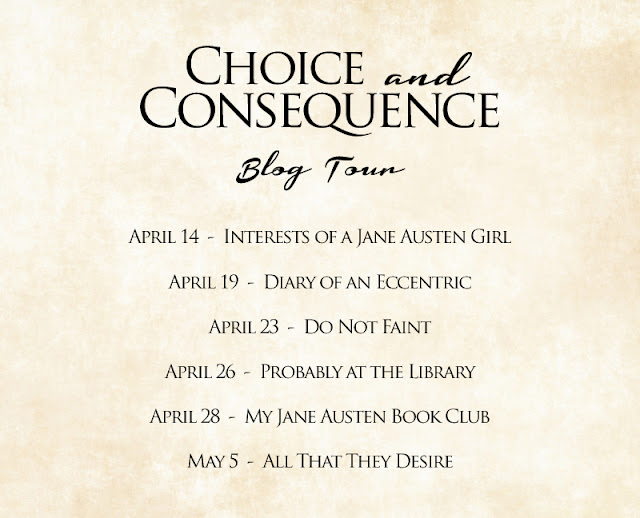 Such an intriguing little excerpt!

Gets more interesting. I feel bad for Georgiana however. Eager to read this variation.Thank you for the excerpt.