THE MURDER OF MR WICKHAM BLOG TOUR: READ AN EXCERPT 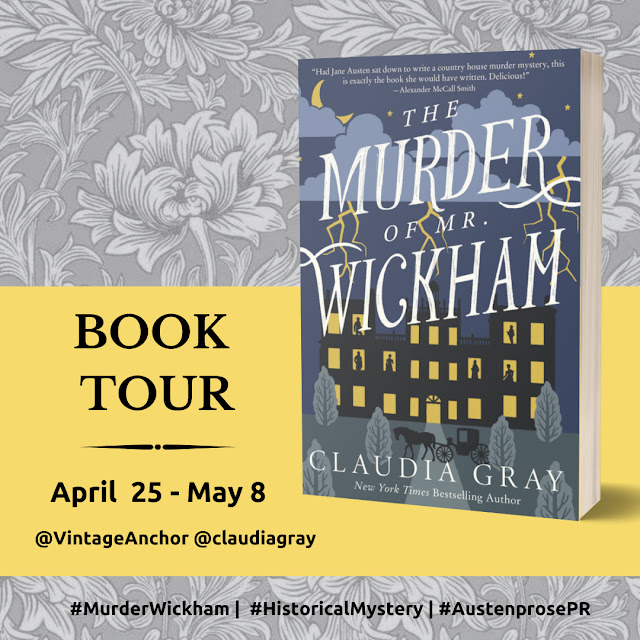 Here I am with a new awesome book recommendation, an Austen-inspired murder mystery novel perfect for you,  in which a summer house party turns into a thrilling whodunit when Jane Austen's Mr. Wickham—one of literature’s most notorious villains—meets a sudden and suspicious end.  Scroll down and enjoy discovering more about Claudia Gray's The Murder of Mr Wickham! MG

The happily married Mr. Knightley and Emma are throwing a party at their country estate, bringing together distant relatives and new acquaintances—characters beloved by Jane Austen fans. Definitely not invited is Mr. Wickham, whose latest financial scheme has netted him an even broader array of enemies. As tempers flare and secrets are revealed, it’s clear that everyone would be happier if Mr. Wickham got his comeuppance. Yet they’re all shocked when Wickham turns up murdered—except, of course, for the killer hidden in their midst.
Nearly everyone at the house party is a suspect, so it falls to the party’s two youngest guests to solve the mystery: Juliet Tilney, the smart and resourceful daughter of Catherine and Henry, eager for adventure beyond Northanger Abbey; and Jonathan Darcy, the Darcys’ eldest son, whose adherence to propriety makes his father seem almost relaxed. In this tantalizing fusion of Austen and Christie, from New York Times bestselling author Claudia Gray, the unlikely pair must put aside their own poor first impressions and uncover the guilty party—before an innocent person is sentenced to hang. 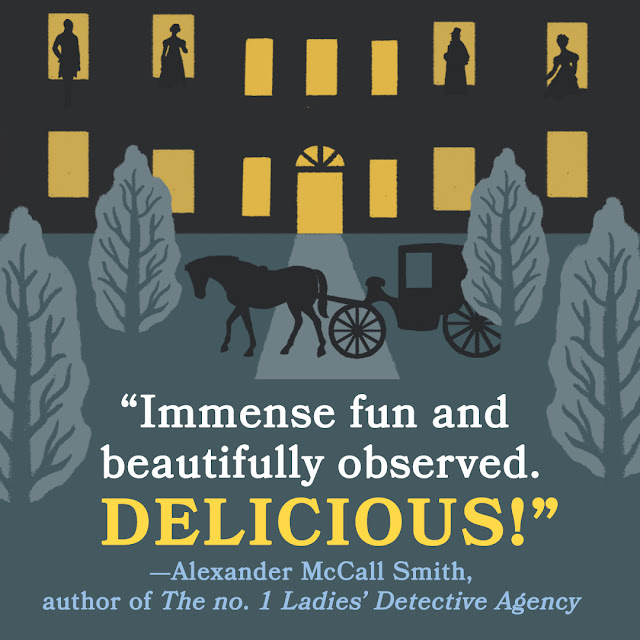 “Had Jane Austen sat down to write a country house murder mystery, this is exactly the book she would have written. Devotees of Austen’s timeless novels will get the greatest possible pleasure from this wonderful book. Immense fun and beautifully observed. Delicious!” —Alexander McCall Smith

“What a splendid conceit! . . . Gray provides plenty of backstory and enough depth to her characters that even those who mix up their Pride and Prejudice with their Sense and Sensibility will delight in the Agatha Christie–style mystery. . . . There’s so much fun to be had in this reimagined Austen world—and the mystery is so strong—that one can only hope, dear reader, that more books will follow.” —Ilene Cooper, Booklist (starred review)

“[An] enchanting mystery. . . . Gray perfectly captures the personalities of Austen’s beloved characters. This is a real treat for Austenites.” —Publishers Weekly
“Who would NOT want to read a book in which one of literature’s most notorious rakes meets his final demise? . . . A delightful Agatha Christie meets Jane Austen romp.” —Laurel Ann Nattress, Austenprose 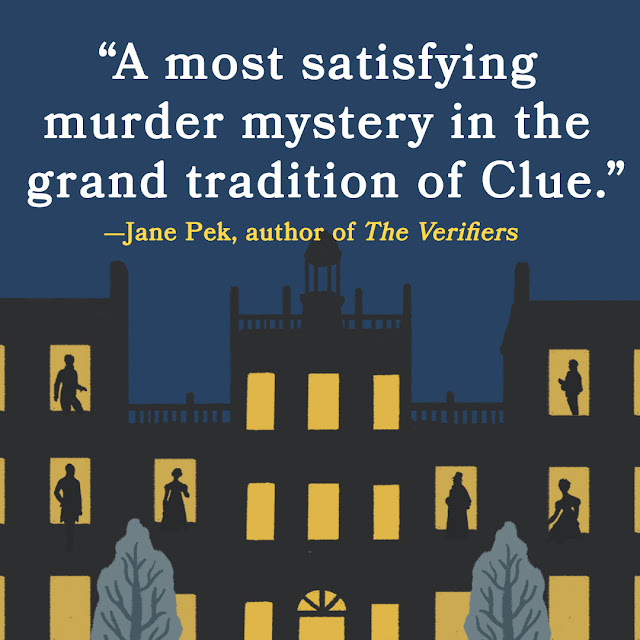 (from The Murder of Mr. Wickham, by Claudia Gray)

Three times now, Fitzwilliam Darcy had believed himself permanently rid of the odious presence of George Wickham. Three times, he’d been wrong. The division eight months ago had seemed as though it had to be final, but no. Fate could be pernicious.

“Ah,” Wickham said, strolling forward. “I see my timing is inopportune. In the city, you see, the fashion is for later dinners.”

Knightley stood, pale and drawn. He looked as though he loathed Wickham as much as Darcy did. “You would not have been invited at any hour.”

Wickham’s smile widened. Somehow, in the heart of a confrontation, the man managed to seem even more at ease. “If I waited for an invitation to receive that which is mine in right of law—yes, Mr. Knightley, I imagine my wait would be very long.”

Knightley’s lips pressed together. Emma’s face had flushed with ill-repressed anger. Nor were they the only persons agitated at the table: Wentworth’s expression was dark, and his wife had tensed, as though she expected to have to fly from her chair to hold him back. Worst of all was dear Elizabeth, frozen like ice in her seat; her fingers were wrapped tightly around the hilt of her dinner knife. Jonathan’s distrust of his uncle clearly warred with his concern for his mother.

As for the Brandons, the Bertrams, and the young Miss Tilney: they each appeared deeply confused by the sudden, severe deviation from common civility. Therefore, none of them had ever met George Wickham before. Darcy envied them the privilege.

A loud clap of thunder rumbled through the air, the house, the ground itself. In the next instant, raindrops began to pelt the windows and ground, striking the windowpanes until they rattled.

Darcy could’ve cursed aloud. To judge by the hoofbeats he’d heard outside earlier, Wickham had arrived on horseback rather than by carriage, and not even the most odious company would be thrown out in such weather. Particularly in such hilly country as this corner of Surrey—to attempt to ride in a severe thunderstorm risked the health and nerves of one’s horse, and even one’s life.

Wickham raised an eyebrow, as aware as anyone of the etiquette that imprisoned his hosts. “It seems I shall be staying for a while.” 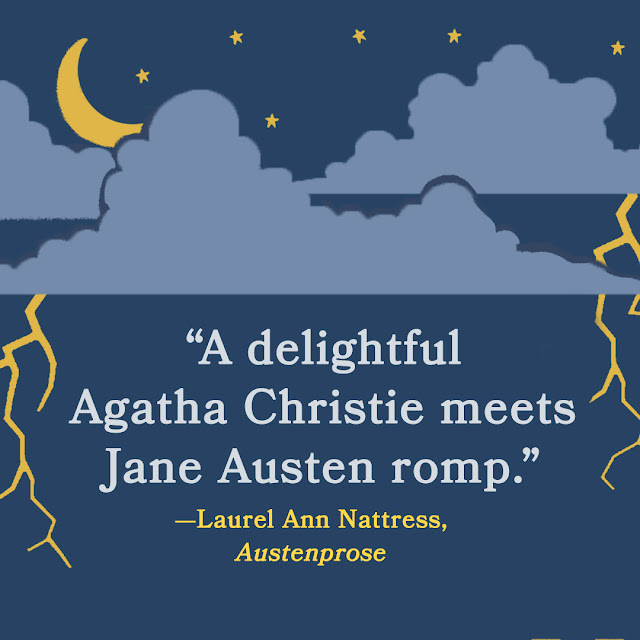 “I fear we cannot accommodate you at the table, Mr. Wickham.” Mrs. Knightley pushed her chair back as abruptly as an ill-mannered child. Jonathan would’ve been scolded for less, as a boy. She said, “Allow me to get you settled, and the servants will bring something up to you for dinner.” With that she strode out of the room. After a moment, Wickham inclined his head to the table—an ironical half bow—then followed her.

Had she done the right thing? The normal rules could not apply to such a situation as this. Jonathan would’ve resolved to ask his parents later had they not appeared so stricken. No, he would be left to interpret this for himself.

A silence followed, empty of words and yet suffocatingly heavy. Finally, Knightley cleared his throat. “My dear guests, I must beg your pardon. The gentleman who has arrived is . . . no friend to this household. Yet there are matters between us that must be resolved.”

“He seemed insolent in the extreme,” said Mrs. Brandon, astonishingly forthright. “What a disagreeable person.”

In any other circumstances, Jonathan might’ve found such a pronouncement rude; tonight, people seemed freed to speak their thoughts—and to the whole table, at that. Understandable, perhaps, but in his opinion it set a dangerous precedent.

“George Wickham is indeed disagreeable,” Knightley agreed, “however skilled he is at pretending otherwise.”

Brandon spoke for the first time at dinner. “Did you say—Mr. George Wickham?”

Knightley nodded. “A former army officer, who now fancies himself an arranger of investments. Bah! Investments that work to his own gain and everyone else’s loss.”

“Certainly to ours,” Wentworth said, his voice hollow.

But she rallied swiftly, turning to Darcy and asking very civilly, “How are you acquainted with Mr. Wickham, sir?”

“We grew up together in Derbyshire,” Darcy said. Brandon’s fork clattered against the dinner plate. Jonathan wondered—How could anyone continue eating at such a time? “He was the son of my late father’s steward. As adults, our ways parted for many years.”

To his surprise, it was Mother who spoke next. “Then Mr. Wickham married my sister Lydia.”

And Lydia and George Wickham had had a daughter.

For a moment, Jonathan remembered Susannah so vividly that she might’ve been sitting at his side, giggling as she so often did, dark curls framing her round, smiling face. To him, she had been more sister than cousin. To his parents, Susannah had been more daughter than niece. He knew himself and his brothers to be dearly loved, but he knew also that for many years his mother and father had longed for a little girl that never came.

Then, eight years ago, Susannah had been born—the belated first and only child of his aunt and uncle. Neither Aunt Lydia nor Uncle George had possessed much interest in the daily tedium of child-rearing; as soon as Susannah had left her wet nurse, she had been packed off to Pemberley for lengthy visits. Indeed, Susannah had spent far more of her short life in his home than she ever had with her parents. This suited everyone: Mother and Father, who doted on the child; Jonathan and his brothers, who were old enough to find her odd little ways amusing rather than irritating; Aunt Lydia and Uncle George, who showed no evidence of ever missing their daughter; and Susannah herself, who wept piteously before each of her journeys home and always ran back into Pemberley as fast as her small legs would bear her.

She would never run through the doors again. 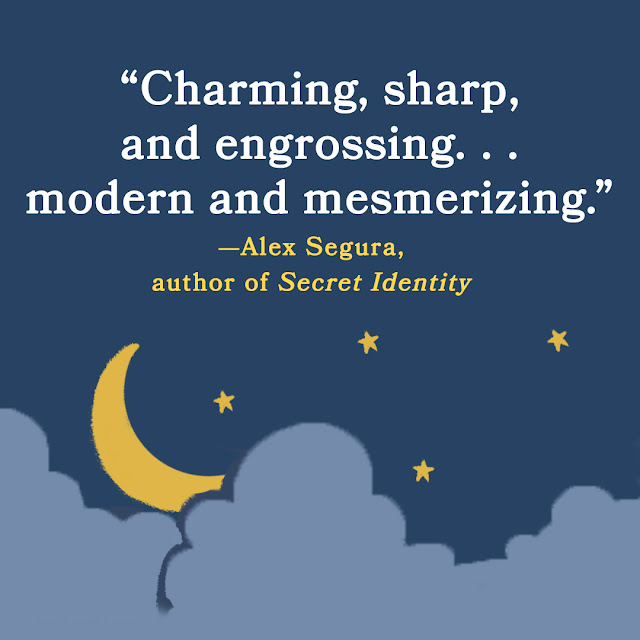 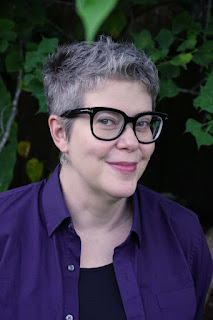 Claudia Gray is the pseudonym of Amy Vincent. She is the writer of multiple young adult novels, including the Evernight series, the Firebird trilogy, and the Constellation trilogy. In addition, she’s written several Star Wars novels, such as Lost Stars and Bloodline. She makes her home in New Orleans with her husband Paul and assorted small dogs.

I enjoyed the mystery

Thanks for sharing, Maria. It was fun to have many of Austen's main characters together at a house party. I hope the author continues the story of Jonathan & Juliet.

In canon printers, they have made it easy to replace the finished cartridge. The cartridges are provided with the printer so that you don’t need to buy them separately. When the cartridges finish then you need to buy a new one.

I am Rakhi Yadav, a Content Writer in Success Dunia. There are Lots of Distance Education Universities that are Running in India and According to Students Opinion, The IGNOU University is their First Choice. There are Lots of Reason Behind This, The First is the Syllabus of IGNOU is Student Friendly that’s Why Students Like this So Much, Compared to All. ​IGNOU Admission Process is Also Simple, and 2 Times in a Year Students Can Get Admission Here, the ​IGNOU Exam Process is also So Simple, Because there are Lots of Exam Centres are Available in India, So that Students Can Comfortably Give Exams in Their Suitable Location. But Before Giving Exam Students Should Make IGNOU Assignment Status First.

Reading a mystery book after a long time and enjoyed every bit of it. The story was amazing and mysterious it was reading it and finding the mystery in it. I love to read this kind of book which builds interest for the readers.