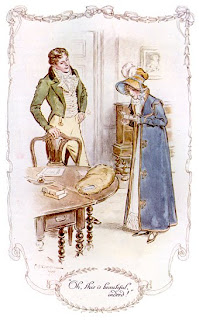 I've been searching and reading to find ideas to animate our debate about Mansfield Park next Friday. I've got some themes and topics to propose. Few of them are the same you can find in Austen's other major novels but there are also new ones in this controversial novel.
Here are my proposals. I'd really appreciate if you had and suggested other threads for discussion.
Principles
While characters like Edmund and Fanny feel that morals are universal rules, and are right for everybody, others take a much more relative view of morals.
Many characters reflect on what is good and proper behaviour and what is  wrong, lax behaviour.
Language and communication
This miscommunication and lack of communication play a bigger role in Mansfield Park than good communication. Whether communicating verbally or non-verbally, characters are frequently misunderstood, fail to make themselves clear, and misunderstand others. (The role of letters) 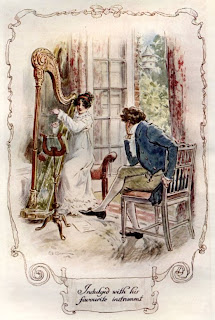 Comedy
Mr Rushworth and Mrs. Norris . They are funny in their pomposity and their lack of intelligence but  their place in the plot is deadly serious. Rushworth represents the negative side of marrying for money; he is dreadful to know and completely incompatible with Maria.  Mrs. Norris is a deliberate caricature. Her hysterical insistence on preserving social distinctions is responsible for much of the mistreatment Fanny receives.
Passivity
One of the major divides in Mansfield Park is between action and passivity. Characters are largely defined by their active or their passive natures, and this division extends over into other contrasting traits: talkative characters versus silent ones, moving ones versus still ones, etc.
Marriage
Many of the marriages in this novel are based on money and social position.  Austen depicts many of her characters as caught up in either money or extremes of emotion.
For women in particular, marriage is an opportunity to rise up the social ladder. Lady Bertram, for example, becomes a wealthy woman through marriage, while her sister Mrs. Price ends up in poverty after marrying a sailor. As a result, when considering marriage, love often takes a backseat to more practical concerns. The ideal marriage, in this world, is one based on companionship. Despite their flaws, Sir Thomas and Lady Bertram truly seem to value each other's company. The ideal mate for someone like Fanny would be a man with whom she is intellectually and emotionally close without physical attraction playing too excessive a part. Edmund is perfect, since he is like a brother in his manner toward her but not actually her brother. 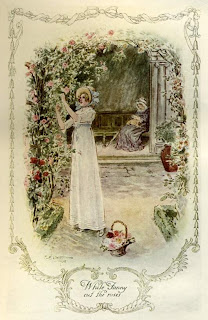 Love
Love is not logical, predictable, or even controllable. In Mansfield Park, characters constantly fall in love with people they'd rather not love. They fall for people who don't love them back, they try to love people whom they can't, and they try to fall out of love with people and fail. Love is very messy and very confusing here. It challenges characters' attitudes and preconceptions.
Family
What kind of role does family play in the development of an individual's character? Can a good person come from a bad family, or vice versa? Which is more important--someone's innate qualities, or the way they were raised? Are the characters that end up revealing some serious character flaws born that way, or is it a result of their parenting? In addition, most of the families we see aren't very happy ones. Blood may be thicker than water, but it isn't thicker than things like income or clashing personalities in this novel.
Slavery 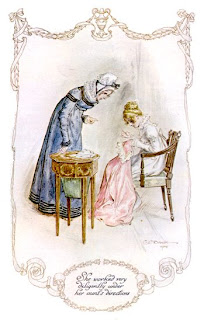 Slavery in Mansfield Park is background, not foreground. The allusion to slavery used to suggest the fatuity and ignorance of each and every member of the younger generation at Mansfield Park. Fanny  would have liked to ask Sir Thomas a question about the issue  except everyone else is so bored to tears by any serious subject so she drops it.
There is not such emphasis on slavery in Mansfield Park. Rather the allusions to slavery are used emblematically to tell us things about the characters which are not necessarily to tied to any notion that a slaveowner is necessarily evil or corrupt or deeply wrong in his character or values. Far from the more simple interpretation that Sir Thomas is to be taken as corrupt because his wealth is based on slavery, Austen presents him as a complex real man in a real world; he is a serious person who works hard, and is weary and exhausted and has had severe caustic moral lessons dealing with the whole of his experience in Antigua .
Theatre
Jane Austen's inclusion of Lovers' Vows in Mansfield Park has engendered a debate about her attitude torward drama and stage performances. (Interesting essay:  Penelope Gay, Theatricals and Theatricality in Mansfield Park )

Wow, Maria! I think you got all the themes of the novel down!

This is totally coming from a book I'm currently reading, but in it the author stresses how women at that time period weren't just choosing husbands, they were choosing careers. The role of wife changed with the occupation of the husband whether it be clergyman, naval captain, landowner. It made me think of Mary Crawford, perhaps her aversion to Edmund being a cleryman was more about her than it was him. Perhaps she aspired to a better or higher occupation in life than a clergyman's wife. Maybe she wanted to be a landowner's wife? (Not sure if this at all made sense!)

I so very much wish I could be there for your next meeting! Good luck!

@Meredith
It makes perfectly sense, Meredith. May Crawford's aspitayions and temper, her love for wordly pleasures were huge obstacles to her being a good clergyman's wife. And she knew.

My favorite Mansfield debate regards the duality of our heroes and heroines. The Crawford are definitely cast by Austen as antiheroes, but so many fans of the book prefer them to the real heroes, Fanny and Edmund, despite their deplorable morality. The whole book can be viewed as a discourse on the firm morality of the country and the corrupting influence of the town (particularly interesting when you think that this is Austen's first book since returning to the country from Bath). Even though all careful readers of Austen know the Crawfords are corrupt, their popularity amongst readers demonstrates just how appealing urban sophistication is next to rural reticence. We are tempted by Mr. Crawford just like Maria is.

I agree with Alexa. I think that it would be a great idea to include a discussion about why so many readers prefer Mary and Henry to Fanny and Edmund. Some readers are even disappointed with the ending of the book and think that Fanny ends up with the wrong man!

Wow! You covered everything! I can't think there's anything left! I hope you'll have a great discussion!

@Alexa, Viola, Luciana
Thanks for your comments and suggestions. Of course, it'll be very interesting to discuss about the hero , heroine and their wordly counterparts. I'm just not so sure Jane Austen wanted us to take Fanny as a model. I suspect instead a certain ... interest in Mary Crawford and her ways, especially her complete freedom. The narrator is so often ironic to Fanny's behaviour too... let's see what my mates will say about Fanny, her choices, Mary , her brother...I'm so curious!