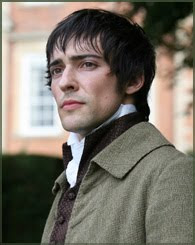 I found this interesting comparison in an analysis of Edmund Bertram's character on line: Edmund has a lot of things in common with a Greek guy named Pygmalion. In the myth, Pygmalion was a sculptor who made a piece representing his ideal woman and then fell in love with her. In a sense, Edmund, too, created his own ideal woman – Fanny – and eventually chose her over the real, complicated, and imperfect Mary. Speaking to Fanny, Edmund notes, "I am glad you saw it all as I did." The narrator adds, "Having formed her mind and gained her affections, he had a good chance of her thinking like him" . I totally agree with it. What about you?
As Fanny is - in a moralistic outlook - the prototype of the model heroine, Edmund can be considered her male counterpart: 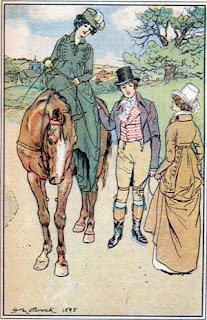 she is modest, generous, good-hearted and he is the moral conscience  of the book – he disapproves of the play, he lectures people, he becomes a clergyman, and he's often judgmental. Though, he has got a flaw (not in my opinion!) : his love for wordly Mary Crawford . In his relationship with Mary, he shows signs of changing . Edmund opens himself up to someone new and different , he is passionately in love with her, totally intrigued, and sincerely wants to marry her. But Edmund never fully seems to be willing or able to change himself in order to compromise with Mary. Rather, he expects her to do all the changing: "The issue of all depended on one question. Did she love him well enough to forego what had used to be essential points – did she love him well enough to make them no longer essential? "
In Mansfield Park we watch Edmund mostly through Fanny's eyes and we know she can't be objective.
What is puzzling is that we get very limited details about Edmund's relationship with the woman he eventually marries- he acts like an affectionate older brother to Fanny until the very end of the book, where the narrator gives us a brief account about how he fell in love with Fanny. Definitely unsatisfying to those who seek for romantic moments in Austen ( there are still so many!). We know a lot about Fanny's love for Edmund, but we don't get much of the reverse at all.
Anyhow, we can say he is a romantic hero, at least, in Fanny's eyes. He seems to live two parallel lives: one in the reality of facts in his turbulent relationship with Mary, the other one in Fanny's mind and heart, where he is irreprehensible, affectionate, sensitive.
Edmund can be considered an improvement of the character of Edward Ferrars (Sense and Sensibility) as properly suggested in an interesting essay by Ellen Moody, a Lecturer in English at George Mason University, titled In Defense of Edmund Bertram.

Now a game to play with Edmund. I messed up the timeline of his life in the novel. Can you re-arrange it? (put the letters in the right order). The key in my next post!
a. Edmund opposes the play but decides to act in it in order to avoid inviting a stranger over.
b.He and Mary have a major debate about the clergy while visiting Mr. Rushworth's house
c. Edmund accepts blame for the play when his father returns home.
d. Edmund then leaves to take his orders in the church
e. He often speaks up for Fanny when his mom and Aunt Norris mistreat her.
f. Before Fanny attends her first ball, Edmund gives her a chain for her cross.
g. He has a part opposite Mary and the two have a love scene together that they rehearse with Fanny's help.
h. Edmund writes to Fanny in Portsmouth and updates her on his trip to London to see Mary
i. Edmund then cares for his brother Tom when Tom falls ill
j.When Edmund returns he tries to convince Fanny to marry Henry.
k.Later Edmund marries Fanny and the two move into the Parsonage at Mansfield.
l. He picks up Fanny and Susan from Portsmouth.
m. His relationship with Mary continues to progress.
n. He is still wavering about what to do about Mary.
o. Edmund is nice to his little cousin Fanny after she moves in.
p. As an adult, Edmund remains the responsible son and plans to be a clergyman
q. Edmund continues to waver back and forth on his feelings for Mary, due to their many differing      beliefs.
r. Edmund fills Fanny in on his break-up with Mary.
s.Edmund is intrigued by Mary Crawford and begins falling for her.
Posted by Maria Grazia at 10:00

Very interesting character analysis. From my perspective, I always thought Mr. Ferrars infinitely preferable to Edmund Bertram. There is another flaw in this gentleman you do not account for - he may arguably be the moral conscience of the book, but he does not obey his own instincts. He rationalizes his involvement with the play though he knows his father would not approve. He sees the moral ambiguity in Mary Crawford but blames it on her upbringing and environment. Fanny says to Mr. Crawford, "We have all a better guide in ourselves, if we would attend to it, than any other person can be." I think it's advice Edmund would benefit from as well.

I agree with Alexa, I also prefer Edward, although he's not very high in my steem too. I don't like Edmund at all! The guy I really like in this novel is Henry. I know for Jane Austen's purposes he couldn't be changed, but I truly hoped he would become a good guy. Edmund is strange, I don't know why, but even being so good to Fanny and everything if I were her I'd never fell for him...