JANE AUSTEN AND THE THEATRE 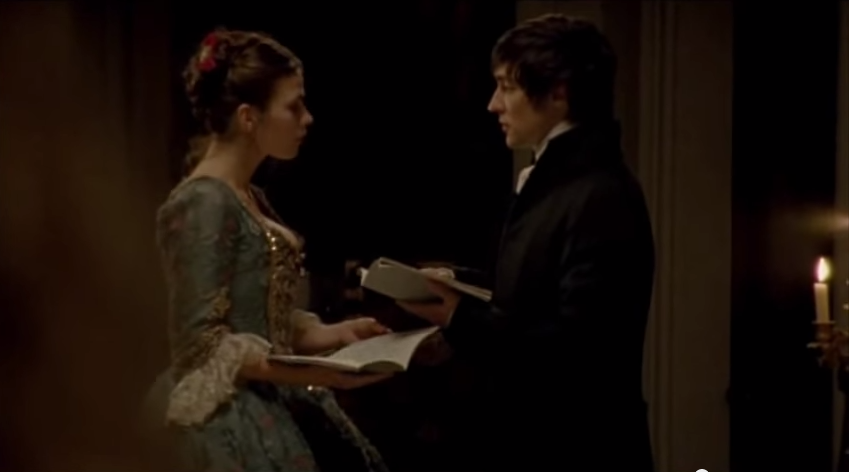 "A love of the theatre is so general, an itch for acting so strong among young people”
(Masfield Park p. 121)


This observation was surely based on JA’s autobiographical experience. Have a look  at this clip  from ITV Mansfield Park 2007 and you'll get a glimpse of what I'm going to discuss today.
While re – reading Mansfield Park for My JA Book Club at the public library, I searched for and found some materials about Jane Austen and her attitude to theatre. In Mansfield Park the main characters are involved in a theatrical performance by Tom Bertram. He suggests to perform  Lovers’ Vows while Sir Edmund is away from home (as you can see in the clip above).

What is Jane Austen’s intention at including such a theatrical performance in her novel? Through Edmund’s objections, she seems to convey the idea that to indulge in such a pastime, especially using that kind of play, could be risky and even immoral.

'I think it would be very wrong. In a general light, private theatricals are open to some objections, but as we are circumstanced, I think it would be highly injudicious, and more than injudicious to attempt any thing of the kind. It would show great want of feeling on my father's account, absent as he is, and in some degree of constant danger: and it would be imprudent, I think, with regard to Maria, whose situation is a very delicate one, considering every thing, extremely delicate.' (p. 125)

'It would be taking liberties with my father's house in his absence which could not be justified.' (p. 127)
But was this really the idea she had of drama, theatre and plays in general?

In search for an answer to this, I’ve been leafing through the studies of Prof. Penelope (Penny) Gay , Sydney University, on Austen and the Theatre.

Jane Austen’s experience of the theatre 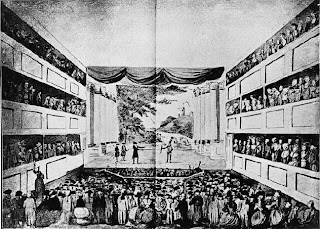 (Orchard Street theatre in Bath at Jane Austen's time)
Several biographers and scholars have written about Jane’s years at Steventon and about the fact that plays, both contemporary and classic , were evidently available for reading and for the production of home theatricals. Jane’s elder brothers probably brought the “itch for acting” ( Mansfield Park) home from Oxford and this resulted in a series of domestic productions in 1782-90. The reading of plays seems to have been part of the regular family’s after-dinner pastimes.
Clearly the Austen family preferred comedy to the opportunities for ranting and risibility offered by contemporary tragedy: and like Edmund Bertram and Henry Crawford they probably thought of Shakespeare as more suitable for reading aloud than getting up as a performance.
Claire Tomalin in her biography of Jane Austen argues that “plays may have been a feature of Jane’s and Cassandra’s education” in their brief stay at the Abbey School in Reading (1785-86).

The evidence of Austen’s knowledge of plays and tragedies since her very young age is in her juvenilia, which include “The visit”, “The Mystery” and “ The First Act of a Comedy” - clearly parodies of plays - but also in some passages of “Love and Freindship”   or in her five-act play which was an adaptation of Richardson’s monumental novel, “Sir Charles Grandison”. 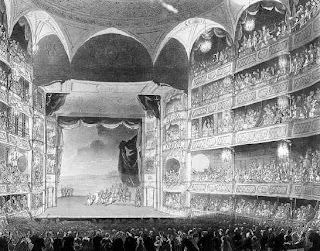 (Drury Lane Theatre in 1794)
Jane Austen, during her visits to England’s first and second fashionable cities – London and Bath – in 1796, 1797 and 1799, went to the theatre and may well have seen the great stage stars of the London stage of those days, Sarah Siddons and her brother, John Philip Kemble. But the only plays Austen actually known to have seen in this period were in 1799 at Bath: Kotzebue’s The Birth-Day (adapted by Thomsa Dibdin) and Colman’s Blue Beard, or , Female Curiosity! – a “pleasing spectacle”.  Margaret Kirkham has drawn attention to the similarities of plot and theme between the domestic comedy in The Birth-Day and Emma.

This and many other parallelisms,  as well as biographical anecdotes linked to the theatre  or  references to the drama in  Jane Austen’s time,  are what you can find in this interesting essay I’ve been leafing through : Penny Gay, "Jane Austen and the Theatre", Cambridge University Press, 2002.

But what is more interesting in this essay is the research on the influence that the theatrical experiences in general had on Austen’s major works. For example, in  Mansfield Park. But not only. The seven chapters are,  in fact, dedicated to: 1. Jane Austen’s experience of the theatre; 2. Sense and Sensibility – comic and tragic drama; 3. Northanger Abbey: Catherine’s adventures in the Gothic Theatre; 4. Mansfield Park: Fanny’s education in the theatre; 5. Emma: private theatricals at Highbury; 6. Persuasion and melodrama

“The plays performed in the Steventon home theatricals during Austen’s childhood present a conspectus of late 18th century fashionable comic theatre. Arguably these performances, and –perhaps more importantly – the bustle and excitement that inevitably accompanies “putting on a show” had a profound influence on the young writer, alerting her both to the seductive power of theatre and to the ambivalence of acting “ (Penelope Gay, p. 8)

Theatricals and Theatricality in Mansfield Park 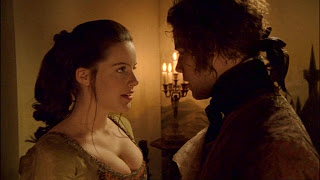 Another interesting short essay by the same author, Penelope Gay, is an analysis of “Theatricals and Theatricality in Mansfield Park” ( you can download it here)
She studies,  among other features,  the play within the novel, Kotzebue’s  Lovers’ Vows and its role :

“Kotzebue's Das Kind der Liebe, or Lovers' Vows (literally 'The Love Child' - but Mrs Inchbald had to make even the title 'fit for the English Stage') is an excellent example of the new form. It had an enormous vogue in England in the 1790s and early 1800s; Jane Austen would probably have seen it performed during her residence in Bath. The elements that were to develop into fullblooded Victorian melodrama are almost all there: the exotic and! or rustic setting (Castle and Cottage rather than the Town of English comedy), violent action (Frederick's attack on the Baron), a flirting with risque subjects, and perhaps most significant, the clash of the classes, in which a 'new morality' is adumbrated: the poor are essentially virtuous, even when betrayed into breaking the moral law - they are always forced into this by depraved aristocrats - the upper classes are inevitably corrupt. (…) 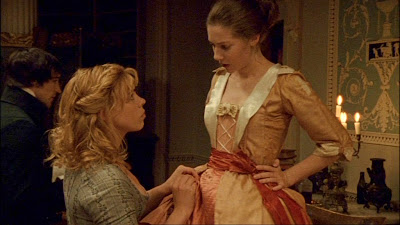 So did I find the answer I was looking for? What is JA’s relationship with drama and theatrical performances? What is the function of  Lovers’ Vows in Mansfield Park?
Here's Penelope Gay's answer in the second essay mentioned :
The course of events shows that the theatricals, and the choice of Lovers' Vows in particular, were an extremely unwise undertaking for excitable young persons in a fatherless household; but the novel itself echoes some (though decidedly not all) of the revolutionary sentiments of the vulgar contemporary play.
She concludes: I have tried to show how the novel's disapproving fascination with theatricality informs and indeed structures its moralizing intent.

Exactly the words I needed “disapproving fascination”. An oximoron conveying Jane Austen's fascination for what morals and perbenism banned as wrong and evil. Just like what she did with the charming libertines/rakes she includes in her novels ( see my previous post) :  she has to condemn theatricals and their dangerous effect on young people , it is in accordance to the morals and the social conventions of the time, of his readers, family and friends. But this does not mean she is not fascinated by them.
Posted by Maria Grazia at 16:09