SCENTS AND SENSIBILITY - A NEW AUSTEN MODERNIZATION COMING OUT SOON 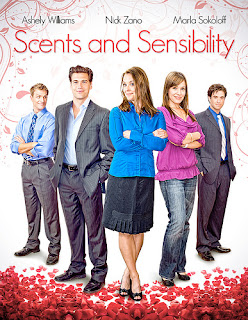 After From Prada to Nada, released in January 2011, another Austen modernization is going to be soon released in America theatres, Scents and Sensibility.  The first one is already available on DVD. But this is how I probably will see the latter, too! I'll have to buy DVDs to see both films loosely inspired to Austen's Sense and Sensibility on occasion of its bicentenary.  These movies rarely reach Italian cinemas.
Meanwhile, let's enjoy the official trailer which announces the release of
Scents and Sensibility
COMING SOON!
Posted by Maria Grazia at 10:29

Wow! I hadn't heard about this one. It looks pretty good! I usually don't like modern adaptations but I'll have to check this one out. Ashley Williams is cute, I've seen her in a few TV movies. Thanks for posting the trailer!