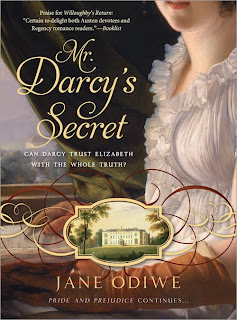 Pride and Prejudice continues in the elegant style that is the distinguishing brand of  Jane Odiwe's sequels. After Willoughby's Return   ,  her skill at creating thrilling emotions, her thorough research and her passion for the Regency Era , are successfully dedicated to make the  inhabitants of Pemberley re-live on the beautifully written pages of Mr Darcy's Secret. You'll meet the newly and happily married couple, Darcy and Lizzy,  as well as their relatives , friends  and antagonists.
A successful marriage haunted by the untold,  a dark secret to be unveiled, a denied love story,  are among the main elements in the plot , but  you also find so many typical Austensian features like balls, family gatherings, trips and journeys, marriages of convenience and for love, propriety and good manners, friendship and sisterly love, elopments and  engagements, that you really start thinking you are reading Austen.
A real page-turner you can't miss, if you love Austen sequels, romances and witty prose in historical fiction.


The story opens at Longbourn with Mr & Mrs Bennets enjoying the correspondence  from their daughters' successful marriages, both Elizabeth and Jane are married now. Successfully married to very rich gentlemen! Well, Lydia is married too, to George Wickham and living in Newcastle. But she and her dashing officer husband won't be with them at the Christmas gathering at Pemberley. Mrs Bennet is very excited: Pemberley!
At Pemberley, Elizabeth is anxious but willing to undertake her new tasks as lady of the house. At their arrival, both her and her admired Mr Darcy,  are welcome with enthusiasm and cheer by all the inhabitants of the village. But their bliss  starts immediately being haunted:


"I know very little of my husband...I am certain that a man does not reach the age of twenty-nine without experiencing an affection or infatuation or maybe something more" (p. 114)

To induce suspects and torment in Elizabeth's thoughts,  rumors and gossip,  as well as love letters she finds hidden in a book kept on the shelves of Pemberley library. What is Darcy hiding from her? Why doesn't he trust her with the whole truth?
To increase her disappointment, Darcy's behaviour to Georgiana. He wants to choose  a proper husband for her, chosen among the best families in the neighbourhood, a husband who can grant both a title and patrimony, in order to protect his little sister from fortune-hunters. Georgiana is ready to obey her brother: her sense of guilt for past mistakes, her awe and deep love for him, make her accept her brother's choice of a husband. She is going to marry Mr Calladine, though she is in love with Tom Butler.
Lizzy tries to persuade her not to go on with her  resolution, since she could greatly regret it . Lizzy is  also really furious with Darcy for his considering Mr Butler , a drawing master and  an artist, an expert in landscape gardening, too low a catch for her sister. Furthermore, her disappointment is even greater when she hears Darcy repeat the same statements she had to bear hearing  from him when he first proposed to her. He hasn't changed,  then. And what he thinks of Mr Butler might obviously be what he still thinks of her!
Tom and Georgiana will experience the pains of denied love because of Darcy and Elizabeth will not be able to do much more than witness her young sister-in-law's unhappiness and support her with her affection.
Each time the two young lovers - because, of course, Tom Butler loves Georgiana too - meet each other by chance, the love tension and their longing is palpable:

"Georgiana felt tears spill over her hot cheeks before she was aware of Tom's cool fingers under her chin raising her head until her eyes were in line with his own. He held her face in his hands, his fingers caressing her soft skin as he brushed away her tears. His blue eyes stared into the pools of the grey eyes that looked up at him, the connection broken for a moment as he lowered his gaze to rest upon her lips. He was going to kiss her, she felt sure. More than anything, she wanted him to kiss her, to show him how much she loved him. Georgiana stared back at his mouth and closed her eyes in anticipation. Tom looked down at her skin, warm and glowing like a soft peach in the sunlight, her wet lashes curling against her cheek, her lips pink and inviting. He thought how beautiful Georgiana looked, but Tom knew he would be very wrong to take advantage of such willing submission. The temptation to kiss her was very strong and he had to fight every inclination to touch the lips that looked so bewitching. Georgiana opened her eyes to see a look of defeat in his eyes. How she longed to tell him that he could steal a kiss, that she wished he could take her in his arms, however wrong she knew that would be." (p. 213)

But it is an Austen sequel, isn't it? You must be patient and you will be rewarded in the end. You 'll  get your very happy ending and rejoice in Tom and Georgiana's joy.

All through the novel, Elizabeth will have to cope with Lady Catherine and her despise, Caroline Bingley and her envy, shadows from her husband's past, unexpected and painful arguments with him on several occasions and several obstacles on their path to happiness. But you know her strength, vivacity, resourcefulness and courage.
Here's an example of Lady Catherine's bitterness to her new niece-in-law:


"Does your husband know that you are running around the countryside dressed asa gypsy riding in a donkey cart, Miss Bennet? ... What on earth can you mean by disgracing Mr Darcyin such a fashion? Have you no idea of decorum, are you insensible to the honours bestowed on you by him, that fool of a nephew of mine who has singled you out above all other women to bear his name?" (p. 175)

How do you think Lizzy will react? No fear, you're right. She will  face her stern newly - acquired aunt as you can expect, as an impeccable Austen heroine would do.

What else can you expect from this new Pride and Prejudice sequel by Jane Odiwe? Well-built tension, surprises, tender emotions until the final gratifying unveiling of the "secret" and the protagonists' well-deserved happiness.

Discover more about Jane Odiwe, her novels and illustrations on her Blog ,  Site and on Twitter
You can buy your copy of Mr Darcy's Secret at
at Amazon.com
at bookdepository .com
at Barnes and Noble
Posted by Maria Grazia at 17:04

Email ThisBlogThis!Share to TwitterShare to FacebookShare to Pinterest
Labels: Austen - based fiction