SOMEBODY TO LOVE: JANE AUSTEN ACCORDING TO ... MY KIDS 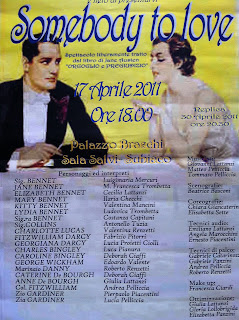 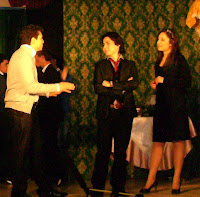 Well, it is a proud old teacher who has always thought that to convey her love for Jane Austen to her students was a very hard task writing here tonight.  It seems my impression was wrong. Some of them seem to love Jane Austen at least as much as I do and they have conveyed their love  to me tonight. The cast of this home-made musical was mostly consisting of my students and ex-students, as well as some girls who were  in my Jane Austen reading club at the public library last year ( I led and moderated over an  Austen reading group of ladies and girls, do you remember?) 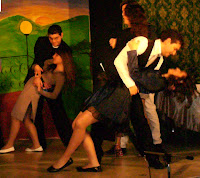 All these young people decided to stage Pride and Prejudice, setting the story in the 1950s and giving to their pièce the title of "Somebody to Love" .
They wrote the script, selected the music and created the coreographies, chose the props and drew the scenery, designed the costumes and  set the lights, rehearsed for months, under the direction of Costanza, a brilliant, sparkling, exhilarating Mrs Bennet. Actually one of the best I've seen so far! 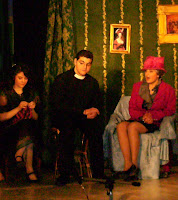 Mr Bennet (Luigi Maria) was impeccable in his witty but detached management of the 5 Bennet girls and, especially, his volcanic Mrs Bennet. I loved all the girls: Maria Francesca as Jane, Cecilia as Lizzy, Ludovica as Lydia, Valentina as Kitty and Ilaria as Mary.
And now the heroes! Darcy. Fabrizio. Perfect. His aristocratic features, his contained refined manners were natural. 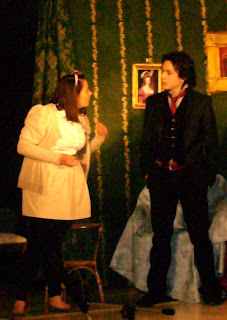 He practically didn't have to pretend. He's always been like that as far as I can remember. So well mannered that you wondered: " is this boy really a teenager of our time" ? Knowing him a bit, I guess his embarassment in the proposal scene, his struggle against those feelings considered as flaws,  were quite ... natural, too. Fabrizio. Perfect choice as Mr Darcy.
Then, Luca, Bingley. Another perfect choice. His courtship to Jane (Maria Francesca) was so passionate and direct and convincing. "There must be something between those two, I've been thinking all the time" .
But, Antonello as Mr Collins, was the greatest surprise to me. Always silent and shy and introverted, he shone as a true comedian, self-confident in his printed blissed smile each time he mentioned or saw Lady Catherine. And how well he sang! Awesome voice and good interpretation. Well done, Antonello. 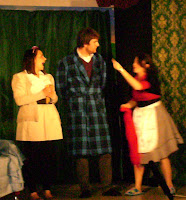 Wikham (Edoardo) was handsome and had such a sweet face, I can just believe how easy it must have been to him to conquer all those hearts: Georgiana, Lydia, Lizzy.
Deborah was really astonishing in the double role of the two most disagreeable women in the story: Caroline Bingley and Lady Catherine. Very convincing.
Last but not least, the band who played the music live: bravo boys !
(Matteo, Giovanni and Tommaso).
Congratulations to all and each one . The entire cast (even those with just a few lines) deserve my most sincere appreciation. Thanks , girls , for your invitation. You've made me very proud and very happy.
(P.S Sorry for the bad quality of my pics!)
Posted by Maria Grazia at 00:42

Sounds good and very interesting. Now, you've woken my curiosity and I'd like to see it too. Have they shot a video of it? Ciao. A.

Oh Maria, I wish I could have seen this! And what a wonderful tribute to their teacher :)

I am so happy for you MG! How wonderful to see your students perform something so dear to your heart and know that you were the inspiration!
I love high school drama productions. But this was a musical too! How very ambitious!
I wonder if they could make some money by selling the script?!
What a heartwarming post! :)

@lunarossa
It was good because of the kids' enthusiasm and touching effort. I think some of the parents there shot a video, but I don't know if I can get hold of any of it. Let's see what I can do...Baci.
@Juliet Archer
It was a tribute to Austen and a show for charity. These young people were a pleasant, enormous surprise in my quite unsatisfying recent teaching months. Thanks for dropping by and commenting!

@phylly
It was hold in a big hall near the cathedral and these group of kids are very active in the parish. It was a show for charity, not at all connected with school or my lessons. Many of the girls are or were in my classes (or reading club) and they invited me because they know how much I love Austen. That's all. I don't think I inspired them. The real muse in all that is Costanza: she directed them, was a terrific Mrs Bennet and is an enthusiastic Janeite.
But it was heartwarming and a great joy to me . There are still few very talented and generous young people out there. I had started doubting.
Thanks for your comment, Phylly!

THis is fantastic Maria! I have a video from my students too!

It is an exiting, grating and happy 'Mrs Bennet'writing here! Sorry for my imperfect english, but it is dutiful for me to answer to the beautiful words that you write for us Maria Grazia, and write here in italian...is a sort of affront, so...I try to do the best I can do!!!Thank tou, thank you, thank you!!! You have to know how much your notes about our pièce made us happy and proud, not only for the idea that we have done a well-made performance, but for the think to have realize an adaptation faithful! You know how we love this book and how many time we read and read and read its pages...it was this love that gave us the idea to realize this performance, and the conviction that this story could be loved by the boy of our group too! I confess to you that, during the months in which we have rehearsed, we sayd many time'...Oh God...when Maria Grazia will see this, she'll run out scraeming from the theatre!!!' But, fortunatly, this wasn't happen!!! I am very happy that the choise of the characters was correct: we are persuated that Fabrizio doesn't seems Darcy...he IS Darcy!!!
So, the whole theatral group of Azione Cattolica thank you! Of course, we are prepearing a copy of our video for you!!! An embrace,
Mrs Bennet...emmh, Costanza!

ps:we should be happy to invite the girls who were with us in Jane Austen reading club, but we haven't contact of them!How we can do? Thanks.

@Costanza
Only well-deserved words and heartfelt, Costanza. I really appreciated what you did!
As for the girls from Rome coming to see the musical... They really wanted to but none of them dare drive at night and your next performance is at 8 p.m. So, I think it'll be difficult to have them here. They'll read your invitation here, I'm sure. Let's see whether and what they answer!

@Costanza: first of all let me congratulate you and the whole cast on this successful performance: bravi! If Maria Grazia has written such an enthusiastic review, the show must have been really good: she's quite a stern critic, as you might already know ;-D
I'm so sorry I wasn't there for the première, and I won't be able to make it next week either, because of the distance and the scheduled time of the show.
Any chance of further repeats? in that case, I hope to be able to watch the video, at least.
Keep up the good work!
Ciao,
V (+ C + A + S = The Roman Girls)