A NEW ITALIAN EDITION OF PERSUASION - INTRODUCTION BY ROBERTO BERTINETTI 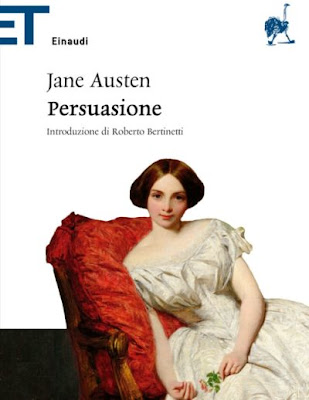 Published posthumously in1818, Persuasion is  the last novel written by Jane Austen. It has been newly published by Einaudi here in Italy, translated by Maria Luisa Agosti ( Persuasione, 272 pages, 11 euros) with an introduction  of Roberto Bertinetti, Professor of English Literature at the University of Trieste,  who also writes for “Il Messaggero”, an Italian newspaper.  This article says that this  new edition offers a new reading approach to the work of the artist considered by Virginia Woolf “the most perfect among women writers”.
Through the love story between aristocratic Anne Elliot and Captain Frederick Wentworth, Austen conveys a remarkable portrayal of the British society of the early 19th century as well as - Professor Bertinetti states -  “a proud demanding of women’s rights”. According to Professor Bertinetti, Jane Austen is maybe a conservative in her political views but “a subversive in literature”, due to her determination in her claiming  - through Anne Elliot’s voice – the independence of women inside a frame of  brilliant comedy.
As a teenager already, she recognized  a different narrative mode  for every chosen theme: she took the shell of the 18th century sentimental novel and filled it in with new content. She created and designed smart characters, girls or young women like her with thoughts and plans, and here we have heroines that struggle to impose a silent revolution, in their own home environment, who were destined to change the relationship between the sexes in early 19th century England.
Jane Austen was such a highly independent spirit that she didn’t bend even to the flattering proposition of Rev. James Stanier Clarke, the Prince Regent’s librarian. This is her well-known answer to him:

MY DEAR SIR, — I am honoured by the Prince’s thanks and very much obliged to yourself for the kind manner in which you mention the work. I have also to acknowledge a former letter forwarded to me from Hans Place. I assure you I felt very grateful for the friendly tenor of it, and hope my silence will have been considered, as it was truly meant, to proceed only from an unwillingness to tax your time with idle thanks. Under every interesting circumstance which your own talents and literary labours have placed you in, or the favour of the Regent bestowed, you have my best wishes. Your recent appointments I hope are a step to something still better. In my opinion, the service of a court can hardly be too well paid, for immense must be the sacrifice of time and feeling required by it.You are very kind in your hints as to the sort of composition which might recommend me at present, and I am fully sensible that an historical romance, founded on the House of Saxe-Cobourg, might be much more to the purpose of profit or popularity than such pictures of domestic life in country villages as I deal in.

But I could no more write a romance than an epic poem. I could not sit seriously down to write a serious romance under any other motive than to save my life; and if it were indispensable for me to keep it up and never relax into laughing at myself or at other people, I am sure I should be hung before I had finished the first chapter. No, I must keep to my own style and go on in my own way; and though I may never succeed again in that, I am convinced that I should totally fail in any other.I remain, my dear Sir, Your very much obliged, and sincere friend,

Chawton, near Alton, April 1, 1816.
Irony is the key to this answer and irony is what makes Austen’s work unique. She’s a master of irony. She wrote stories – as Canadian Northrop Frye stated – that hope for the coming of  a “desirable” England, where young women in search for a husband were allowed the freedom of choice as well as the possibility to raise their social rank , without the restraint of obsolete and strict rules of decorum .
The models of behaviour able to favour the coming of that “desirable” society are Elizabeth Bennet, Emma Woodhouse and Anne Elliot. They are determined women who have learnt from their mistakes – often due to their inexperience. It is clear – says Professor Bertinetti – that Jane Austen meant them as positive models for her readers. Persuasion, her last novel, can be a sum of her subversive ideas – closes Professor Bertinetti. Finally,  he agrees with those critics who considered Austen’s work mainly subversive and ironic.
This post is  mostly a translation of an article from The Messaggero , "Jane Austen l'ironica sovversiva" (June 28, 2011)
Posted by Maria Grazia at 10:49

Email ThisBlogThis!Share to TwitterShare to FacebookShare to Pinterest
Labels: Persuasion

Thank you Maria Grazia, I missed this new release. Tomorrow I'll go and get it, I like Einaudi editions very much. A good chance to plan another re-reading of Persuasion! Un caro saluto, Claudia

Thank you Maria. I enjoyed reading Jane's letter to Rev. James Stanier Clarke.
Persuasion is my all-time favorite Jane Austen novel. It's a beautiful love story. I have recently read Susan Kaye's novel Captain Frederick Wentworth, None But You. I enjoyed it immensely and I am looking forward to reading Book 2, For You Alone.

It seems italian editors are full throttle with first and new editions of romantic authors. North and South, now Persuasion,... Good thing. Hope they get to publish some of the books you review in spanish. If not, thank God for having at least English as a second language. Next french or Italian LOL
Hope you are having great holidays.