READY TO LEAVE FOR AUSTENLAND? FROM THE BOOK TO THE MOVIE 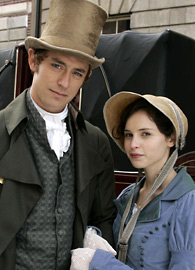 Here's a synopsis of the book 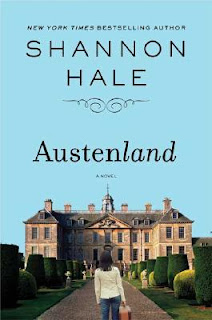 In 32-year-old singleton Jane Hayes’s mind, no man in the world can measure up to Fitzwilliam Darcy—specifically the Fitzwilliam played by Colin Firth in the BBC adaptation of Pride and Prejudice. Jane is forced to confront her Austen obsession when her wealthy great-aunt Carolyn dies and leaves her an all-expenses-paid vacation to Pembrook Park, a British resort where guests live like the characters in Jane’s beloved Austen novels. Jane sees the trip as an opportunity for one last indulgence of her obsession before she puts it “all behind her—Austen, men, fantasies, period,” but the lines between reality and fiction become pleasantly blurred as Jane acclimates to the world of Spencer jackets and stringent etiquette rules, and finds herself torn between the Darcyesque Mr. Nobley and a forbidden tryst with Pembrook Park’s gardener (from Amazon reviews) 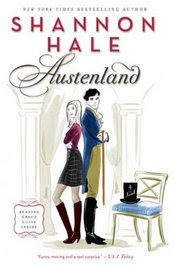 [Check this book at  bookdepository or Amazon]
Posted by Maria Grazia at 08:48

Oh, youve just made my day. Screen-Adaptation of Austeland? I really love the book and I often wonder if this moment would come someday.
I think Austeland it wll be my fav resort for holidays in case an ancient aunt I didnt know would like to reward me with the present of presents because Im so into Darcy LOL.
Waiting for news already.
Just hoping Stephanie Meyer involving doesnt mean one of the guest at Austenland will become a vampire hunter or something like that. LOL

I love the casting for the film, now if someone would smart enough to create an actual Austenland, that would be great. I might also like to see a film adaptation of The Man Who Loved Jane Austen. With its blend of present day Virginia and Austen's Regency period, it's another of my favorites.

Good news! I love Austenland, but I'm a bit worried about the presence of Stephenie Meyer for the same reasons Laura already stated. >_< :P

Here's hoping it's good. The cast sound good as does the director. Any idea who is writing the screenplay? That could be very important!

Does anyone else find the fact that Bret McKenzie from Flight of the Conchords is involved hilarious?

Wow! What a pleasant surprise! Casting looks great, can't wait to learn more about it! I hope this is the start of many Austen-Inspired novels being turned into movies!

Meyer is a big JA fan - she says that the first book of the series was inspired by P&P (I can see Edward being inspired by Darcy, in a way,) and the name Edward was used because of Edward Ferrars (and Mr. Rochester) and that she can't go a year without re-reading JA's books. Sounds like she might do a great job with it! I hope so anyway.

Co-written by Shannon Hale herself and Jared Hess, husband of the director and Napoleon Dynamite director too, according to Hollywood Reporter Clickie

This is exciting! I can't wait to see it. She has some great movies (from her books) already.

I've not read this book yet (but there are so many to read argh!!!), but how I would love to spend a bit of time in Austenland. Just a bit because, although I love Regency and 19th century, I love hygiene and medical progress more!!! I won't miss the movie, too!!!

I've just finished Austenland and simply loved it!!!! Oh the ending: so romantic, so truly romantic. Now that I know what Austenland is, maybe I don't want to go to this Austenland, but to my idea of Austenland: an original Regency manor with rules and etiquette for real guests!!! No paid actors, please. It is so depressing!

I have read this book and really liked it! I agree with Maribea about the paid actors, reality and fiction gets too confusing! A movie sounds great! Can't wait to see it!

I usually do not comment on posts but this article stands out from others. I could learn several new things from it. It is great when you are able to gain an understanding on topics that were unknown. Thanks for that.