PERSUADE ME BY JULIET ARCHER - MY REVIEW 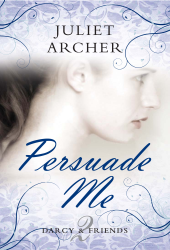 When do you let your heart rule your head?
Persuasion. When you like a story so much you never have enough of it.    I haven’t read much based on Persuasion actually, this is the first modern re-telling of my favourite Austen. It was a real page turner despite my already knowing what was next. It was intriguing to see how Juliet Archer made those familiar events take place in such a different context, for example. She often surprised me and her smooth,  involving narration kept me interested all the time.
This  is the second book in the series “Darcy & Friends”,  which Juliet Archer started with her brilliant and successful  ,  “The Importance of Being Emma”.
“Persuade Me” is a nowadays re-telling of Anna (Anne) Elliot’s regrets and Rick (Frederick) Wentworth’s constant but resentful  love for her.  Anna (18) and Rick (22) meet in France during a summer holiday while she was baby-sitting and he teaching sailing before both go  on with their careers. She was going to move to Oxford to graduate and he was moving to Australia for his PhD. It’s love at first sight, an unforgettable experience, an overwhelming passion which has to face reality as soon as Anna’s father, Sir Elliot 8th Baronet of Kellynch,  and her godmother, Minty aka Lady Russell , find that out. Anna is persuaded not  follow Rick to Australia as he asked.  She must go to Oxford and get her degree, and especially , she can’t marry a nobody like him. Anna let them persuade her, that's her fault. She feels she can’t be so impulsive, she risks being caught in an unhappy choice like her mother.
Ten years after Anna is a University Professor in Russian Literature in Bath and Rick is a worldwide famous expert in Marine Biology who has just  published a book, soon become a best-selling : “Sex in the Sea” Rick’s gorgeous looks have turned him into an object of desire for many a woman,  but he has just broken up a long lasting relationship with a beautiful supermodel, Shelley McCourt. Well, she dumped him down for a millionaire, actually.  But now that  Rick is going back to England to launch his book there, lots of memories come back to his mind. He is still hurt for being left that way ten years earlier: he will never forget and never forgive. His pride is doubly hurt now that also Shelley  left him.
Memories intrude and both have to face each other's past and present feelings. Anna has to deal with another man from her past, while Rick is made the focus of unwanted attention by his celebrity status. Things will not be easy for them and what makes it even more complicated is that Anna's image-obsessed family is still ready to interfere ...
Persuade Me by Juliet Archer will be released
on 15th September by Choc Lit Limited
N.B. Juliet Archer will be my guest for a friendly chat about Jane Austen and Persuade Me on 15th September. Stay tuned! You'll get your chance to win this beautiful modern romance inspired to Persuasion.
Posted by Maria Grazia at 20:57

Persuasion is also my favorire Austen. Since you gave "Persuade Me" a favorable review I am tempted to give it a try. Looking forward to your guest chat with Juliet.

The only Persuasion spin-off that I have read is by Susan Kaye, Frederick Wentworth, Captain. Book 1, None but you. I really enjoyed reading it.

Great review. I'm tempted to get this book straightaway.

I read Jane Austen in Scarsdale, a Persuasion modern retelling so you should give it a try. There aren't many sequels or spin-offs for Persuasion compared to Pride and Prejudice.

I love Persuasion, so I'm really looking forward to getting my hands on a copy of this book!


Tutu Helper is the one of the best ios,android App store to get the tons of free app and game. Here the latest version of TutuApp of free.
Tutu Helper Apk
Tutu App
TutuApp Apk iOS