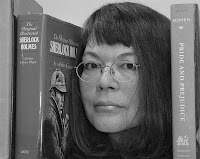 Jennifer Petkus divides her time writing Jane Austen-themed mysteries, creating websites for the dead, woodworking, aikido and building model starships. She has been a police reporter, web designer and programmer but now survives as a kept woman. She is also the author of Good Cop, Dead Cop.

Discovering Jane Austen relatively late in life made me that sort of frantic Janeite who makes up for lost time. In short order I had read the novels, much of the Juvenilia, a biography or two, several continuations and watched many adaptations, leaving me groggy (Lost in Austen in one sitting), confused (Did Darcy cripple Wickham; were zombies involved?) and happy.

And desperate to become a part of the world of Jane Austen as more than just a reader. But I know my limits and didn’t dare dream to copy Austen’s style and wit and most importantly did not have her confidence that the simple love of two people would be sufficient plot for an entire novel.

So I whined to my husband: if only I could find a way to combine Sherlock Holmes-style short stories with Jane Austen, then perhaps I might be able to find my métier and a framework around which to hang a tale (I didn’t say actually métier and hang a tale; that would be pretentious). To which he replied: “You could call it My Particular Friend.”

He’s done this before: given me a brilliant idea that turns my world upside down, unaware of the havoc he’s caused. Because I suddenly knew how to combine my newest particular friend, Jane Austen, with two of my oldest and best friends — those particular creations of Sir Arthur Conan Doyle — Sherlock Holmes and John H. Watson

Very quickly I came up with the not very clever names of Charlotte House and Jane Woodsen; and I confess at first Charlotte was simply Holmes in drag and Jane Woodsen the compendium of all those Austen heroines of discernment and understanding.

But soon an Austen character not known for her discernment and understanding also became a role model for Charlotte. I began to see in Charlotte a reflection of Emma. I thought, what would Emma be like had she read all those books? What if she had improved her powers of observation? And what if she had suffered a tragedy that made her no dilettante but a professional in matters of the heart?

I gave Charlotte many of Emma’s advantages: wealth, beauty and a former governess who owed her happiness to Charlotte’s interference. From Holmes, she acquired a keen mind, a fondness for trifles, a detestation of boredom (shared with Emma) and a sense of justice.

Jane Woodsen, however, owed more to Charles Dickens and the Brontës: a father who’d killed himself rather than face debtor’s prison; a determination to take risks; and the death sentence of being a governess.

Fortunately another particular friend surfaced to relieve the grimness of my gruel: P.G. Wodehouse. Since discovering Austen, I was often struck by the parallels, but where Austen characters sought marriage, Wodehouse characters often sought to escape it. Wodehouse added a much-needed dash of hot sauce, like one of Jeeves’ pick-me-ups.

In the end, My Particular Friend became a mishmash of styles: Austen, Doyle, Wodehouse, Dickens and even the BBC’s Blackadder. Like a medieval pottage, you don’t want to look too closely at the ingredients, but I hope they combined to form something edible … uh … readable.
Jennifer Petkus
The Book

Miss Charlotte House will not admit impediments to marriage, not even when those impediments include scandal, blackmail and even a duel to the death. With the help of her particular friend Miss Jane Woodsen, she deduces all that happens in Bath—both good and ill—and together they ensure that true love’s course runs smooth, even though both friends have suffered tragedies that prevent their own happiness. These six affairs, set in Bath, England, during the Napoleonic War, are inspired by the creations of both Sir Arthur Conan Doyle and Jane Austen.

There are 2 e-books and 1 paperback edition for you. The giveaway is open internationally for all the copies! Leave your comment choosing the format you prefer and don't forget to add your e-mail address, please! This giveaway contest will end on April 23rd.

ooh, sounds wonderful! I really enjoy Doyle and Dickens and think this mashup could be great fun! please enter me in your giveaway!

Please, GranJan, could you add your e-mail address?

Thank you very, very much for this opportunity. I feel like I'm walking on air thanks to your kindness.

You're welcome, Jennifer! It's always a pleasure to meet and introduce an Austen-inspired author to the friends of My Jane Austen Book Club. Thanks to you for being my guest :D

I am very new of this blog, but am a very old Austen, Dickens and Balckadder admirer, and I do enjoy a good thriller. So .. can I enter the competition? The email address is vava_darcy@yahoo.it
Thanks for the opportunity! Silvana


I’m a big fan of Sherlock Holmes and Dr. John Watson so the thought of using them as a jumping off point for an Austenesque style mystery is very intriguing – bring it on!
If I’m lucky enough to win, I’d prefer the paperback copy but wouldn’t turn down an e-book. You can find me at : elaine489(at)gmail(dot)com
Thanks for the opportunity!
Cheers!

I have to warn that the Blackadder reference is subtle and may only be caught by true fans.

Sherlock Holmes and Jane Austen, what a wonderful combination.
I´d love to read the paperback, but since I writing from Europe, I´ll go with the kindle-copy too, if I would be the lucky winner.

It is really interesting I am sure. I am looking forward to reading it.

Sounds very good! I would love either e copy or print. Thanks!

liking this imaginative writing!
all authors i value & anticipate the creative outcome..
TY for the offer :)
faithhopecherrytea@*gmail.*com

Very intriguing! I love the combination! Thank you for the giveaway. I would be thrilled to win an ebook or a pb!!
cherringtonmb at sbcglobal dot net

please enter me for a print copy!!

What a wonderful idea, combining characters from Jane Austen and Doyle's works. I'm interested to know what the six affairs are so do count me in for the giveaway.

The six affairs are:

Great idea!! And loving the cover too! Please enter me in the giveaway for sure!

Thanks BrendaNZ for the comment about the cover. It’s Prior Park in Bath and the home of Ralph Allen, mayor and postmaster of Bath. I took hundreds of pictures of the Palladian Bridge and lake and in at least half of them a goose kept mooning me. You would not think a goose could keep its head under water that long.

And unfortunately the water level in the larger part of the lake was quite low and covered in goose feathers. And it was raining. Thank goodness for PhotoShop.

Very interesting read! Can't wait to get my hands on it. I would love the print version if I win. raemar90@msn.com

Sounds great! Sweet and nice. No vampires for once! I can not have anymore bites and drinking blood after sunset! Thanks for your writing. It sounds like the quintessence of what the best of the British literature produced in the past.

On Take Free Bitcoin you can claim FREE bitcoins. Up to 22 satoshis every 5 minutes.