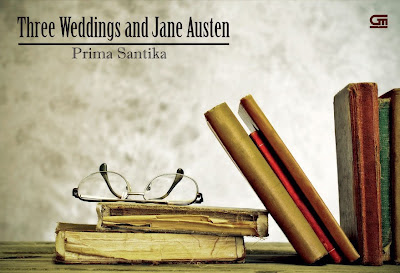 - An Indonesian Novel
by PRIMA SANTIKA -

“Nothing can produce a better feeling for a mother, than to see her daughter
being married to a good man she loves.”

“It is a truth universally acknowledged, that a single man in possession
of a good fortune, must be in want of a Wife.”

But of course, in my book the sentence is written in Indonesian language, not in English. Therefore, one can not merely put the original Indonesian sentence into Google Translate the same effect while reading it in English. It must be properly translated. And judging from the tagline, the readers will soon be aware that the book contains a story of mother-daughter relationship and the weddings at the end. Then, so be it!

When I started to write this book in early 2008, in order to relate the most of Jane Austen’s point of view with Indonesian way of life, I had no other option but to put it into a good-family perspective. I could see a close relation in terms of manners and how to regard love and marriage in an ordinary, modern, well-managed, good-moral Indonesian family, with the ones in Jane Austen time. Combining both similar values in one storyline seemed to be a wonderful idea for me to explore at that time. My book is finally done and published in 12 January 2012 by Gramedia, one of the biggest, oldest, most respectable publishers in Indonesia. 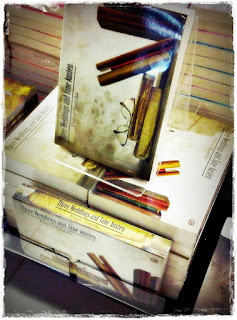 The book is in 464 pages, with the dimension of 13.5x20 cm. It contains one Prologue, two Parts, nine Chapters, and one Epilog. Some of the Chapters contain 2 to 4 Sub-Chapters. The story is told always by first person. There are four main characters: the mother called Ibu Sri [Ibu=Mrs.], and her three daughters named Emma, Meri and Lisa. Each character gets her own Chapter or Sub-Chapter in telling her own stories. In helping the readers to memorize in which character they are currently reading, the book provides header in every page informing the Chapter’s title and the character's name.

Telling a story in first person while some characters sometimes fall into one same scene, produces some retelling here and there. However, not all scenes need to be retold, it’s only for the important ones where the particular scene takes different impacts on each character. By doing this, we can explore into deeper feelings and thoughts by the characters in every meaningful scene. For me personally, as a starting writer, I find this situation very interesting and challenging at the same time. And the fact that the big publisher got it and then put it into a mass production, gave me an utmost relief and a wishful thinking, that people might enjoy this idea as well.

Ibu Sri is a real fan of Jane Austen! She has all the six novels and read it over and over again since high school. Her high school period was in London, and before it’s over she has to move back to Jakarta where she lives ever since. Her husband is a doctor in a particular hospital. This father character doesn’t appear at all in this novel. He still lives with Ibu Sri and their three daughters, but his presence is never told. Both the Prolog and Epilog contains a letter written by Ibu Sri to her husband when she – at last – has a chance of visiting London again with their daughters after they’re all married. In those letters she tells him how much she loves and misses him. 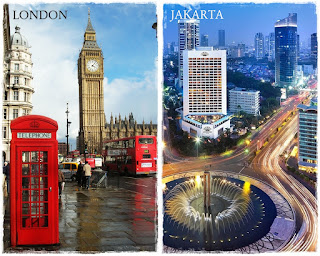 The Prologue tells a brief summary about Jane Austen and her books. In her letter to her husband, she’s reminiscing about how important those books are. She even names her daughters after the characters in Jane Austen books. Emma from Emma Woodhouse in Emma, Meri from Marianne Dashwood in Sense and Sensibility, and Lisa from Elizabeth Bennet in Pride and Prejudice. Although they’re named after certain characters, their stories are not necessarily similar to the related characters.

Ibu Sri uses Jane Austen books to give advises to her daughters on how to deal with love, since their high school time until present days. It’s like a holy book of romance for her, and she makes sure that her daughters will inherit all the wisdoms Jane Austen ever told in her books.

“My dear Husband, I don’t know whether you felt it or not, but the periods of searching for love and finding a husband were a very fragile phase for our daughters. And I had promised myself never to miss those moments. At that point, I felt like being obligated to understand and to give guidance to our daughters as they’re growing up. Turned out I needed guidance myself. Something to look up to, something modern. Religion was the most important value, and it’s mandatory for us to put it into their education. Tradition, norm and moral in living within the family and as part of society in Indonesia were also implemented in our daily lives. But I needed something more. There were some values – applicable in nature and related to romance –  in a girl’s life as she’s becoming a grown up, that needed a comprehensive guidance to conduct. Fortunately, I found it not very far from my own all-time amusement. The Jane Austen novels.”

And since the Prologue has revealed the ending of the story, that all the daughters are finally married, the heartbeat of this novel depends mainly on the journeys. And the journeys in this novel are defined as wrong turns, regrets, lessons learned, and letting go. As the writer I just hope that these kinds of journeys will keep the readers turning pages until the very end of the book. And in the last chapter – told by Ibu Sri – there’s a soft surprise on how the three weddings can be made possible. 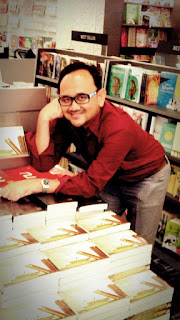 Hi, everyone! I’m Prima Santika from Indonesia. I live in Jakarta, the capital – as well as the biggest cosmopolitan – city in Indonesia. I studied Economics, and I’m currently working in a telco company. I was born in 1974, a husband to a beautiful wife, and a father of a handsome 4 years old son. I have just published my first book, entitled THREE WEDDINGS AND JANE AUSTEN. It’s a novel in Indonesian language,

I hope this writing of mine can give you a glimpse of what I have done to introduce Jane Austen to Indonesian audience. And for this opportunity, I should thank Maria Grazia, the owner of this blog, who appreciates my book although she hasn’t read it. I believe she only reads my guest post in the blog of MVBClub. And if only this book were translated in English, I would be more than happy to provide giveaway books for this blog’s readers.

To discover more about Prima Santika,  his love for Jane Austen, his fascinating country, his first novel , Bali and the “Eat Pray Love” movie,  read   Part II of his post coming soon on My Jane Austen Book Club.

your book sounds delightful. I am fascinated by Indian culture and watch many native films (not just Bollywood - which I do enjoy) and will look forward to the time when your book is translated!

This book is amazing! :)

Dear GranJan, thank you for your support! Maybe if there are many like you who want my book translated, then the publisher would do it. Keep my fingers crossed! :-)

About the culture, I agree with you that Indian culture is fascinating. I watch many Bollywood movies myself. But INDONESIAN culture is definitely not any less riveting. Indonesia is very rich with lots of different ethnics, beautiful scenery, delicious cuisines, and not to mention bewitching traditional dances and ceremonies. In Part Two of this article, I will introduce you to BATIK, a fabulous decorated fabric that people here use as daily clothes as well as ceremonial dresses. UNESCO even granted it as the world's Intangible Cultural Heritage from Indonesia. In the story of my book, Emma, the eldest daughter, owns a Batik Boutique.

In EAT PRAY LOVE, Julia Roberts goes half the world to find peace in her life. She's in ITALIA for eating, in INDIA for praying, and in INDONESIA for loving. And while Indonesia is a vast archipelago country, BALI is definitely one of the most beautiful islands with the bluest beaches and the greenest valley. In my story, the other daughters, Meri and Lisa, spend a weekend in Bali to escape from their heartbroken stories in Jakarta, but turns out meeting the men they loved in Bali. It's a wonderful bittersweet story that I really did enjoy writing, for the lovely feeling and the beautiful setting of it.

I do hope someday you can read my book, GranJan. :-)

Hi Juwita...thank you for your support! Glad that you like what you read. :-)