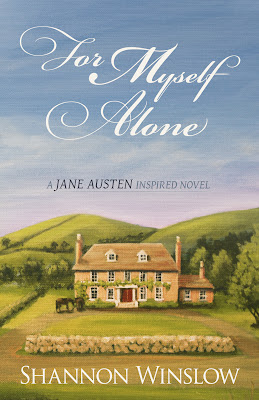 We met Shannon Winslow last year here at My Jane Austen Book Club on occasion of the release of her first Austen-inspired novel, The Darcys of Pemberley (HERE and HERE).
She's back with a new book and a new guest post for the readers of My Jane Austen Book Club. Enjoy Shannon's piece and get a chance to win her For Myself Alone. There are 2 e-book copies and 1 paperback for you! Three winners! The contest is open worldwide and ends on April 15th. Leave your comment , add your e-mail address and choose between the two formats, e-book or paperback.

The Darcys of Pemberley, a sequel to Jane Austen’s Pride and Prejudice, was my first novel, and it will always hold a special place in my heart. But for my second book, I set myself a new challenge: to write an entirely original story in the Jane Austen mode. I wondered what else she might have written had she lived. What direction would her creativity have carried her next?

Money (the want of it, more specifically) is a reoccurring theme in Jane Austen’s novels as it was in her own life – the well-bred young lady of small fortune, who had to marry or risk sinking into poverty (like Miss Bates). That’s how my heroine in For Myself Alone begins as well. But then I turn the tables by giving her a large, unexpected inheritance. Instead of solving all her problems, however, the money simply creates new ones, making Jo the target of fortune hunters and ultimately an unwilling party to a breach-of-promise suit.

Breach-of-promise suits are an intriguing phenomenon unique to the 18th and 19th centuries, and we think of them as being brought by a jilted woman against her former fiancé. And so it typically was in later years.  With a shorter “self life” and a more fragile reputation, a long engagement that came to nothing was far more likely to damage the intended bride’s future prospects than the groom’s. But as it turns out, early on in their history these suits were just as often filed by a jilted man, claiming emotional trauma or financial loss.

Going to court was perilous, though, often adding insult to injury. Tainted reputations could be further tarnished. And as for the monetary judgments, juries were notoriously unpredictable. They often ignored the evidence and the judge’s instructions to side with the barrister who put on the best show, awarding either nothing or an outrageous sum according to their collective whim. Defendants sometimes went to extreme lengths to avoid paying too, preferring imprisonment or even emigrating instead.

Breach-of-promise suits were a painfully messy business. But I showed no mercy; I threw my unsuspecting heroine right into the middle of one. How did she fare? Oh, no; I’ll never tell!


Set in nineteenth century Hampshire and , For Myself Alone is the tale of Josephine Walker, a bright, young woman whose quiet life is turned upside-down by an unexpected inheritance. With a tempting fortune of twenty thousand pounds, she’s suddenly the most popular girl in town. Yet Jo longs to be valued for who she is, not for her bank balance. She cannot respect the men who pursue her for her money, and the only

one she does admire is considered the property of her best friend. Now, even the motives of her new fiancé are suspect. Does he truly love her for herself alone? There’s one sure, but extreme, way to find out… if she has the courage to take it.
You'll find For Myself Alone at Barnes and Noble as a Nook  or at Amazon as a paperback or a Kindle book.

Shannon Winslow specializes in creating novels and short stories for fans of Jane Austen. The Darcys of Pemberley was her debut novel in 2011. For Myself Alone – a standalone, Austen-inspired story – now follows. She is currently working on the next installment of her Pride andPrejudice series, which is entitled Returnto Longbourn. Ms. Winslow lives with her husband in the log home they built in the countryside south of , where she writes and paints in her studio facing . For more information, visit www.shannonwinslow.com

All new characters... Hmmm... You may have to win me over with that one. I do like the premise, however.

Good luck with your new book!

Hi again!
Sorry, I would like to choose the format of a paperback.

Have a lovely weekend :)

Thank you for the interesting post and the giveaway! I'm quite intrigued by your book and I'd love to have the chance to read it. Though, as much as I'd love a paperback, living in Ukraine, I guess I must settle for an e-book :-))

So far 3 books and 3 entries; you're all winners! Thanks, Maria, for inviting me over for a visit.

Well, we still have got time till April 15th to gather other entries, Shannon! But Gayle, Joanne and Farida deserve our appreciation and special Happy Easter Wishes for being the first to comment and enter the giveaway contest :D
Thanks for being my guest again!

Firstly, I would like to wish a Happy Easter to Maria and everyone who is celebrating it.

Shannon, your book sounds intriguing. I have watched three series of Garrow's Law and can't wait to read the court scenes. And I wonder what will happen to Josephine.

Maria, I prefer a paperback copy.

Congratulations on the new book! Sounds interesting! Thank you for the giveaway. I would be thrilled to win an ebook or pb.
cherringtonmb at sbcglobal dot net

already on my WishList!!

thank you for the giveaway!!

I have this on my wish list also. It will be different to have a novel with new characters but something to look forward to. I love the premise of it and Jo sounds like a real character...smiles. I would love to get to know her. I think it is hard for people to suddenly have money just as it's a challenge for those who have a healthy means of living to go backwards. Great cover. Please enter me for the paperback. Or I can try and figure out how to do an ebook tho' I have no ereader yet.
schafsue at gmail dot com

Sounds very interesting. I definitly want to read it. Having read so much about the man being the one with the money (except for Emma, but then Kinightley isn´t quite to poor man :D ), it interests me how this story unfolds.
I have an ereader (a Kindle) so ebook is fine for me! :)

I love the fascinating concept of this book . I would love the opportunity to be entered to win a print copy of this book . My email is
keldaodesse@gmail.com
Thank you !

Hello everyone!
I'd love to win this book because I think it's beautiful and worth reading! I prefer a paperback copy
newyorkgirl82@gmail.com

This sounds like a wonderful story! I already have this lovely book on my wish list! Thank you for the giveaway!=)
I would love to win the paperback copy!
kellik115@yahoo.com

Sounds like you've been hard at work...and the book sounds like a winner! Thanks for writing about it, making me want to read it. And thanks for the giveaway! If I won the contest, I'd like an ebook.
staswicks@earthlink.net

Love Shannon Winslow's first book, would love to have a chance to win this book!
aka twitter handle: @lovesjaneausten
email address:
themanzifive@embarqmail.com

I've never heard of breach of promise suits in any writing like Jane Austen's. This is new to me! I would love to be in this contest.
My email address is: carlavespe@mail.com
My prefered choice of reading is paperback book.
Thank you

Great comments, everybody! Thank you for your interest and enthusiasm. Good luck on the contest.