Colette Saucier first book is a paranormal version of Pride and Prejudice in which Mr Darcy just happen to be a vampire: Pulse and Prejudice.  Do you want to discover more about  Colette’s  fondness for vampires? Read my 5 vampire questions and, especially, her answers to them. Finally,  try to win a signed paperback copy of her  novel, a new perfect Austen Halloween gift for you! Leave your comment and add your e-mail address to enter the giveaway contest. It is open internationally and will end on October 31st.

Welcome to My Jane Austen Book Club, Colette. Here's my first question for you: it seems the world has gone vampire crazy! (Meyer’s Twilight Saga and related films, TV series like True Blood and Vampire Diaries,  best – selling authors attempting their own vampire story) Have you got your own  interpretation of this phenomenon? Why is our world so attracted by this kind of supernatural characters? 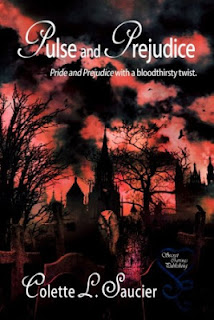 At least now most of the vampires have been relegated to novels, films, and television (although an active vampire subculture thrives today). Myths surrounding demons and revenants who drink human blood go back to anitiquity, but the craze really took off in Eastern Europe in the 17th and 18th centuries. Just earlier this year, “vampire” graves were discovered in Bulgaria – skeletons with rods driven through their chests to prevent them from rising from the dead and feasting on the living. The desecration of graves in this manner became such a problem in the 1700s that the Empress of Austria finally had the claims of vampires investigated and declared they did not exist. These vampires, of course, bore little resemblance to those found in popular culture today. They were monsters – demons, witches, or the evil dead risen from the grave – who terrorized villages.
Why have vampires, in some form or another, always been part of the human psyche? Probably due to a fear of our own mortality and the dark unknown – death. Even in Christianity, believers drink “blood” to gain eternal life.  The current brood of vampires have the added appeal of being sensual, dark, mysterious, and complicated. Often
they are romanticized as fighting the temptation of succumbing to their desires but ultimately finding the object of that desire, typically a woman, irresistable. Sound familiar? Those are some of the same qualities that have caused women to fall in love with the enigmatic Mr. Darcy for two hundred years even though we learn so little about him on the few pages he inhabits in Pride and Prejudice.

Whether vampires exist or not, their mythology is immortal.

Nobody can resist a handsome vampire.  Have you got a favourite one in books or on screen?
No question:  Gary Oldman in Bram Stoker’s Dracula.  His love for Elisabeta/Mina made him such a sympathetic character, I actually hoped he would win the girl instead of that insipid Jonathan Harker.

Is there anything  you don’t like, instead, in this vampire vogue?
I watched the first season of True Blood, but after that the other paranormal elements took over and it started getting too weird for me. I actually haven’t read much vampire fiction since Anne Rice finished her vampire series. I understand that the Twilight vampires sparkle?  I don’t think I would like that, but I mainly had no interest in reading about teen angst. I had enough of that raising three duaghters! 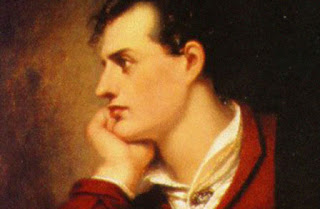 Now, let’s focus on mash-ups of vampires and  Jane Austen  characters/stories. This is actually strange. How could that happen? Jane’s world is so down-to-earth, all sense and balance…
I found the character of Mr. Darcy lent itself well to a vampire interpretation.  Lord Byron published “The Giaour,” with vampires rising from the grave to drink blood, the same year Miss Austen published Pride and Prejudice, and John Polidori wrote his novella “The Vampyre” only a few years later. Polidori based his Lord Ruthven – the original “gentleman vampire” – on Lord Byron.
Mr. Darcy claims so many of the characteristics associated with the Byronic hero – he is arrogant, intelligent, cynical, introspective – I had only to expand on those qualities to create a Vampire Darcy, using his “curse” as further explanation for his dark, brooding nature.

Could you,  please,  tell us something more about your new novel: Pulse and Prejudice?
Pulse and Prejudice retells the story of Pride and Prejudice from the perspective of Mr. Darcy as a vampire.  The novel follows the same plot and uses the same style and language of Jane Austen’s classic romance; but now we follow Mr. Darcy through his meeting Elizabeth Bennet in Hertfordshire, returning to London, reuniting with her in Kent, and so forth, all through the lens of the paranormal.
The vampire element notwithstanding, the novel is historically accurate and remains faithful to 19th century literature with no anachronistic language. I did, however, sprinkle references to vampire lore and literature throughout, as well as pop culture “Easter eggs” from film, television, and music. The Acknowledgments page will give you an idea of what is hidden between the lines.

Thank you so much,  Colette,  for being my guest and answering my questions. Have you got any other project on the go?
I am currently writing a sequel to Pulse and Prejudice entitled Dearest Bloodiest Elizabeth. The action begins at Pemberley in January of 1815 but then moves to New Orleans immediately after the War of 1812. Although loosely inspired by another literary work, this novel takes our beloved couple far beyond Austen to a world that is darker, bloodier, and more passionate.

Visit Colette Saucier's website
to discover more about her and her work
Posted by Maria Grazia at 22:32

I agree that the dark, brooding personality of Darcy makes him a good candidate for the vampire treatment. Congratulations on doing that very successfully.

Very beautiful interview! Mr. Darcy as a vampire sounds great.
Thank you for the giveaway,

Thanks for the Interview! I love Vampires and their stories.
taina1959@yahoo.com

I loved this Vampires are in my blood just love them so whenever you can mix Austen pleasures with a little bite. I'm reading.... Thanks so much
US
Krista
bookreviewclubblog@aol.com

I have to say I'm not fond of supernatural Austen inspired novels but this one seems very intriguing! I'd love to read it!

Great interview! I totally agree with Gary Oldman as Dracula! :) Also, I've always thought Darcy has some characteristics that are connected with the Byronic hero. :)
And the book sounds great! :)

The book sounds like a really interesting twist on the original. Thanks for having the giveaway!

Sounds really great. Mr.Darcy will make an ideal vampire( I bet he'll be irresistible in this version too!)I'd love to get m hands on this one.

The book sounds really good. Thanks for the giveaway.
marlenebreakfield(at)yahoo(dot)com

I didn't like the one written by Amanda Grange because the vampire elements are a bit forced. I hope Pulse and Prejudice is better. And thanks for the giveaway, Colette.

I've got to add this to my paper library. :)

Mr. Darcy really looks like the kind of character who could be a vampire. Last year I participated in a fun contest in which we had to write short stories based on Austen's books, and one of my stories was a mystery tale about some people suspecting Darcy to be a vampire. Love the idea!

I have been wanting to read this book for awhile now. Darcy would make an excellent vampire, very moody he is.