NEW BOOK UNDER THE SPOTLIGHT: P.O. DIXON, MATTER OF TRUST. THE SHADES OF PEMBERLEY. GIVEAWAY! 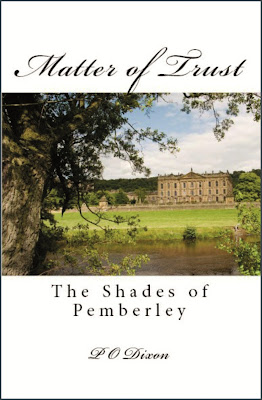 Matter of Trust: The Shades of Pemberley
A young bride he recently married to prevent a scandal. A mysterious, wayward aunt he never really knew. A woefully misguided sister he removed from harm’s way. Undermining Darcy’s relationships with the three women in his life is a most disturbing bombshell about his nemesis, George Wickham.

Scandal, secrets, deceptions—this story has it all. Its premise is what if George Wickham was not the son of old Mr. Darcy’s steward? What if he is of Darcy lineage?


A father’s dying words. A long lost relative from the past. What lies and deceptions promise disruption of all he once knew to be right and wrong?

Fitzwilliam Darcy has a history of cleaning up after George Wickham—the person whom he despises more than anyone in the world. First, he acted to save his sister from the villain when he set out to elope with her while she was only fifteen. Not long thereafter, Darcy impetuously declared his intention to marry a charming young woman from Hertfordshire, whom he secretly admired, to save her from scandal and ruination at the hands of his nemesis.

Darcy hoped he had seen the last of Wickham. Then an aunt he never knew showed up on his doorstep, after three decades abroad, shrouded in mystery and armed with secrets threatening his family’s legacy. For reasons of her own, his aunt invites George Wickham into their lives. Wickham's reappearance sorely tests Darcy's relationships with his bride, his aunt, and his sister.

Knowing Wickham better than anyone, Darcy sets in place a trap that is certain to ensnare the scoundrel, thus revealing the man's true character to everyone.

One Matter of Trust e-book is available for a giveaway contest open internationally. Leave your comment and your e-mail address below. It will end on October 23rd.

Now it's time to read an excerpt from Chapter 2

The fresh, crisp air did wonders for Elizabeth’s mortified nerves as she stood on the terrace and beheld the magnificence of the night’s starry sky. What a night it had been, and the ball had barely begun. Which had been worse: her sisters’ silly behaviour, her ridiculous cousin Mr. Collins’s insistence that he would be by her side throughout the evening, or Mr. Darcy’s singling her out amongst all the women in the room for a set? She had sworn to loathe him throughout eternity, not stand across from him on the dance floor in front of all of Meryton.

How it vexed her that they had spent much of the dance at odds. Their time together on the dance floor would have passed much quicker had their repartee been harmonious rather than contentious. She smirked in the face of such musings. As if such a thing were conceivable. He has never looked at me once, except to find fault. Not handsome enough to tempt him indeed!

Elizabeth looked up at the night’s sky and watched as the clouds danced across the moon. The night had held such promise. Her thoughts in preparing for the evening had been centred on one particular gentleman.

He should have arrived by now. An evening of gaiety with the dashing Mr. Wickham was just what she needed to take her mind off her troubles. Her mother had been none too subtle in putting Mr. Collins forth as a prospective son-in-law all week. One of five siblings, all daughters, Elizabeth had grown up with certain truths—her family’s estate was entailed away from the female line. At least one of the Bennet sisters needed to marry well. Mr. Collins, a distant relative, stood to inherit everything. Endeavouring to amend for the fortuitous circumstances of his birth, he aimed to make one of his fair cousins his bride. He had made his preference known almost as soon as he had arrived at Longbourn earlier that week. He had chosen Jane. However, Elizabeth’s mother, whose mission in life was to get her daughters husbands, had made it clear that Jane was soon to be engaged and thus offered Elizabeth, her next eldest offspring instead. That will be the day!

I think my mother is correct as far as Jane is concerned. Bingley likes her. It is only a matter of time before he offers her his hand. He would be a fool to do otherwise, for Jane likes him just as much! That must certainly raise all our fortunes. Elizabeth smiled warily. One might think such aspirations are mercenary. However, one thing is certain—if a woman must fall in love and marry, she is just as likely to be happy with a rich man as a poor man. Good sense only dictates that she must choose the former.

Once again, her favourite admirer, Mr. Wickham, graced her thoughts. So very pleased was she on the day of their initial introduction. His appearance was greatly in his favour. He had all the best part of beauty: a fine countenance, a good figure, and a very pleasing address. If he had but one fault, it would be his lack of fortune. Yes, he was handsome and amiable, but a woman would be imprudent to consider him a prospective husband. Had he been given the living he ought to have had, his prospects would be considerably more agreeable.

The gentleman of her musings suddenly stepped out from amongst the shadows at the farthest end of the terrace and walked towards her.

“Sir, you should have made your presence known.”

“Forgive me, but I would have done nothing to disturb your beautiful countenance.”

Gaiety replaced what theretofore had been tedium. He always knew what to say to make her smile. “You startled me. I welcome your company, sir.”

The few clouds that had dotted the sky gave way to the brilliance of the full moon. As the moon brightened, so did her spirits. He came! The evening promised to be a gay occasion after all.

“I thought I might not see you this evening.”

“Would you have been very disappointed had I not come?”

“I could never stand to disappoint you, hence my presence. I pray you have saved room on your dance card for your favourite beau.”

“My favourite, Mr. Wickham? Whatever gave you such a notion?”

“A man knows these things.”

Out of nowhere, Mr. Darcy approached them. Mr. Wickham recoiled. What audacity—interrupting a private conversation! His harsh, rebuking stare sent Mr. Wickham on his way. Next, the haughty man fixed his gaze upon Elizabeth.

“Pardon me, Miss Elizabeth. I require a word with you.”

(Reprinted with Author’s Permission. All Rights Reserved.)
Matter of Trust is available at Amazon Kindle Store
It is also available as a paperaback

OH, this book sounds so good. I have enjoyed all of the books that I have read by P.O. Dixon, especially 'He Taught Me To Hope: Darcy and The Young Knight's Quest'. I loved that book! I hope this one will be as good as it sounds very intriguing. Thanks for the giveaway opportunity.

I really fancy reading this book, enjoyed the excerpt! I've read lots of the author's other books, I think Bewitched, Body and Soul is my favourite, although To Have His Cake comes a close second. Thanks for the giveaway. Frawli1978 (at) gmail (dot) com

this sounds like a great read. thank you for the giveaway!

The story sounds promising. Please include me in the giveaway. Thank you.

I just started reading He Taught Me to Hope yesterday, and now you've got me hooked on Shades of Pemberley! :)

Oh, the excerpt stopped too soon. Again, Darcy makes a magnificent appearance. This story is surely as delightful as the rest of P.O. Dixon's books. Thanks for promoting this new story.

This sounds very intriguing! the evil Wickham. Love to read it!

This book sounds like it is going to be really good. :-)

Wickham finally corned and its true nature exposed. Good news! I can't wait to read about that.
cyrano123(at)live(dot)fr

reads so much better than other books about Pemberley

Definately on my TBR list! Thank you for the giveaway!
cherringtonmb at sbcglobal dot net

I truly appreciated perusing your article and I saw that you have an extraordinary learning of asp.net. In the wake of perusing this, read latest pakistan urdu news
I additionally have an energy. Indeed, Valentines desktop backdrops will clearly help you to wish your friends and family.