My guest today is really special to me and I hope you'll be ready to welcome her and make her feel at home here at My Jane Austen Book Club.

Rebecca Smith is the author of three novels published by Bloomsbury: The Bluebird Café (2001) Happy Birthday and All That (2003) and A Bit ofEarth (2006). Barbara Trapido called her “the perfect English miniaturist”.
Rebecca studied History at the University of Southampton and is now a Teaching Fellow in English and Creative Writing there. From autumn 2009 until summer 2010, Rebecca was the Writer in Residence at Jane Austen’s House Museum in Chawton, Hampshire; she continues to work closely with the Museum. Her first work of non-fiction,Jane Austen’s Guide to Modern Life’s Dilemmas, has just been published in North America and the UK. Rebecca is Jane Austen’s great great great great great niece.

Rebecca’s first novel for children, Shadow Eyes, was shortlisted for The 2012 Kelpies Prize and will be published sometime in 2013. She is currently working on another novel.

Here are her answers to a few  questions about her Austen-inspired book and her writing. Check the giveaway details below this post and take your chances to win in the rafflecopter form. Good luck! 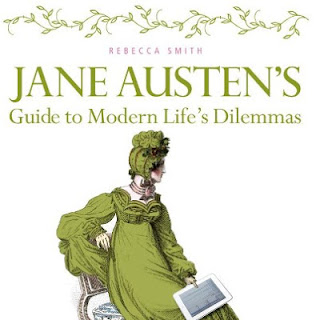 While researching Miss Jane Austen’s Guide to Modern Life’s Dilemmas, you immersed yourself in Jane Austen’s books as well as her letters and early writings. What were some of the most surprising things you learned about Austen in the process?

I found that I could answer every single dilemma with advice from Jane’s work or letters! Dozens and dozens of different dilemmas were suggested by family, friends and my students – there were too many to fit into the book – but all of them could have been answered. The more I read, the more I saw answers.  I kept thinking of extra dilemmas that I’d like to include. I found that Jane’s wit and wisdom could be applied to anything.

I felt as though I was getting to understand much more about Jane herself, too. I was struck by how determined she’d had to be to achieve what she did. The way that she carried on writing and working so hard at her fiction for so many years before she was finally published is really inspiring. She was deadly serious about her art, and yet also very quiet about it. This wasn’t a surprise, but I was really struck by it. The unfairness of Georgian society was also really striking – the way that Jane was forced to depend so much on her brothers. Women’s freedom was so limited. Jane’s achievements are even more impressive when one thinks about how little she was allowed to do. Her career might have taken off much earlier if she’d been able to go to university or to act for herself in approaching publishers. Despite these obstacles, Jane embraced life and I was often struck by how jolly she was – so often writing things like “good apple pies are a considerable part of our domestic happiness”. Her family and friends were so lucky to receive those letters! Jane must have had times of despondency too – the gaps in the letters that her sister, Cassandra, kept are intriguing. We don’t have any from the period just after Jane’s romance with Tom Lefroy.
I was also struck anew by how important and sustaining Jane’s relationships with her sister, female friends, some of her brothers and her niece, Fanny Knight were. Jane was writing romances, but in her real life these relationships and friendships were the most important to her.
Why do you think Austen’s advice and characters still resonate with people    today?

Jane Austen was just so astute. She, like Elizabeth Bennet, was “a studier of character”. Her writing shows us how ahead of her time she was in delineating certain characteristics and ways of behaving. Jane understood exactly what motivated people and how they would feel and behave in different situations. She was very well read, and also had an instinctive grasp of human psychology. Her heroines all make mistakes but learn to trust their own judgement and to find the right balance between following their heads and their hearts. The situations that the characters find themselves in are essentially the same as those faced by people today – they are concerned with love and relationships, friends and family, homes, security, money, fulfillment, appearances… People are worried by the same things now as they were 200 years ago and are still just as interested in the tiny details and implications of the decisions that we all have to make – everything from which shoes to wear to who to spend their lives with.

Was it difficult to apply Austen’s wisdom to situations that are unique to today’s woman—for instance, un-friending someone on Facebook or dealing with online dating?

No, it wasn’t. The principles by which an Austen heroine must learn to behave are such excellent ones that they can be applied to situations today. It’s all about a combination of good judgement and imagination, or sense and sensibility.

What did you enjoy most about the process of developing this guide? 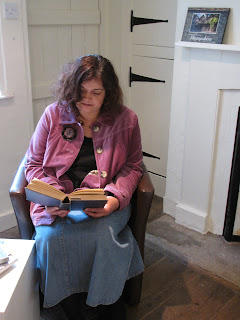 I loved being so immersed in the novels, Jane’s letters and juvenilia and in the biographies I read. I loved      making connections between these to answer the dilemmas. Being the writer in residence at Jane Austen’s House Museum was a delight. I love spending time in Jane’s house and garden. That really helped me to write the book too. I’ve really enjoyed it, but my children may be growing a little weary of being offered advice from Jane Austen…
Your book addresses several timeless challenges that can almost be resolved with help from modern day technology. For example, Skype and email are valuable resources for long distance relationships. Do you think Jane Austen’s feelings about love and life would be different if she had these resources at her disposal?

Not really. Long distance relationships are of course easier nowadays, but they can still be very difficult.  I don’t think the plot of Persuasion would have been very different if Anne Elliot and Captain Wentworth had had iPhones!
Jane loved to write letters – she must have written 1000s. She wrote letters the way people now write emails. I think she would have enjoyed being able to communicate so easily with those she loved. Skype and emails are no substitute for actual togetherness, though, and Jane and her heroines would have understood that. Technology can’t stop you from missing somebody, and there are still situations where Skype and so on can’t be used. Jane and her sister often longed for news of their brothers who were away at sea; a situation that those with loved ones serving in the armed forces or working in dangerous places today will know only too well. The issues in long distance relationships would still be about trust, commitment, being able wait, and coping with feeling sad and lonely. I don’t think that has changed much.

I was lucky enough to grow up in a family where everybody was reading all the time. My sisters and I were given so many wonderful books and encouraged to develop our own tastes. The Jane Austen connection is on my father’s side of the family, whilst my mother is the novelist, Shena Mackay. Actually, I can remember my maternal grandmother once telling me off for reading Emma; I can’t recall now why she was cross with me, but she said that I had no right to have an opinion on anything until I had read all of The Great Russians!

Which of Austen’s characters do you think modern women can learn the most from?


It all depends on who they are and what their situation is. Jane deliberately set about creating very different heroines and distinctive characters in each of her novels. When she was writing Emma she said that she was creating “a heroine whom no-one but myself will much like”. It’s so sad that Jane died so young – there could have been many more wonderful novels - but in those we have there is a treasure trove of different characters and situations to consider. It’s also important to remember that the novels are novels – they are meant to be read and enjoyed as such – it isn’t all about learning lessons. One of the reasons that people like reading or writing books about Jane Austen and her work is that they wish there were more Jane Austen novels.


There is much that I would like to know but that she would think me very impertinent for asking! I would definitely ask about her unfinished novel, Sanditon – what was going to happen next, how was it all going to end? I would love to know that.

Thanks a lot Rebecca, that's all. It's been a great pleasure talking with you. Best wishes for everything in your life and writing career.

Fill in the rafflecopter form below and take your chances to win a paperback copy of Rebecca Smith's Miss Jane Austen’s Guide to Modern Life’s Dilemmas. The giveaway is open internationally and ends on November 15th.

a Rafflecopter giveaway
Posted by Maria Grazia at 00:30

Love this post, true I don't think Jane would approve of some of the relationships long distance. I would love to be back in Jane's time:) Ever feel like you were born in the wrong era?
Thanks lovely post

Oh, you've got to spend time in Jane's house and garden... That must have been heaven.

This interview is very interesting! I really liked it. Thank you! I hope to soon have this book! :)

Welcome to the club, Rebecca! Your book sounds fascinating.

I enjoyed the interview with Rebecc. Your book sounds fascinating. Thanks for sharing and for the giveaway opportunity.

Welcome! Thank you for the giveaway!

To have the opportunity to be a writer is residence in Jane's house while reading her work and writing about her seems wonderful.
I would like to know more about the dilemma's you used in your book.
This seems another great JA related work!

Your comment about Jane having an instinctive grasp of human psychology made me picture her as a modern day therapist. Then she would have a ton of things to write about. :-)

This is so exciting! A Jane Austen's relative. Enjoyed reading this interview.

I always enjoy reading how others interpret Jane's letters and writings. I would love to win this book

I really enjoyed reading this interview. I've had the pleasure of a little talk by mail with Rebecca and I know the lovely person she is.
Thank you for the giveaway opportunity!

Always exciting to "meet" descendants of Jane Austen! Thanks for sharing this.

Maria, to be interviewing a descendent of Jane Austen must be one of the best things in the world, given your love for JA. I enjoyed the interview and thank you both for giving readers the opportunity to know her.

I was so lucky to win this book. Thanks! It looks beautiful!