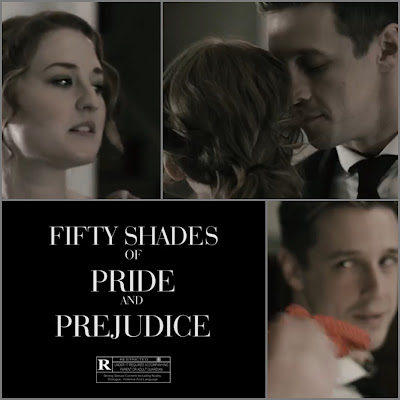 Does it make sense? No? Well, it makes fun!

Now, try it yourself!

After watching,  I decided to discover more about the two creative minds behind it and here is the result of our chat.

First of all let me welcome you to our Austen online club,  Caitlin and Heidi.  How did you come up with this idea?

CC: Heidi and I were in a sketch program together. We're both big Jane Austen fans, and decided it would be fun to get a little historical with our sketches and juxtapose a modern "love" story with one of the greatest all time.

HL: I love the piece of trivia that Christian Grey is based off of Edward Cullen who is based off of Fitzwilliam Darcy. So basically we took out the middle man and came up with this mash up.

Elizabeth Bennett and Anastasia Steele are kind of opposites when it comes to personality. How did you decide how to play that?

CC: Nothing against Dakota Johnson, but Anastasia Steele is spineless and kinda boring. Much more fun to go with Elizabeth Bennett's personality.

HL: Lizzie Bennett is pretty feisty, so she (spoiler!) ends up not being cool with it – which is probably what would happen if she were really put in that situation.

Fitzwilliam Darcy and Christian Grey are not quite as opposite, but obviously Darcy is a million times better. How did that character come about?

HL: It's funny to think that Mr. Darcy might be hiding some secrets of his own!

Jane Austen is one of the best authors of all time, and E. L. James... isn't. How did you marry the prose of these two writers?

CC: We focused mostly on Jane Austen's prose because she's just so fun to read, with a sprinkle E. L. James because some of her language was so corny we legit couldn't believe people thought it was sexy. I'm still stuck on "Christian-flavored popsicle." I wish I was that intentionally funny, but I suppose nobody is.

HL:  We pretty much decided to juxtapose writing that's universally heralded as being great and writing that's notorious for being...less than that. It was weirdly easier than you would think. 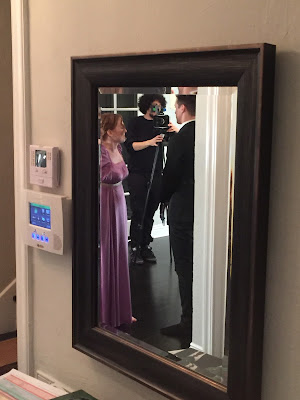 Why this mashup though? Why? Isn't it insulting to Jane Austen?

CC: Nah, Austen had a sense of humor. I think we add a lot of pomp to Jane Austen's work because it's 200 years old, but Jane Austen was really funny and had a very satirical view of society. We'd like to think she'd like it, but maybe we're hoping for too much.

HL: Jane was pretty satirical and wicked. She would probably be the first person to make fun of the reverence that we give her today! Plus our sketch comes from a place of love. She influenced me so much, so it's nice to be able to honor her in some way.

CC: The dude is busy! And we also don't have his contact information. Besides, we think our Mr. Darcy is pretty handsome too ;)

HL: I think that the only Mr. Darcy that's better than Colin Firth is the Mr. Darcy in the reader's head. Jason had pretty big shoes to fill, but I think he did great!

CC: Heidi and I wrote a script, but the actors had great chemistry and improv'd a fair amount. There were a few scenes where every shot was different (especially the "50 shades of proud" scene). We decided to go for costuming and scenes from Pride and Prejudice, but it was shot like the 50 Shades of Grey trailer (sexy close-ups and everything).

HL: So much fun! It was a really smooth shoot and our team were total pros. I'm also super impressed that Nicole and Jason were so willing to do what we asked them to. Pros all around! 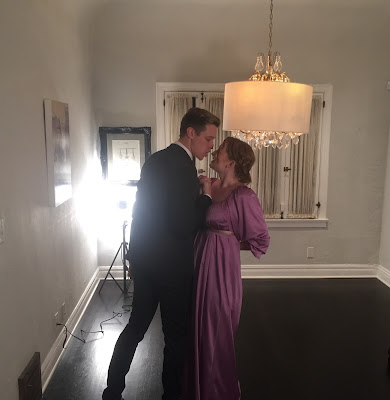 Any funny stories? Anybody involved in the production that didn't get some of the Austen references?

CC: When we first had this performed at our sketch program rehearsal, several of the directors just didn't get it. Maybe they'd never read Jane Austen? They also thought the dialogue inspired by E. L. James was cringeworthy and hated it - even though that was actually the point. So we decided to put this out there for people who would get the references to enjoy. And we hope you did!


HL: The first version of the sketch had a lot more dialogue from E.L. James and the feedback we got on it was, “Why is this so poorly written?” We were just like, “Uh, we didn't write it.....”

Discover more about Caitlin and Heidi

Caitlin first fell in love with Mr. Darcy when she read Pride & Prejudice in middle school, and that love has stayed constant throughout the years - from her days at an all-girls Catholic high school to her time at Boston University to her adult years in Los Angeles as a comedy writer. The dream is to create stories about women as badass as Elizabeth Bennett while still finding time to eat cheese and rail against the patriarchy.

Heidi Lux holds a BFA from NYU’s Tisch School of the Arts. She has studied and performed at the Upright Citizens Brigade Theatre and her solo show, Full Glitz, premiered at the Hollywood Fringe Festival. She has written for the 2017 CBS Diversity Showcase. Currently, she is a writer/performer on Pack Theatre sketch team Dandy and writes for topical sketch comedy show Top Story! Weekly at iO West. She has written for CollegeHumor, Smosh, Reductress, and Time Out Los Angeles. Her favorite Jane Austen novel is Persuasion because there's just something so satisfying about the idea of getting to rectify your past relationship mistakes.

It is really funny:) Thank you for sharing it, Maria. At first it sounded like a little "blasphemy", but I watched it and enjoyed watching it two times:)))) I would say that it is a hilarious parody of the Fifty Shades, which does not diminish P&P but which IMHO illuminates the absurdity of the Fifty Shades

That's exactly what I thought, Oloore! No blasphemy, but an intelligent parody of the absurdity of Fifty Shades. Glad yoy liked it.