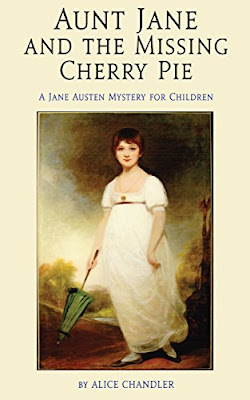 But what to do about my granddaughter Dana? How could I introduce her to the author I loved and give her at least a sense of what Jane Austen was like? I thought Dana would like a story about Jane Austen, if only I could find the right format for it.

My first decision was borrowed straight from Stephanie Barron, whose Jane Austen mysteries I so much enjoyed. Mine would be a mystery story, too—only at a child’s level rather than an adult’s. That was how the mystery of “Aunt Jane and the Missing CherryPie” originated.

My next decision was deciding who should be the narrator. Jane Austen lived surrounded by visiting nieces and nephews—some, very sadly, because they needed childcare after their mothers had died in childbirth. (Four of Jane Austen’s sisters-in-law died in this way—two after the birth of their eleventh child.) We know from Jane Austen’s nephew that she told “the most delightful stories, chiefly of fairyland, and her fairies had all characters of their own.” We also know that she wrote what she called Miscellaneous Morsels for her brother James’s daughter. So, Jane-Anna-Elizabeth Austen (always called Anna) became the narrator of my story.

But how should I portray Jane Austen? I didn’t simply want to give facts—born in 1775, wrote six world-famous novels, lived in a world of candlelight and horse-drawn carriages. I would try to give some sense of that physical world by the details I included and the illustrations I chose. The frontispiece would be the so-called Zoffany portrait of Jane Austen. Its authenticity may be somewhat in doubt. But its portrait of Jane Austen in a simple white dress, standing outside in a slight wind, and with little smile on her face would be the perfect backdrop for the Jane Austen I was writing about.

My story begins with Jane Austen sitting at her writing desk, with a little—possibly ironic—smile on her face. Her kindliness to Anna is apparent throughout the story, as is her inexorable logic as she one-by-one eliminates the possible robbers who might have stolen the cherry pie. I also chose to emphasize Jane Austen’s careful use of language in my story by having have Aunt Jane teach young Anna a number of new words and their meanings. Cassandra is in the story, too. One can’t have Jane without Cassandra, can one? Like all of Jane Austen’s writings, my story ends happily, with a resolution of all conflict—and a brand new, great big beautiful cherry pie!

I did toy for a while with adding an appendix to my story, which would include some of the facts about Jane Austen’s life and writings and the times in which she lived. If anyone reading my little story (or more likely reading it aloud to a child) would like to comment on whether the story would benefit from a factual appendix, I’d be grateful to know. One of the advantages of e-book publishing is that one can make changes almost instantaneously.

Alice Chandler holds a doctorate in English Literature from Columbia University and is the recipient of two honorary degrees. An English professor for many years, she was President of the State University of New York College at New Paltz from 1980 to 1996 and was acting president of both Ramapo College of New Jersey (2000-2001) and the City College of the City University of New York (1979-1980). She is a past Chairperson of the American Association of State Colleges and Universities

Aunt Jane and the Missing Cherry Pie is available from Amazon.com as a Kindle electronic book. (For anyone who has not used an e-book before, just download the free Kindle app on your computer or iPad and you are ready to read.)


a Rafflecopter giveaway
Posted by Maria Grazia at 07:53

What a great idea! I often wondered how to share my love of Jane Austen with my young daughter and this seems like the perfect way to do it.

I discovered the book last week via the Jane Austen Centre Bath and I loved it! I especially loved that Anna Austen (later Lefroy) was the narrator. While in life, Jane Austen's closest niece was Fanny Knight. Alas, Fanny really didn't do Aunt Jane proud when she wrote some "unfortunate" things about Jane and Cassandra(today is Cassandra's passing day) towards the end of her life(ok, she might not have been in her right mind)...I refer to Fanny Knight as "Caroline Bingley". Whereas, I believe Anna Austen Lefroy was, as best I can tell, true to Aunt Jane's memory. She tried to finish Sanditon, for example. She wrote glowing things to her half(?)-brother when he came to write Jane Austen's bio(not fully factual but it put Jane Austen back on the literary map). We have Jane Austen's letters to Anna about writing. A July 16, 2011 Jane Austen Centre article called Anna "A believer in True Love". So....maybe some of the above might be of interest in appendix??? P.S. I love the Rice portrait...great choice. Even if it's not really Jane Austen, but one of my favorite fiction authors(Jane Odiwe) is a supporter, it's my image of a young Jane Austen. "A true believer in Love Anna Austen"

I absolutely love the cover picture and it speaks a thousand words. What a cute title, too. I would love to read this!

Love this idea! It sounds fantastic.