IS THERE ANY HOPE OF REDEMPTION FOR GEORGE WICKHAM? LILY BERNARD ANSWERS MY QUESTIONS ON THE PROTAGONIST OF HER "NEW BEGINNINGS"

Wickham is the protagonist of Lily Bernard’s “New Beginnings” . What’s your opinion on dashing George Wickham? Compare yours to Lily’s opinion reading my interview with her especially focused on the character we all love to hate while reading Pride and Prejudice.

1. In your novel Wickham’s aim in life is to revenge against Darcy. Is he even more wicked than in the original version of the story, then?


Yes, during the course of the story we learn that he is much more wicked than he was in the original. Besides his usual complaints (not having the respect, social standing or wealth that Darcy does), he
vows to destroy Darcy because Wickham believes Darcy is solely responsible for death of his betrothed. He is the protagonist when the story begins but for the remainder of the book he is mentioned only in the context of the ramifications of his prior activities. 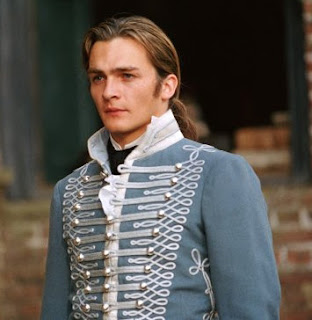 2. Why is Wickham so jealous of Fitzwilliam Darcy?


Wickham has been jealous of Darcy since they were boys. Wickham claims that old Mr. Darcy loved him more than his son, and yet, Darcy was the heir to Pemberley and all that it entailed. When Darcy’s father died, he followed his father’s instructions regarding the bequest to Wickham. Darcy
told Wickham that the living in Kymptom would be his after he took orders. When Wickham refused the living for three thousand pounds, he drank, womanized and gambled away the money in a very short time. Unlike Darcy, Wickham operates under the assumption that he is “above” having to work despite having no source of income other than his occasional gambling winnings or financial “gifts” from the wealthy objects of his temporary affection.

3. How dangerous is George Wickham for Darcy and Elizabeth’s happiness?


When Elizabeth and Darcy were falling in love in Hertfordshire, Darcy had no idea that Wickham had threatened to destroy him and everyone he cares about. After Elizabeth accepts his proposal and they are walking to Longbourn to share their happy news, Darcy’s valet brings him an urgent express from Richard Fitzwilliam. Darcy reads the letter and learns how truly nefarious Wickham is. He immediately leaves Elizabeth in Hertfordshire to help save a beloved member of his family. Wickham is determined to deny Darcy any happiness because he feels Darcy has destroyed his only chance to be loved.


4. Is he an 18th century libertine? And do you think he is more a Casanova type (joyful womanizer) or a Don Juan type (cynical seducer)?

Wickham certainly fits the definition of a libertine and he has always been portrayed as a Don Juan. He pursues women who he cannot only bed, but who can buy him expensive gifts and expose him to other wealthy women of the Ton. When he first meets Nora, his seductive behaviors are in full force until he realizes that he has real feelings for her. When he asks Nora to sneak into his room at night, his old behaviors are evident. I am still questioning whether Wickham could ever truly be reformed by his love for Nora Kelly.


5. Is there any hope of redemption for him?


Wickham may have been happy being married to Nora and traveling to the Americas to start a new life, but that life would have required hard work. There is a saying, “a leopard never changes its spots” and whatever events in his younger life that shaped him to become the adult he was, I am
pessimistic that Wickham could ever be permanently reformed.

6. What’s Wickham’s most seducing quality in your opinion?


When George visits Pemberley, Nora immediately notices how handsome he is. He flatters her, kisses her hand and tells her to call him George. His most seductive qualities are his good looks, his gift of gab and his ability to quickly determine whatever vulnerability he sees in the people he meets. He flatters and compliments and slowly takes liberties with Nora. His seduction of women of the Ton, Pemberley’s young maids and Nora, all began with his ability to discover and exploit the women’s vulnerabilities.

7. What is it, instead, you really can't stand in his behaviour?


Until he meets Nora, Wickham appears to have no moral compass and he is guided solely by his own selfish needs. He takes no responsibility for his degenerate behaviors. Rather than mourn Nora in his own way, his only reaction is to destroy the Darcys. Revenge and hatred of Darcy are what motivates him. I try to see the good in everyone I know but except for the short time he was with Nora at Pemberley, Wickham is the same self-centered vengeful man he always was.

8. Do you agree with those fans who think Jane Austen’s rogues are very intriguing? Maybe more than her heroes?


I rather prefer Austen’s heroes; Darcy, Knightley, Captain Wentworth and Edmund Bertram (after his brief lapse in judgement regarding Mary Crawford). Wickham may the worst of Austen’s rogues but Henry Crawford is not far behind him. The true character of Austen’s heroes may take some time to be revealed but I most definitely prefer the heroes to the villains.

9. So what do you think of  Wickham, is he your favourite rogue? Do you like any other of Jane Austen’s bad boys?

As I mentioned, I think Wickham is Austen’s worst bad boy. His drinking, gambling, cheating and debauchery started at Cambridge and only got worse as an adult. I suppose he is my “favorite” rogue because it is so easy to demonize him.


10. Without giving away too much, does Wickham surprise the readers with a differently twisted plot?

Yes, that was my plan. When the story begins I wanted to describe his behaviors in a more positive light. I hoped that he could be reformed by his love for Nora. However, events reveal that Wickham is still the same jealous, greedy and evil man he has always been. 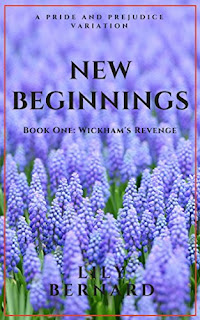 A broken-hearted George Wickham leaves Pemberley after vowing to destroy Fitzwilliam Darcy and everyone he cares about. Darcy knows nothing about Wickham's threat - he is in Hertfordshire helping Charles Bingley. After insulting her at the Meryton Assembly, Darcy meets Elizabeth while walking near Oakham Mount. Elizabeth accepts his apology and over time she comes to know him as the man he truly is.


After months of walking together and learning about each other's lives, Elizabeth and Darcy fall in love and she happily accepts his proposal. Before Mr. Bennet can grant his permission, Darcy receives an urgent express from Colonel Fitzwilliam. The contents of that letter change the course of events for ODC and many others. Can there be a HEA when Wickham is consumed by his hatred for Darcy? Can Elizabeth Bennet find happiness without Fitzwilliam Darcy in her life? All these questions (and many more) will be answered in "New Beginnings Book One: Wickham's Revenge."

Lily Bernard grew up in the Desert Southwest and now resides on the East Coast. She is a retired speech pathologist who loves to travel, cook, read and all things Jane Austen. After reading many, many Pride and Prejudice variations, Lily thought she would write one herself. An Invisible Thread was her first novel and New Beginnings: Wickham's Revenge, her second JAFF is now available. She hopes you enjoy reading them!

Win 3 ebook copies (INT.)  and 3 paperback copies (US only) of NEW BEGINNINGS!

a Rafflecopter giveaway
Posted by Maria Grazia at 20:19

I admit to enjoy reading about the 'bad' men of Austen

Sounds interesting! Although, for the most part, I prefer Jane Austen's heroes, the rogues do have a certain appeal at times, especially when a writer goes to a lot of trouble to create a back story that explains how they became the men they are.

I'm intrigued to learn what is going on with Col. Fitzwilliam, and how the express could change the course of events. My angst-o-meter is really going off about this title. I guess I'll just have to read it and find out! Looking forward to it.

Sounds intriguing although I’m a little sorry that he doesn’t seem to be redeemed as I do enjoy when the rogues are redeemed even if it’s unrealistic.

Yeah, it seems very interesting. I really do like bad boys too, but what he did was miserable. Anyway, maybe we can give him a second opportunity... :D Thanks for the giveaway!

I look forward to seeing what evil deeds Wickham is up to! Thanks for the chance to win the book!

I love to hate Wickham as he is Austen's most evil character (along with Henry Crawford and John Willoughby). Nora Kelly sounds like a wonderful character that could change his rakish ways. I wonder what happened to her that drives Wickham to plot his revenge against Darcy.

On another note, I keep up seeing the cover has changed a few times. Is the cover finalised?

Yes, the final cover is seen on the Amazon page. Thanks for asking!

I, too wondered about the cover. I have not read the author's first book so thank you for this review so I could be introduced to a new JAFF author for me. Oh, I can easily imagine the revenge that Wickham would want on Darcy. Thank you for the giveaway.

I like Austen’s heroes best too! It would be interesting to see everything from a different point of view though.

I noticed the giveaway has ended, were winners announced?