WHEN MARY MET THE COLONEL BY VICTORIA KINCAID. THE AUDIOBOOK IS OUT! 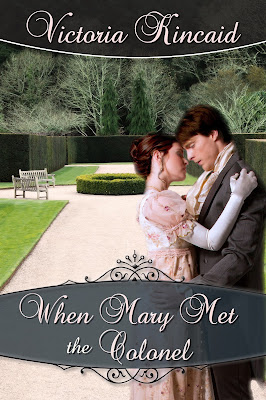 Hi Maria Grazia and thank you for welcoming me back to your blog!  Today I’m pleased to announce the release of the audiobook of my Pride and Prejudice novella, When Mary Met the Colonel.  This was the first of my secondary-character P&P variations and has a special place in my heart.


I wasn’t sure, when I started writing it, if I could make a secondary-character story compelling and if readers would believe a love story between Mary and Colonel Fitzwilliam was believable.  Fortunately—based on the book’s reception—the answer to both questions appears to be yes!  I feel fortunate that I was able to secure the wonderful Stevie Zimmerman to narrate the audiobook of When Mary Met the Colonel.  She always does a great job!

Below is an excerpt from the beginning of the book.  I hope you enjoy it!

Fitz cleared his throat. “You must be Miss Mary Bennet.”
The young lady dabbed at her eyes with a corner of the handkerchief, which was still fairly clean despite its tumble to the stones. “Yes. The two elder Miss Bennets are the pretty ones, and the two younger Miss Bennets are the lively ones. I am the one in the middle—neither pretty nor lively.” Her hand immediately flew to her mouth. “Oh, dear me! That sounded terribly bitter, did it not? I apologize, Colonel.”
Ah, he suspected that he had now uncovered the reason for her tears; such sentiments might be particularly acute on the day one of her sisters married. Fitz took the liberty of seating himself next to Miss Bennet. “Do you fear to offend my delicate sensibilities?” He batted his eyelashes absurdly, provoking laughter. “Only apologize if you are speaking an untruth.”


Her lips thinned into a flat line. “No. I always speak the truth.”
“No, you do not.” This caused her eyes to raise to his face in bewilderment. “You are quite pretty, perhaps not in the same way as your sisters.” Mary’s lips parted slightly, and she appeared, if anything, even more bewildered. Had no one ever said as much to her? “And if by ‘lively’ you mean that your sisters chase men wearing red coats, then I am quite pleased you are comparatively sedate.” This elicited a giggle from the young lady. “Your presence is quite restful, and so far your conversation is vastly more interesting.”
She blinked rapidly at him as if not understanding his words. Surely someone else had thought to tell her how pretty she was? Then a deep blush spread itself over her face and the part of her neck revealed by her gown’s neckline, much higher than today’s styles. Why did a simple compliment provoke such a reaction?
“Thank you. It is very kind of you to say.” Her voice was almost a whisper. Mary fixed her gaze on a number of blossoms in her lap.
“I did not say it to be kind. It is what I observe.”
Blushing an even darker red, she glanced about the clearing as if hoping to be rescued from this conversation. She was not only unaccustomed to compliments but also exceedingly shy, Fitz decided. She resembled Georgiana a bit, although Miss Bennet must be at least two or three years older.
Apparently deciding that no help would be forthcoming, she returned her gaze to the hands tangled in her lap. She cleared her throat. “Mr. Darcy said you are recently returned from the peninsula.”
Fitz blinked, a bit surprised at the abrupt shift in topic. Did she wish to direct the conversation away from the personal? “Yes.”
“I have been following the war in the papers,” she murmured. Fitz raised his eyebrows. A woman had never broached this topic with him. “Do you believe those accounts to be accurate on the whole?”
Fitz leaned toward her slightly. “Are you certain you wish to speak about this? Many women find the topic to be…distressing.”
A crease formed between her eyebrows. “Sir, the events of this war will affect our country for generations to come. It will influence the futures of my nieces and nephews. Faced with such weighty matters, I do not understand why anyone believes I should care about the latest designs in lace!”
Abruptly, she bit her lip and blushed. “I apologize for that outburst. I have had a trying day. I am overwrought.” She stood quickly, straightening her skirts. “I will trouble you no—”
Without forethought, Fitz seized her hand in his. “Please do not leave just when you are proving to be an interesting conversational partner.” He remained seated, hoping it would encourage her to stay.

Without the beauty and wit of the older Bennet sisters or the liveliness of the younger, Mary is the Bennet sister most often overlooked.
She has resigned herself to a life of loneliness, alleviated only by music and the occasional book of military history. Colonel Fitzwilliam finds himself envying his friends who are marrying wonderful women while he only attracts empty-headed flirts.
He longs for a caring, well-informed woman who will see the man beneath the uniform. During the wedding breakfast for Mr. Darcy and Elizabeth Bennet, a chance meeting in Longbourn’s garden kindles an attraction between Mary and the Colonel.
However, the Colonel cannot marry for love since he must wed an heiress. He returns to war, although Mary finds she cannot easily forget him. Is happily ever after possible after Mary meets the Colonel?
VICTORIA KINCAID

I always find a love story between Mary and Colonel Fitzwilliam believable. My favourite story line and I love this book

I love audiobooks! And Stevie Zimmerman is one of the best. Thank you for the giveaway.

I enjoy reading the Col Fitzwilliam-Mary pairing and this one sounds fantastic. Thanks for the giveaway!

Ooo! An audiobook. As my vision lessens, my appreciation increases. And I do so appreciate your works.

I enjoyed reading this story so much. Looking forward to having it read to me.

I've recently read it again. I adore the Colonel and I hope more books will be written about him!

Oh, this sounds like a really fun book! I would definitely love to read it -- or hear it!