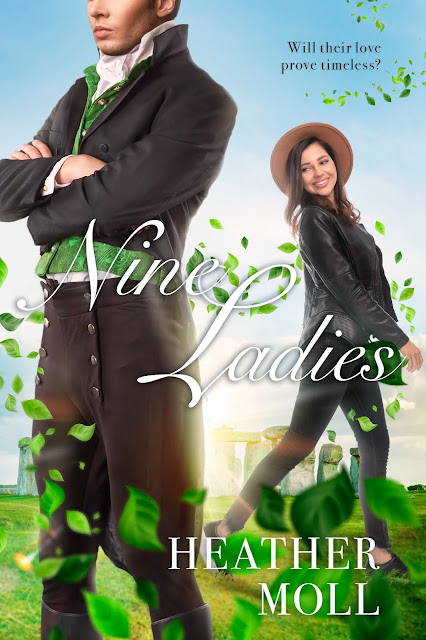 Hello Maria Grazia and thank you for welcoming me back to My Jane Austen Book Club! I’m so glad that I get to share a snippet from my new Pride and Prejudice variation with your readers. Nine Ladies is a time travel story with a modern Elizabeth and a Regency-era Darcy. It’s full of secrets, and one of them is what Elizabeth knows about the fate of Pemberley in the 21st century. After she goes back in time, she has to balance what she knows will happen against what—if anything—she can change. In this scene, Elizabeth’s new friends in England—in 2011—have taken her to see what remains of a Georgian-era building.

Elizabeth was startled out of her reverie when Missy stood; the bus had stopped. Her mind was too full for conversation with the others. Her regrets about falling out with Jane, and doubts about her future, distracted her. They crossed a bridge over a swelled stream and walked up a gradual hill. Elizabeth outstripped the others and reached the top first. Her whole attention was captured by Pemberley House. It had once been a large, handsome stone building, standing on the rising ground and backed by a ridge of high woody hills.

Pemberley was entirely devoid of warmth, and its beauty was haunting, not majestic. The exterior walls still stood at their full height, but the house was completely open to the elements. Rows of empty windows stared out like dead, unseeing eyes. She walked one side of the massively columned, blemished exterior until she came to a doorway. Grass grew within. Walking through the frame, she stopped short at the sight of the exposed interior brick. It seemed immodest, somehow, to be able to see what ought to have been concealed.

Elizabeth craned her neck to the sky. The roof was entirely gone, as were the intermediary floors. The original ornamental stonework remained on the exterior, but within, it was more like an archeological dig than a home. Most of the interior walls, like all of the exterior ones, still stood at their full height. Elizabeth took a few pictures of the ceiling-less brick rooms with their glassless windows and unadorned fireplaces.

She went outside and tried to enjoy the views of the valley, but her attention was continually drawn to the imposing structure. She pulled out her phone to snap a few more pictures.

“Elizabeth!” Charlotte jumped down through one of the ground floor’s glassless windows. “What do you think?”

“It’s depressing to see a place like this in ruins.” Elizabeth shook her head, dispelling the building’s gloomy aura. “I’m having a great time, though. What happened here?”

Charlotte shrugged. “Willie could tell you from one of his guidebooks.”

They walked around the façade to where the others had gathered. Willie clapped his hands with glee when Charlotte told him Elizabeth was curious about Pemberley’s history.

“There had been a house on the grounds of Pemberley’s ruins for a thousand years. Until the nineteenth century, it was held by the Darcy family. The home featured oak ornamental panels and stucco plasterwork by Italian masters, as well as Adam fireplaces in marble and an ornate mahogany staircase.”

“In 1811, the owner died without issue. His sister inherited, but her husband was an extravagant spender. She died young, and the husband died later deeply in debt. They had no children, and Pemberley was sold several times over for the next one hundred years, falling into disrepair with more of its land parceled off.”

“But what happened to the house? Why is the roof gone?” Missy interjected.

“Pemberley was sold in 1919 at auction to be demolished for building materials. The roof was stripped of lead, the massive wooden joists removed, and some of the finely decorated rooms sold as architectural salvage. The remaining structure is under the care of English Heritage.”

“Why? Tear it down and build something else here!” Elizabeth’s stomach dropped at Missy’s idea. “I could go for a pudding! My treat.”

Elizabeth took a final look over her shoulder at the imposing shell. She suspected Pemberley only retained a small sense of the dignity and grandeur of its former life.

About the Book: Nine Ladies

The Darcy family has grudgingly kept the secret about the power contained within a nearby stone circle called Nine Ladies. Fitzwilliam Darcy is forced to contend with this secret when a young woman from the future appears at Pemberley. Until the opinionated stranger can return to when she belongs, Darcy is responsible not only for her safety, but also for ensuring that nothing she does threatens Pemberley’s well-being.

Elizabeth Bennet has returned to England to take care of her estranged father, and her life was off track long before she walked into that stone circle at sunset. She quickly discovers that, as a poor and single woman, she’ll have to rely on the arrogant Mr. Darcy. She tries her best to survive in the nineteenth-century until she can return home but, as she and Darcy grow closer, the truth she knows about his and Pemberley’s bleak future becomes harder to keep.

How can Darcy and Elizabeth overcome 200 years of differences in this era-spanning love story?

You can purchase the book at Amazon

About the Author: Heather Moll

Heather Moll is an avid reader of mysteries and biographies with a masters in information science. She found Jane Austen later than she should have and made up for lost time by devouring her letters and unpublished works, joining JASNA, and spending too much time researching the Regency era. She is the author of Nine Ladies, Two More Days at Netherfield, and His Choice of a Wife. She lives with her husband and son and struggles to balance all of the important things, like whether or not to buy groceries or stay home and write. Visit her blog and subscribe to her newsletter for a freebie and monthly updates.

Take your options to win one of 6 international ebook copies of Nine Ladies in the rafflecopter widget below! The giveaway ends on  February 13.

Thanks so much for hosting me and Nine Ladies Maria!

Welcome back to My Jane Austen Book Club, Heather, and fingers crossed for you and Nine Ladies!

The story seems to hold everything i like, p&p, some secrets and a dash of magic! I have multiple other books on the story of darcy and lizzy and this could be a nice addition. So when i read about the give away i had to try!

Thank you for the excerpt. I guess since Lizzy is not in that century, Mr Darcy never had the will/desire to marry. Excited how it will be with these modern Lizzy coming to his time

With the appearance of Elizabeth in the 19th century, I'm hoping that she will stay and change the course of history. Mr Darcy dying without ever finding his true love is kinda depressing for me.