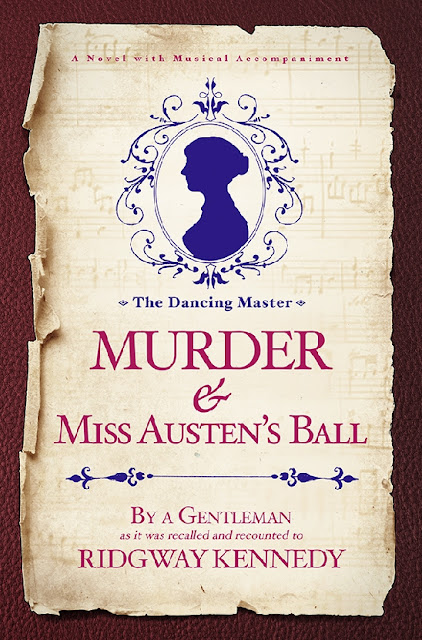 Murder & Miss Austen’s Ball is a product of a wide range of influences. I am a dance caller; a reader of Austen, Dickens, Scott, cozy mysteries, “women’s literature”, nautical fiction and more; and an independent publisher. Oh, and I earned a living as a writer for most of my working life—newspapers, advertising, PR, technical writing—but I’d never written a novel until now.

The seeds for the story might have been planted during a trip to England when—one day—we visited Jane’s cottage in Chawton and then drove to Portsmouth to tour the HMS Victory. If one reads the story, the connection between the two will be clear. A later trip to the UK and a visit to Abbotsford furthered the project in my mind. Then, maybe, there was Austin Kleon’s admonition: Write the book you want to read. So I did. And I’d like to share it with you.

Here’s an excerpt. It’s early on. Mr Freddie Worth, a former navy man who was put ashore when his hand was injured, is standing in front of Chawton Cottage. He is an accomplished fiddler and he is learning the craft of teaching and leading dances. He has been sent by his mentor, a Mr Thomas Wilson of London, to respond to a request for the assistance of a dancing master.

Here’s what happens next.

Standing under a small portico that protected the front door, Worth found a porcelain knob fastened to a fine chain and pulled it gently. A small, mellow bell sounded on the other side of the door. A perfect D, he thought. Neither sharp nor flat. Pleasant.

The substantial brick house stood on the north side of the Winchester Road, about one and a half miles from his lodgings in Alton. With his instrument slung over his shoulder, he travelled lightly. Sunshine, mild weather; it had been a pleasant walk, but he remained uncertain about the reception he would receive.

A maid came to the door and greeted him skeptically.

“I’m answering a summons from Miss Austen,” he said. “She sent an inquiry to Mr Wilson.” He withdrew a letter from his coat pocket.

The maid still looked suspicious, but recognizing the familiar hand, she allowed the visitor to enter and took the stairs up.

Worth surveyed the tidy parlor. It looks, in some ways, like a library , he thought.

Several books rested on tables, one upon a chair, and another upon on the settee. He saw place markers in a few of them. On the interior wall that formed a right angle with the front of the house, there stood a large bookcase—nearly full.

He noted the duplicates of some editions. Two sets of the three-volume novel Sense and Sensibility sat next to two more three-deckers of Pride and Prejudice. On the bottom shelf—he counted them off with surprise—no fewer than five sets of the volumes for Mansfield Park.

Worth knew the books well. Musicians frequently had long, quiet times between engagements; time for reading. As a musician who must engage with his patrons, for the most part ladies, he had no end of reading recommendations and offerings of book loans. He had even subscribed to a circulating library for a time. He knew the works of Mrs Radcliffe, Charlotte Lennox and, of course, the poetry of Lord Byron and Mr Scott.

A square pianoforte against the wall opposite the door spoke of music in the house. A classical score, a challenging piece and not some mere etude, occupied the music stand. The musician or musicians in the house possessed most respectable skills.

The maid descended the stairs and exited through a rear door of the house. Then, the lady herself appeared.

“Miss Austen,” Worth said with an appropriate bow.

She was of medium height, wearing a lace trimmed morning gown, and approached him with a puzzled expression.

“Worth, ma’am. Freddy Worth. But,” he added quickly, “I am here at the urging of Mr Wilson. You see—”

“Aye, Miss Austen. Now, of course, in your letter you asked for him, but as it approaches the holidays, he’s extremely busy. So, he asked me to come in his stead.”

Worth’s speech was cut off as another person entered through the back door of the house, closing the door with a brisk kick from a large boot. Looking more closely, Worth thought she was a woman.

“Flora told me you had arrived.”

The removal of an oversized hat and man’s greatcoat revealed a shorter and slighter lady, dressed in a well-worn frock and a mud-spattered apron. As she kicked off the oversized boots and discarded her apron, hair tumbled around her face.

“I see it now,” said the lady who had come down the stairs. “You are expected by my sister, Miss Jane Austen.”

“Good day,” the new arrival said as she stepped into slippers. “So nice to meet you. I have heard such wonderful reports about your assemblies in Town. It is so very kind of you to travel all this way.”

She spoke quickly, in a cheerful soprano. She tucked her hair under a white, lace-trimmed cap.

“You have met my sister, Miss Cassandra Austen,” she said. “I am Miss Jane Austen.” She approached Worth and dropped a polite curtsy. He bowed. “Now, shall we have some tea and discuss our business?”

“Yes,” Jane replied. “Very important business, and no, I have not discussed it with you.”

She spoke to her sister with the mixture defiance and humor.

“Mr Wilson,” she said with an air of confidentiality, “being the little sister can be such a trial.”

“Then, little sister,” Cassandra said, “you will surely want to know that this is not Mr Wilson.”

“Worth, ma’am. I am called Freddy Worth. And I am…ah…well…Mr Wilson, y’see…like I said, he’s a wee bit busy and he asked me t’ take his place.”

“Well now,” Jane said. “I am not at all certain this will do. And now the truth is revealed, I am also quite sure that you do not sound very much like a proper dancing master.”

“I am planning a ball, Cass. For my birthday. I shall be forty years upon the earth and descend permanently into spinsterhood. I am decided that before I am so resigned, I shall have a ball.

With her 40th birthday approaching and with three well-received novels in hand, Miss Jane Austen determines that she will host a ball. She has her reasons – quite sensible reasons. With the end of the war, the nation is in economic turmoil and, close to home, her brother’s bank is in distress. She has gained confidence and sees a way to gain her own means and independence.

A dancing master is sent for; a dancing master arrives. There is confusion, music, a literary rescue mission, a murder, a mystery and a puzzle that must be solved; even if the quest flies in the face of propriety. A mousetrap is set; it captures the wrong prey. Honor must be served, even if it involves headlong flight. And a mystery must be unraveled, even if it involves dark secrets.

Check the book at Amazon

One unusual aspect of the story is the degree to which music and dance pervade its telling. The act of playing music together brings people into a special kind of intimate relationship. The story weaves in scenes of dance preparations, making music, teaching dancing and provides an inside look at a ball from the musicians’ and dance leader’s perspective. One scene follows a couple down the set through a longways dance.

A line on the cover promises “a novel with musical accompaniment” as we plan to provide readers with “audio illustrations” – online access to custom tracks that will be recorded to go along with the book. Some e-readers may even be able to click and hear the music. Most of the melodies will be tunes Miss Austen might have heard, danced to and even played. But there is one newly composed melody—The Dancing Master’s New Tune we’ll call it for now—that takes a prominent place in the tale. 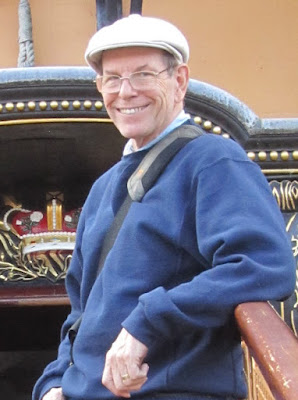 About the Author: Ridge Kennedy’s day jobs have included set designer, university professor, newspaper reporter, tech writer, publisher, advertising/PR guy, IT specialist and more. His involvement in folk music began during the Great Folk Scare of the 1960s as a song leader. “I always wanted to grow up to be Pete Seeger,” he says. After discovering the world of traditional American and English Country Dance, he became a dance caller and has been the “dancing master” at hundreds of contra, square, English and other dances around the US. For more information visit www.ridgekennedy.com . Murder & Miss Austen’s Ball is his first novel.

That’s a lovely excerpt! Best wishes on your debt, Ridge!

Debut! On your debut! ;) silly autocorrect

I remember going to a wedding where there was a musician teaching the dances to us all. It was a lot of fun

I love music - this sounds like a perfect match!