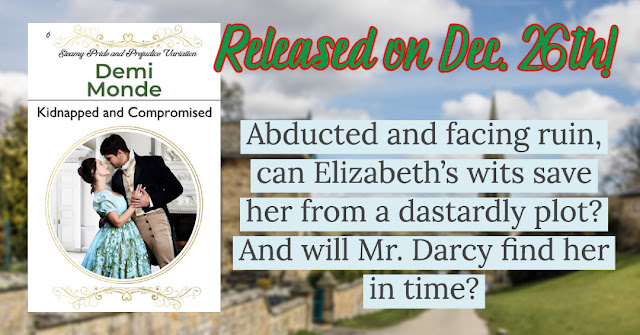 Hello Dear Readers, my name is Demi Monde and it is a pleasure to be here at My Jane Austen Book Club to share more details about my new release, Kidnapped and Compromised. This is a steamy novella and a work of Austenesque fiction.

Abducted and facing ruin, can Elizabeth's wits save her from a dastardly plot? And will Mr. Darcy find her in time?

When a false friend tricks Elizabeth, she is abducted by carriage from Meryton and carried hours away to a bawdy house. If Mr. Darcy does not rescue and pay her ransom, she will be sold to the highest bidder.

Elizabeth must depend on her wits to survive. But the clock is ticking. Will Mr. Darcy choose to risk his life for the woman he secretly loves but who despises him? And if so, can he rescue her before it's too late? Enter to win a copy of Kidnapped and Compromised! Five winners will be drawn on December 27th.

This book opens near the beginning of Pride and Prejudice, with the militia present in Meryton and Elizabeth Bennet’s opinion of Mr. Darcy set, no matter his opinion of her fine eyes.

Mr. Darcy pulled the reins, bringing his horse to a standstill from cantering, and looked around the Hertfordshire countryside. He thought he had heard yelling. But all he saw was an open field, crops in rows, with no one in sight. Fox pranced forward skittishly, no doubt unnerved by his rider’s stillness.

He had definitely heard it this time, over the sound of the horse’s hooves churning the damp earth underfoot. He had not imagined the voices calling for the desirable yet impertinent Elizabeth Bennet. Though she had believed Wickham’s stories about him, and questioned him at the Netherfield ball, he still admired her intelligence and beauty. But he could not have what he wanted. Her social connections and her family’s impropriety would never allow him to be with her in society or even to call on her in Hertfordshire.

He fingered the smooth leather reins as he decided whether to give in to his desire to find the cause of the servants yelling for the Bennet girl or to avoid temptation. The more he was close to her, the harder it was to not speak to her, to make her notice him, to have her admire him.

Mr. Darcy nudged his chestnut stallion Fox with his heels and headed towards the figures near the forest. Any gentleman would offer assistance in this situation. And Miss Bingley was not here to tease him for paying too much attention to Elizabeth’s fine eyes.

“You there!” He spied a servant walking at the edge of the woodland. “What is the matter?”

The man pulled at his forelock. “Miss Elizabeth Bennet has not returned from her walk.”

Mr. Darcy had heard of her odd habit of lengthy, daily walks and had seen it for himself when she had hiked three miles to Netherfield to care for her sister. “Surely she cannot be lost? Has she not walked all over this countryside?”

The older man nodded. “Yes sir, but she—”

“How long has she been missing? What is being done to find her?” Mr. Darcy’s horse shook his head and pawed at the ground, eager to return to cantering.

“Miss Elizabeth has been gone since right after the noon meal, sir. Mr. Bennet has all the servants out looking for her.”

Mr. Darcy frowned. That was nearly five hours ago. Even a country girl with a fondness for countryside rambles would have returned by now. His chest clenched at the thought of her injured on the ground, somewhere at the mercy of the local wildlife. “How many are searching for Miss Bennet? Is anyone on horseback? What is her usual walking path?”

The servant looked back towards Longbourn, the home of the Bennet family. “I do not know, sir. Mr. Bennet is at Longbourn and would answer your questions.”

Mr. Darcy spun his horse and kicked him into a canter. He searched the ground for a beautiful young woman lying injured as he rode. She must have twisted her ankle and was too far away to be heard yelling for help.

It was unconscionable that the Bennet girl was allowed to walk without a maid. Never would he have permitted his sister Georgiana to do the same. Perhaps Mr. Bennet would be more circumspect after this. However, Mr. Darcy doubted it. Control over his family was not one of Mr. Bennet’s strong suits, not with the way his younger daughters behaved at the assemblies or in town, flirting with the officers.

Mr. Darcy guided his horse down the short driveway of Longbourn.

Mr. Bennet looked up at the sound of Fox’s hooves clattering on the gravel path. The family’s patriarch stood in front of the house, directing searchers in his greatcoat and hat. Mr. Bennet turned in Mr. Darcy’s direction.

“Mr. Bennet, I came across one of your servants looking for Miss Elizabeth. May I offer my assistance?”

Mr. Bennet grimaced. “It would be much appreciated Mr. Darcy. However, I am sure my dear Lizzy has just lost track of the time. I have tried to curtail her long walks, but she will not listen to me.”

He chuckled, most likely expecting Mr. Darcy to join in. But Mr. Darcy’s thoughts were far from amused as his opinion of the Bennet patriarch dropped lower. “Men on horseback could cover a greater distance. I am certain Mr. Bingley would provide his servants to help with the search.”

Mr. Bennet widened his stance as he looked up at the younger man who outranked him in every manner. “I thank you for your offer; nonetheless I am sure we will find her quite soon. There is no need to cause alarm among our friends and neighbors.”

Mr. Darcy gathered the reins, biting back the desire to tell Mr. Bennet that a proper search had not been done. He turned, giving his horse the signal to move away from the man and his doddering ways. The eldest two Bennet girls deserved all the credit for their characters. It was a shame they came from such a family.

A young maid darted out from behind the hedgerows lining the lane. Fox reared back in surprise, but Mr. Darcy quickly brought him under control. He turned to the girl, ready to lecture her on not startling horses.

“Oh, Mr. Darcy! I have a note for you. I was going to give it to Mr. Bennet, but since you are here…” She held the stationary up to him.

He plucked it out of her hand with a scowl. It could not be a message from Netherfield. Mr. Bingley would not have sent a young maid alone to find him. “Who is this from?”

“A man in Meryton asked me to give this to you.” The girl gripped her waist, breathing heavily.

He unfolded and read the note, his heart stopping. Mr. Darcy pinned the servant girl with his stare. “How long ago did you receive this? Did you recognize the man that gave it to you?”

Mr. Darcy turned his head away to think. The maid curtsied and started towards the house.

She stopped and looked back, clutching her apron.

“Do not tell anyone. Miss Elizabeth’s reputation is at stake.”

The servant assured him of her silence and continued down the driveway to Longbourn. Mr. Darcy lifted the reins, intending to race to Netherfield and round up his friend Mr. Bingley and servants, but stopped. It was his fault entirely that the honor of Elizabeth Bennet was at risk. The fewer people that knew of this situation, the better.

I hope I have piqued your interest.

The book is available for pre-order

Not liking Mr Bennet more!!! Not sure why the little girl thought Mr D is better to get the note than Mr. B. Is she an accomplice or was Wickham in the area to see Mr D was in Longbourn area?

Hope Lizzy is well despite circumstance. Abduction stories give me chill more than horror stories

Looking forward to reading this story.