BLOG TOUR, A PROMISE OF FOREVER BY CHRISTINE COMBE

Thank you for having me, Maria Grazia — I am so very happy to be stopping by today.

Greetings fellow Austenians, and welcome to the first day of my blog tour! I am very excited to be visiting My Jane Austen Book Club once again to talk about a new book. Available on Amazon starting today is A Promise of Forever, my second standalone Austen variation. This book is the fourth JAFF novel I’ve published since I began in the genre in 2018, and I really hope you’ll like it as much as I’ve enjoyed writing it.

Time for the cover reveal! 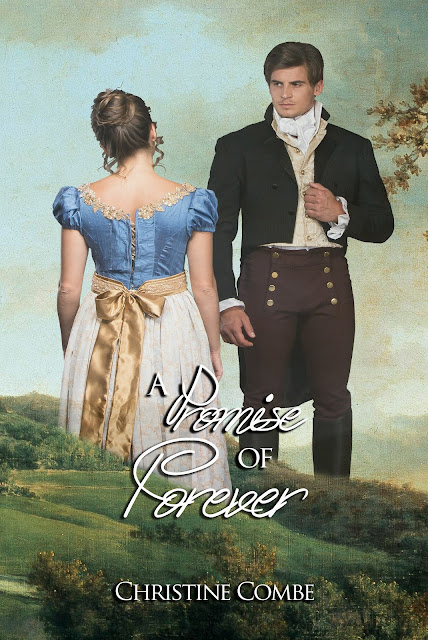 Isn’t it lovely?! Now, about the story…

In this new Austenesque tale, Mr. and Mrs. Gardiner are Elizabeth’s parents and she grows up happy and carefree in Lambton. At sixteen, Lizzy meets and falls in love with Fitzwilliam Darcy, future Master of Pemberley. The couple decides to elope but they are torn apart by their closest relatives, and when reunited must determine whether the pain of the years that have passed can be overcome to regain the love that was lost.

Now, to further intrigue you, here’s the opening scene of chapter one:

Fitzwilliam Darcy had no idea his return home after a year-long tour of the Continent would lead to his falling in love.

It was an imprudent love—one his father would label an infatuation. He was a young man just two years over his majority, and the girl a pretty little thing with fine, dark eyes and a ready smile.

Darcy saw much more than that in Elizabeth Gardiner. She was also intelligent and witty, and when they became further acquainted, she was not afraid to tease him on the rare occasion they were alone together. He found her self-confidence and vivacity refreshing, and a very welcome change from the society debutantes whose company he had been forced too often to endure by his parents or noble relations. It was hard enough to overcome the awkwardness he felt when pressed to attend social functions where he was surrounded by strangers, but young ladies simpering behind their fans—when not offering coy smiles or batting eyelashes—made it exceptionally difficult to determine whether they sought his company because they liked him, or because their parents liked the connection to his family a marriage would afford.

Elizabeth didn’t care about any of that; she judged a person based on who they were, not what they had. She well understood her station in life—she was the daughter of a respected tradesman, whose charm and amiable character had prompted his mother to offer her the position of companion to Darcy’s much younger sister, Georgiana. She also well understood his place in society—it was their differences that had, at first, kept her from accepting his overtures of friendship after they had been introduced. Multiple times she had reminded him that “the heir to a great estate does not purposely keep company with a servant in his house” even though she was not, technically, a servant. Darcy knew this well enough to not need the reminder, but when every attempt to remove her from his thoughts utterly failed, he came to recognize that her resistance to his efforts, her indifference to those charms which generally drew attention to him, were a great part of what attracted him to her.

That, and the very great pleasure which a pair of fine eyes in the face of a pretty woman could bestow. Darcy felt he could never get enough of looking into those eyes.

Eventually, the sixteen-year-old Elizabeth began to warm to him, and the greater part of the summer was spent in trying to find time to be together out from under the watchful eyes of his parents, her parents, or the servants. He enjoyed not only gazing upon her lovely face but also stimulating her mind in the way she stimulated his. They shared a passion for reading, and often their discussions were over what books each had read. If one had read a book the other had not, the title was recommended and on their next meeting, they would discuss it. Other shared interests were philosophy and art, and they both liked music. Little opportunity existed to enjoy it at the same time lest they both attended one of his sister’s lessons or sat to listen to her practice—both agreed that Georgiana was exceptionally gifted at the pianoforte.

It was a late evening, during stolen time under an old willow tree, when Darcy—after passionately kissing Elizabeth—asked her to marry him.

Sitting back from him, she stared with wide eyes. “You cannot mean it, Fitzwilliam.”

“Indeed, I am in earnest,” he replied. “I want you for my wife, Elizabeth. I want you to be the mother of my children—we will fill Pemberley’s halls with children!”

Elizabeth smiled. “I should like that very much, my love. But what of your parents? Your uncle the earl? What will they say when you tell them your choice of bride is your sister’s paid companion?”

Darcy just stopped himself saying he didn’t care what they thought. The truth was, he did—the approval of his family was very important to him. But against all common sense, he had fallen in love with a girl below his station—and really, was not his happiness more important than her lack of fortune?

His momentary silence led to the fall of Elizabeth’s happy countenance. “Oh, Fitzwilliam,” said she as she took his hand in hers. “I know why you do not speak—they would never consent, your family. A match between us is beyond imprudent.”

She looked away, and he heard her sniffle. “What fools we have been to allow ourselves to indulge in fantasy.”

When a tear slid down her alabaster cheek, Darcy shook free of his reverie and reached for her. Almost crushing her to his chest, he stroked her hair as she quietly sobbed at his shoulder.

“Dearest, loveliest Elizabeth, I will find a way for us to be together,” he said into her hair. “I promise you, I will think of something.”

The dice is cast! Tell me what you think in the comments below, and enter for a chance to win an ebook copy of A Promise of Forever, available for purchase from Amazon on Kindle — also in paperback and hardcover! 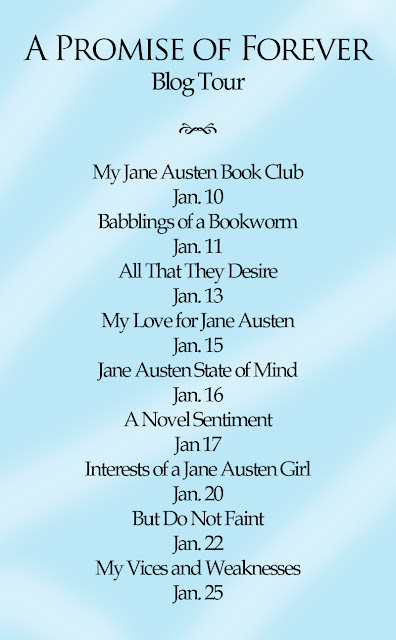 Christine, like many a JAFF author before her, is a long-time admirer of Jane Austen‘s work, and she hopes that her alternate versions are as enjoyable as the originals. She has plans to one day visit England and take a tour of all the grand country estates which have featured in film adaptations, and often dreams of owning one. Christine lives in Ohio and is already at work on her next book.

Congratulations on the new release, Christine!

Congratz on the release! I am looking forward to reading your new book.
The drama cometh!! lol

It is so very different that they have known each other for a long time. I like the premise of the book. Thank you for the excerpt and giveaway.

What an interesting premise. The cover is lovely, congrats on the release!

Congratulations to Christine on the new release! I read this as a WIP and enjoyed this story very much. I cannot wait to read the final version. Thanks for the chance in the giveaway.