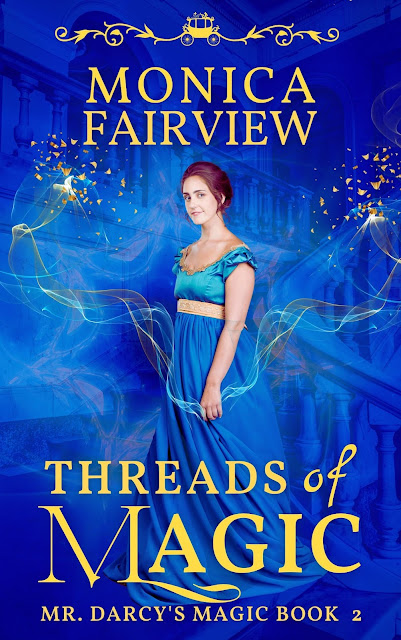 Hello and welcome back to My Jane Austen Book Club, Monica! And we are very glad to welcome back our favourite Austen-inspired mage, your Mr Darcy, of course.

Thank you, Maria. It is such a pleasure to visit your blog again. Answering your interview questions has become a familiar ritual that I look forward to when I have a new book. I hope my readers enjoy these interviews as much as I do.

Threads of Magic is Book 2 in your Mr Darcy’s Magic series. Have you planned it as a trilogy or as a longer series?  Can this book be read as a standalone?

‘Threads of Magic’ can be read as a standalone in the sense that it's a complete novel without cliffhangers, but to follow the development of Darcy and Elizabeth’s relationship, it might make the journey more enjoyable to start with Dangerous Magic (Book 1). For the moment, I am working on Book 3. I do have plans to continue beyond that, but I can’t make a final decision until I’m further along in the WIP. I do want to wrap up their relationship in Book 3, but I would also like Elizabeth and Darcy to face more adventures together after that.

Apparently, in your Regency magic world, our dear Elizabeth Bennet is really in danger. What’s she done? What enemies has she made?

She is definitely in danger throughout the novel. A big part of the storyline is trying to figure out where the danger is coming from. They are at war with Napoleon, of course, but is there a traitor in their midst?

Elizabeth is bringing new forms of magic to an old institution that has existed hundreds of years. As you would expect, the Royal Mages are suspicious of her. While she might be able to get Darcy to change his ways, there are some people that are not going to welcome a powerful mage who is not only an outsider but comes from an inferior social standing.

Of course, Mr Darcy is ready to fight for her! What battles are ahead for him? Who are his antagonists?

Ah, that is a very difficult question to answer without giving away the plot. I think, like in ‘Pride and Prejudice’, where Darcy begins to question his assumptions after Elizabeth confronts him, Darcy in ‘Threads of Magic’ begins to see the Royal Mages through Elizabeth’s eyes. He has to deal with the members of the Council, of course.

He does fight for Elizabeth throughout, but he doesn’t always get things right. At this stage in the series, he still needs to work out what their relationship means. He needs to adapt.

I may have already asked but … what traits of the original Austen characters do your Elizabeth and Darcy still have?

Many of the original traits. In ‘Threads of Magic’, Darcy is still the original, arrogant Darcy to a large extent, though he can also be very tender. Like canon Darcy, he is willing to learn and change, but the process isn’t a magical, overnight transformation. ‘Threads of Magic’ takes place in just a few weeks, so Darcy still needs more time to change and develop. The relationship between him and Elizabeth will become much smoother in the next book, once he has learned from his mistakes. I am looking forward to that part. This is what the readers are waiting for as well, I imagine! 😉

Elizabeth is still a headstrong and obstinate young lady. She is still unconventional and likes to laugh. But she is struggling against an old, entrenched institution which is unopen to change, and at this stage in the series, she does have quite a lot to contend with, including Darcy’s sometimes blinkered ways of looking at the world. Elizabeth is very firm about what she wants and is very direct.

The fun aspect of writing a series is that you can give ODC plenty of time to work things out, though I imagine that readers may be impatient to see them resolve everything quickly!!

We have already profusely discussed you imagining your mage Darcy as Henry Cavill, but … what about Elizabeth?

Maybe because I had a Harry Potter watching marathon with my family over Christmas, and my novel has magic, I think Emily Watson would make a good Elizabeth Bennet. She is clever, she has that twinkle in her eye as well as a direct way of talking. I’m thinking of her in roles like Belle or in ‘Little Women’. I do think she was miscast in ‘Little Women’. But I can really imagine her in a production of ‘Pride and Prejudice’. She would be perfect in ‘Dangerous Magic’/’Threads of Magic’. Wouldn’t you agree?

I would also love to see an Elizabeth played by Jenna Coleman. She was cast as Lydia in ‘Death in Pemberley’, but I think she would have been better as Elizabeth. I think the show would have been more successful if Jenna played the lead role.

This choice may also have something to do with the fact that she plays Lydia alongside Matthew Goode, who plays the role of Matthew in ‘A Discovery of Witches’. I like the magic connection.

Well, my last question is, are you already at work on Book 3? When do you think it’ll be released?

I’m at the early stages of writing. I am the type of writer who takes her time to plot and plan. I can’t start the novel itself until I have everything straight in my head. The grand irony of this is that I never end up following the plan. My novels always surprise me with new directions I didn’t expect. This invariably means I have to rewrite the first half of the novel. One day I’ll have to try writing without pre-planning, just to see if that will actually work!

I plan to release Book 3 of Mr. Darcy’s Magic by the end of this year. 😊

As usual, thanks for being such a generous, kind guest, Monica. It’s been lovely to talk with you again!

In a magical Regency England, two powerful magicians strive to find a balance between love and duty as they confront enemies who might well be their closest friends.

Elizabeth Bennet may be a heroine, but by defying some of the most powerful mages in England, she has made enemies who will stop at nothing to embroil her in scandal.

So when she is accused of endangering the Royal Mages through her reckless actions, she no longer knows who to trust. Even the gentleman she loves is taking their side. It seems the only person who believes her is the captive French mage who is imprisoned in the cellar at Netherfield.

Meanwhile, Fitzwilliam Darcy is willing to fight to the death to defend Elizabeth, if only she would stop getting herself into trouble. Why does she always have to break the rules? And why does even her sister Jane cause him so many problems?

Join us in this magical Jane Austen Regency variation. Set mostly in Meryton, with familiar beloved characters from Pride and Prejudice, you will once again be enchanted by Elizabeth and Darcy’s struggle to find true love against the backdrop of England’s war with Napoleon.

Monica Fairview writes Jane Austen sequels and variations as well as Regencies. Her biggest claim to fame is living in Elizabeth Gaskell’s house in Manchester, long before the house was restored. After studying in the USA, she taught literature, then became an acupuncturist. She now lives near London.

Monica loves anything to do with the nineteenth century, and obsessively follows every period drama she can find. Some of her favorites are ‘North and South’, ‘Bright Star’, ‘War and Peace’, and a dozen others that she couldn’t possibly list here. Of course, she has watched Pride and Prejudice (1995 and 2005) more times than she could count on her hands and toes.

In addition to her love of Jane Austen, Monica enjoys reading fantasy and post-apocalyptic novels but avoids zombies like the plague. She loves to laugh, drink tea, and visit National Trust historic properties [If Covid allows it!], and she is convinced that her two cats can understand everything she says.

GIVEAWAY
a Rafflecopter giveaway
Posted by Maria Grazia at 09:00

I'm a fan of this series so look forward to reading this latest entry.

I enjoyed the interview. I agree that it would have been good to see Jenna Coleman playing Elizabeth rather than Lydia, I was disappointed at the time!

I love the idea of adding magic to the Regency.

Thank you for the interview and more insight into the story. I can imagine Emma Watson protratying this magical Elizabeth to perfection!

I recently listened to the audiobook of book 1 (again) to get ready for book 2. Am now reading it on kindle and am loving it!

I am eager to read it.

I have to day that I have loved both of these books in the series, although I would have never started the first one if I had known it was a series. I missed that somehow. I hate waiting for the next book in a series of books, even if the first is kind of wrapped up.

I 100% agree on the fact that the actress who played Lydia would have been a better person for Elizabeth in Death Comes to Pemberley. Their choice of people for both Darcy and Elizabeth was a hard one for me to swallow because neither came close to my vision of my favorite couple. Loved the rest of it, though.

I am waiting impatiently for the next in the series. Trudy

This is an excellent post I seen thanks to share it. It is really what I wanted to see hope in future you will continue for sharing such a excellent post.