BLOG TOUR - STEPHANIE BARRON, JANE AND THE YEAR WITHOUT A SUMMER 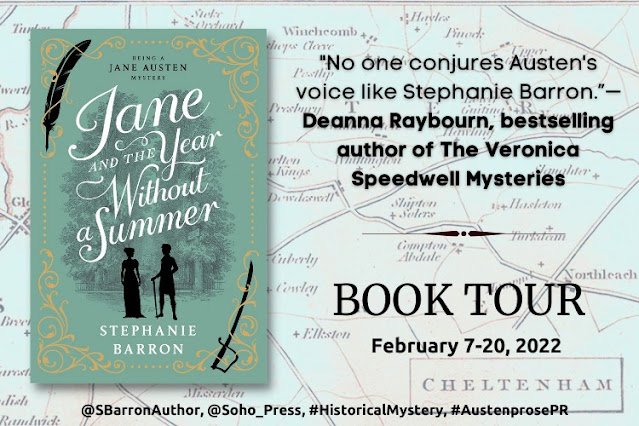 Hello and welcome to an incredible new blog tour, which I'm honoured to be part of! Stephanie Barron is the best-selling author of a fantastic series of Jane Austen mysteries, and these days her  Jane and the Year Without a Summer (Book 14) is out!  We have an exclusive excerpt to read and discuss here at My Jane Austen Book Club. Aren't you eager to scroll down and discover more?  Looking forward to your comments! 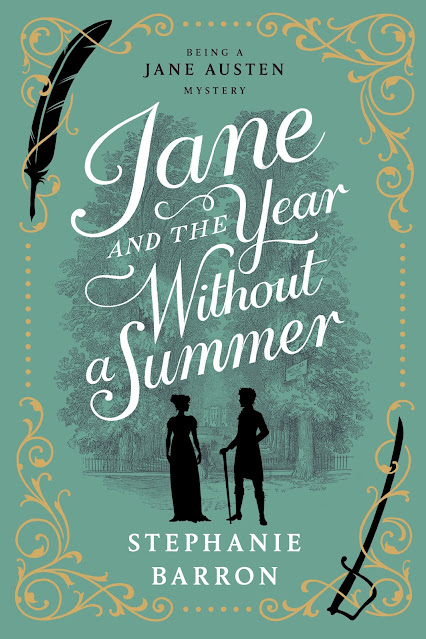 May 1816: Jane Austen is feeling unwell, with an uneasy stomach, constant fatigue, rashes, fevers and aches. She attributes her poor condition to the stress of family burdens, which even the drafting of her latest manuscript—about a baronet's daughter nursing a broken heart for a daring naval captain—cannot alleviate. Her apothecary recommends a trial of the curative waters at Cheltenham Spa, in Gloucestershire. Jane decides to use some of the profits earned from her last novel, Emma, and treat herself to a period of rest and reflection at the spa, in the company of her sister, Cassandra.
Cheltenham Spa hardly turns out to be the relaxing sojourn Jane and Cassandra envisaged, however. It is immediately obvious that other boarders at the guest house where the Misses Austen are staying have come to Cheltenham with stresses of their own—some of them deadly. But perhaps with Jane’s interference a terrible crime might be prevented. Set during the Year without a Summer, when the eruption of Mount Tambora in the South Pacific caused a volcanic winter that shrouded the entire planet for sixteen months, this fourteenth installment in Stephanie Barron’s critically acclaimed series brings a forgotten moment of Regency history to life.

Cassandra’s lips were pursed as tightly as a blighted rose. Her eyes swam with tears. As I studied her in trepidation, her throat convulsed and her countenance was suffused with disgust.

“It cannot be so dreadful, surely?” I attempted.

“Worse than your worst imaginings.” She set down her glass. “How can such a peculiar draught be everywhere proclaimed as an aid to health? The most blatant poison could not taste more vile!”

“Perhaps one grows accustomed to the flavour?”

“Only if one were to sample it repeatedly,” she retorted.

“And nothing could prevail upon me to do so—not even my most earnest wishes for your welfare.”

I studied my own glass doubtfully. The water it contained was as brown as the bottom of a horse’s tough. Cassandra and I had taken our doses quite meekly from the hands of Hannah Forty, a pumper who had ruled the Royal Well for as many years as her name suggested; but neither that woman’s challenging look nor the crowd of genteel patrons surrounding us had quelled my sister’s revulsion.

“This particular pump is said to be saline,” I observed.

“It cannot be worse than a mouthful of sea water, surely?”

“It is as sulfurous as a clutch of rotten eggs.”

“I must bespeak a cup of tea if I am not to retch this instant.”

I tossed the contents of my glass into a waste bowl and followed my sister further into the Long Room, the elegant saloon that housed the Royal Well’s pumps. Tho’ it was only half-past eight o’clock in the morning, a crowd of fashionable patrons strolled its length while the musicians ranged on the balcony overhead played a concerto by Beethoven. From the Long Room’s crush this morning, I concluded that half the Kingdom was come to the spa town determined to banish the humours from their blood, tho’ the end of May is still considered early in Cheltenham’s Season.

“We may discover the waters at Lord Sherborne’s Well or the Montpellier to be more to our taste,” I called after Cassandra.

“We might remove to either immediately. Neither is at a very great distance; I am persuaded neither is beyond our powers.”

“But what adventure, then, may we hope for tomorrow? Or the day after that?” my sister answered with a pitiable groan.

“Surely some of these delights may be put off to a later hour!”

If one is not to take the waters at a spa built for the purpose, one may at least enjoy the parade of those who do: elderly gentlemen bent over their canes, attempting to appear sprightly; groupings of young ladies newly come upon the town, and determined to go in white regardless of the mud everywhere in the streets; harassed mothers of unruly offspring, scandalising their neighbours with excessive spirits and noise. And then there are the invalids: propelled by companions or family, intent upon the salvation of lives overburdened merely with living. In Bath, these are legion; in Cheltenham, more common still. Novelty will always draw those hopeful of cure. Had I not traveled three days in pursuit of it myself?

“Do observe, Jane,” Cassandra whispered as she slipped her hand through my arm and drew me away from the teacups we had drained at one side of the Long Room.

“Such a pretty creature, and so young, too, to be wheeled in a Bath chair!” She was attempting not to stare openly at an interesting young lady, whose sweetness of countenance and modest air must draw every eye. Flawless skin, tho’ too wan and pallid; shadowed eyes of cornflower blue; guinea-gold curls trailing from a deliciously upturned poke bonnet, a frail figure handsomely gowned—and yet all confined to the basket-chair of an invalid’s conveyance. There was a thinness, a languor, that spoke of suffering gallantly borne. Such a picture, eloquent of Divine gifts and burdens equally bestowed, must inspire the most sympathetic concern! Little ripples of notice followed the lady’s progress down the room. Heads turned, and were as swiftly averted. I guessed her to be in the middle-twenties. Her companion, a dark-haired, sober lady in dull grey, propelled the chair with devoted attention, indifferent to the impertinences of strangers. An elder relation, perhaps? 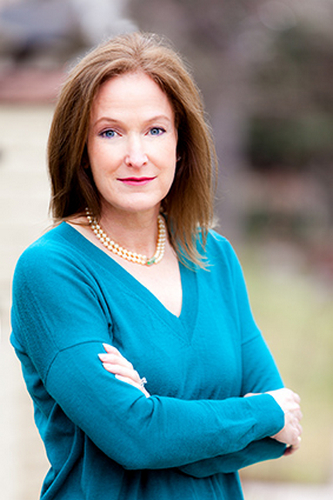 Francine Mathews was born in Binghamton, New York, the last of six girls. She attended Princeton and Stanford Universities, where she studied history, before going on to work as an intelligence analyst at the CIA. She wrote her first book in 1992 and left the Agency a year later. Since then, she has written twenty-five books, including five novels in the Merry Folger series (Death in the Off-Season, Death in Rough Water, Death in a Mood Indigo, Death in a Cold Hard Light, and Death on Nantucket) as well as the nationally bestselling Being a Jane Austen mystery series, which she writes under the penname, Stephanie Barron. She lives and works in Denver, Colorado.

Email ThisBlogThis!Share to TwitterShare to FacebookShare to Pinterest
Labels: Being a Jane Austen Mystery, Blog Tour, Jane and The Year Without a Summer, Jane Austen, mystery, Stephanie Barron, thriller

Thanks for sharing the excerpt, Maria. I have enjoyed all of the books in the Being a Jane Austen Mystery series. Jane and the Year was delightful. Barron channels Austen so convincingly. I am looking forward to the final book in the series.

Thanks for one marvelous posting! I truly enjoyed reading it, you might be a great author. I will make sure to bookmark your blog and will come back in the future. I want to encourage that you continue your great job.

We have a team of professional writers who know the nuances of the subject and can deliver you informative, plagiarism-free content on time. We work according to your deadlines and make sure you get the best grade in your class. End your search Australia Assignment Help with us.