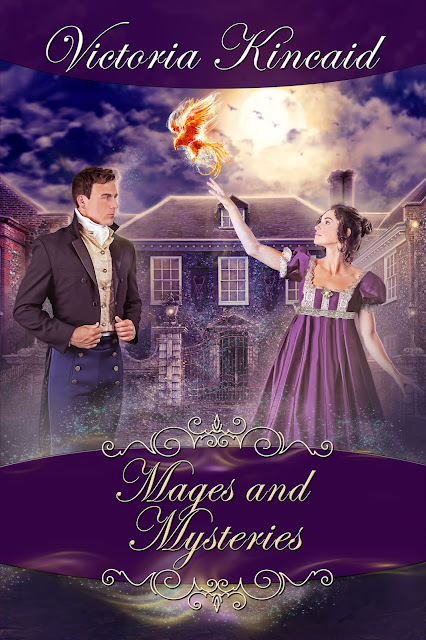 Thank you for having me as a guest!  Mages and Mysteries is my first fantasy Pride and Prejudice variation, and it was great fun adding magic to Elizabeth and Darcy’s story.  It gives them something in common but also another source of conflict.

Below is an excerpt from chapter two.  Elizabeth has just created an illusion that helped Darcy defeat a goblin that was trying to attack the Assembly Ball. Bingley had been fighting beside Darcy but was briefly knocked unconscious. Mr. Bennet was injured in the goblin’s initial attack. I hope you enjoy it!

In Regency England, women are expected to confine their magical acts to mending dresses or enhancing their beauty, but Elizabeth Bennet insists on crafting her own spells to fight goblins and protect the people of Meryton.  She even caused a scandal by applying for admission to the magical Academy. When Hertfordshire is beset with a series of unexplained goblin attacks, Elizabeth is quite ready to protect her family and friends. If only she didn’t have to deal with the attitude of the arrogant mage, Fitzwilliam Darcy.
Mr. Darcy doesn’t need to be associated with a scandalous woman like Elizabeth Bennet—no matter how attractive she is. But as the goblin attacks accelerate and grow more dangerous, Darcy realizes that he could use her help in identifying the cause—and is forced to recognize her magical ability.  Unfortunately, continued proximity to Elizabeth only heightens his attraction to her—which is particularly inconvenient in light of his engagement to Caroline Bingley.

Can Elizabeth and Darcy unravel the mystery of the goblin attacks before more people are hurt? And how can they manage their growing mutual attraction? It’s sure to be interesting…because when Darcy and Elizabeth come together, magic happens.

Mr. Darcy sheathed his sword, rendering it invisible once more and hastened to Mr. Bingley’s aid.

Elizabeth allowed herself to sink onto the bottom step, creating the illusion had required a lot of her energy. She shivered as the cold air penetrated her light ball gown. Servants ventured out of the hall. “We require a healer!” she shouted to the first man. “My father is injured!  We must take him inside the hall for the healer.” The man nodded his understanding and hurried back into the hall.

Mr. Bingley had managed to disentangle himself from the shrubbery, but he was moving rather stiffly as spoke to his friend: “I am fine, Darcy. I was just momentarily stunned.”  Still, Mr. Darcy took Mr. Bingley’s arm until he was satisfied his friend could walk unaided.

Pushing inky black curls away from his forehead, Mr. Darcy cast his gaze at Elizabeth. She gave him a smile; they had defeated a goblin together.  She rarely had a chance to use her magical talents for anything so meaningful.

He and Mr. Bingley carefully skirted the pile of ashes as they strode toward Elizabeth and her father. She clambered to her feet while her father remained propped up on the bottom step.  Mr. Darcy glanced down at him. “Mr. Bennet, my thanks for the timely intervention.”

Her father snorted a laugh, indicating his bloodied shirt. “You vastly overestimate my abilities if you believe I could create such a spell in my current state.” He threw a meaningful glance at Elizabeth.

“You cast it?” Mr. Darcy’s voice was thick with disbelief.

Elizabeth’s camaraderie with the paladins evaporated. She should be used to such a reaction, but it was still vexing. “I did. You are welcome.”

Mr. Darcy colored.  “Yes, of course, I thank you. But—How did you—? I have never witnessed a fully realized illusion on that scale.  Usually the large ones are quite flat and unrealistic.”

Elizabeth could not discern whether he was disapproving or admiring, not that it mattered.  She shrugged. “Many women are accomplished at minor illusion spells.” That was true enough. From a young age, girls were taught how to conceal a stain or rip in their dresses.  When they grew older, most women used a touch of illusion to conceal blemishes or make their cheeks a little rosier. “I have experimented in the past with making larger ones.”

“It is perfectly safe; nobody has ever been killed by an illusion,” Elizabeth said dryly.

“It was most extraordinary!” Mr. Bingley said with the false cheer of someone endeavoring to prevent an argument. “The level of detail was amazing, and the phoenix moved so fluidly.”

Elizabeth blushed a little at his praise. “I once convinced my mother that the chickens had invaded our drawing room.” Her father chuckled at the memory, and Mr. Bingley smiled.  Mr. Darcy’s expression was stony.

“I would never have prevailed upon you to risk your safety,” he said stiffly.

Elizabeth sighed inwardly. Could the man not simply say “thank you” and be done with it? “Fortunately for you, I did not wait for an invitation. I could not stand idly by and do nothing, Mr. Darcy—any more than you could have.”

He blinked several times. “I am a paladin.”

Elizabeth was tempted to laugh. “And I am someone who did not desire to see a paladin get mauled.”

The muscles in Mr. Darcy’s jaw tightened as if he tasted something extremely unpleasant.

“I am exceedingly grateful for your assistance,” Mr. Bingley said emphatically. “I shudder to think about the consequences if that creature had gained entrance to the hall.”

“Indeed. I wonder why it was so intent on reaching the hall.”

Two servants brought out a litter, and they gently transferred her father to it. One man told Elizabeth in soft tones that they had summoned the healer. Elizabeth watched the men carry her father up the steps and into the hall, preparing to follow them. But Mr. Darcy cleared his throat to gain her attention. “It was an unnecessary risk.” He scowled and crossed his arms over his chest. “You could have suffered magical depletion.”

Elizabeth rolled her eyes. She had certainly practiced magic long enough to recognize when she was reaching the limits of her energy. Between worry for her father and Mr. Darcy’s condescending attitude, her forbearance had frayed.  She smiled through gritted teeth. “What a shame I did not have a chance to study magic at the Academy. Then I might have high enough self-regard to be a real benefit to you.”

a Rafflecopter giveaway
Posted by Maria Grazia at 15:22

Definitely will need to read this as it sounds like one I would love.

I am looking forward to reading this! I love the premise!

Oh Darcy! Just be grateful and show Elizabeth how much you care. This is going to be a fun read. Thanks for the excerpt!

I love the idea of adding this kind of magic to the Pride and Prejudice story! It fits so well.
The excerpt is hilarious :)

A phoenix? How lovely. Really, it's a waste to relegate this magic to hiding torn dresses... Thank you!

Ooh, I hope that Lizzy got the last word there, because that is an excellent last word!

Enjoyed this excerpt, particularly the words exchanged between Mr D and Elizabeth. I wonder what was going through Mr Darcy's mind. Thank you for the execrept and the giveaway