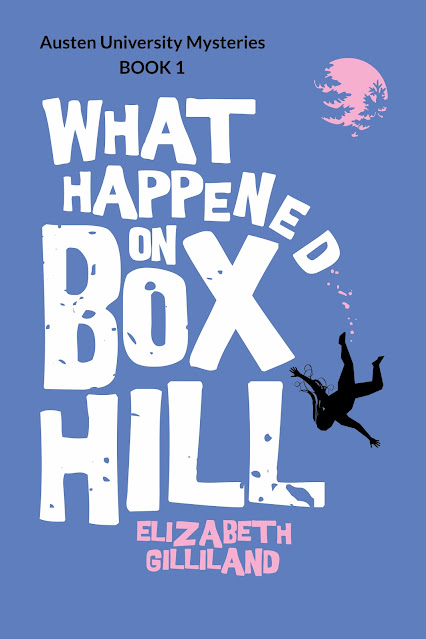 Thank you so much for having me, Maria Grazia!  Hello to all the readers of My Jane Austen Book Club! I have been loving getting to be a part of so many wonderful Jane Austen book review blogs and getting to meet fellow Austen fans. Feel free to say hi in the comments, and make sure to look out for the giveaway below!

What exactly is What Happened on Box Hill?

What Happened on Box Hill is the first in the Austen University Mystery series. It puts all of Jane Austen’s characters together into one modern-day setting–a small university in the American South called Austen University. What Happened on Box Hill will be Book One of a planned three-book series, and each book will combine the plot points of two of Austen’s novels and add in a brand-new mystery.

In What Happened on Box Hill, that mystery centers around Isabella Thorpe, who falls to her death on the night of Initiation into the Pi Kappa Sigma sorority. Her roommate, Caty Morland, becomes convinced that Isabella didn’t fall; she was pushed, and Caty is determined to find out who did it. Inspired by her love of true crime and mysteries, Caty puts together a dinner party with all of her top suspects, including Darcy, Elizabeth Bennet, Karoline Bingley, Frank Churchill, Jane Fairfax, Emma Woodhouse, Marianne Dashwood, John Thorpe, Tilney, Rushworth, and Knightley. If Caty’s instincts are right, one of them is the murderer–and she’ll have to figure out a way to prove it before they strike again.

Out of all of Austen’s characters, why did you decide to make Catherine Morland/Caty the focus of your novel?

I think anyone who’s read Northanger Abbey would agree that Catherine Morland has the spirit of a detective! I feel a bit bad for Catherine, because so much of her story revolves around people telling her that she’s wrong and trying to convince her that she doesn’t understand things, when she actually understands quite a lot. She’s innocent to the ways of the world, but she’s also very observant and has good instincts about people overall (except for maybe Isabella, but I think we can attribute that to loneliness and needing good friends around her). 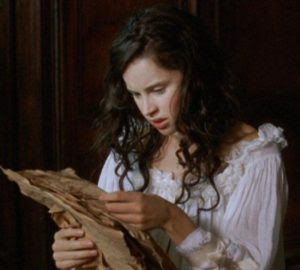 In my take, Catherine becomes Caty, and she still has a lot of the same qualities. She’s naive in some ways, but she also sees through a lot of the facades that people put up. She might not always understand the social context of what she’s seeing, but she sees through to the heart of people (for the most part. There might be one or two mistakes along the way…)

Will Caty be the POV-character for all the Austen University Mysteries?

Caty was an absolute blast to write, but the baton will be passed on in future books. I don’t want to give too much away because there are a lot of suspects at the dinner party who may or may not be the murderer, but one of the dinner party guests will take over in the second book. (You can read a sneak peek of the first chapter of Book Two at the end of Book One.) A third Austen heroine will take over for book three.

You can also sign up for Elizabeth's  newsletter for other sneak peeks, bonus scenes, and announcements of book release dates.

Of all of Jane Austen’s characters, who would you most want to be sitting next to at a dinner party?

What a terribly difficult question! I imagine Tilney would be a lot of fun to sit next to. As much as I love, say, Darcy or Wentworth, they don’t strike me as the best conversationalists at dinner. I would probably be too awed by Lizzy’s wit to say anything worthwhile, and although I find Elinor very clever, she would probably take a while to warm up and reveal her true self. Frank Churchill might be overwhelmingly charming, and Emma would probably hardly notice I was there. God bless Fanny Price, but no one wants to be seated next to her at dinner. So, yes, I’ll stick with Tilney.

What can we expect from What Happened on Box Hill?

Here’s an excerpt from when the guests/suspects first start arriving at the dinner party. (Just as a tiny bit of background, Emma has taken Caty under her wing as her protege and is helping her with the investigation):

On the evening of the party, the weather proved to be exceptionally accommodating, with blustering winds and the ominous rumble of thunder in the distance. It was just the sort of ambience one might have ordered for a murder-themed dinner party, though it was one of the few aspects of the evening that Emma had not carefully cultivated. Not even a Woodhouse could control the weather, though she would gladly take credit for the atmosphere it so helpfully created.

The first to arrive was Tilney, uncharacteristically early, and bearing a bottle of rum. For someone attending a dinner party that could at best be described as “suspiciously timed,” he seemed remarkably cheerful, in a way that might have even been deemed “ghoulish” in someone less charming. As it was, he gave Emma his most winsome smile as he handed over the beverage, looking over her shoulder to wink at Caty. “Ladies. I thought a dark liquor might set the tone.”

Emma looked less affronted by the callous treatment of Isabella’s death as some great adventure, than by the alcohol extended in her direction. “Kappa is a dry house,” she reminded him.

“Emma, darling, we’re breaking into Sorority Row during a university-wide shutdown to investigate our peers for murder. I think we’ve crossed that line.”

There was little arguing with that. Tilney swept past Emma, pausing in front of Caty. He lowered his voice a little, the enjoyment in his eyes diluted for a moment by real concern. “You doing all right, Veronica Mars?”

She managed a smile. “Holding up.”

He reached out, squeezing her forearm. “Go get ‘em, tiger.” Over his shoulder to Emma, “I’ll see myself into the dining room, shall I?”

When he was gone, Emma looked to Caty with a frown. “So, Tilney. He’s the one you—?”

Caty, quite unexpectedly, blushed. Even hardened murder detectives got a bit embarrassed about their crushes, it seemed. “Yeah.”

If you’d like to read more, you can find the prologue and first chapter here, buy the book here, or enter the giveaway for the chance to win 1 free e-copy.

What would happen if you combined all of Austen's characters into one modern-day novel?

When Caty Morland's roommate, Isabella, falls to her death on Initiation Night, Austen University is quick to cover up the scandal and call it a tragic accident. But avid true-crime lover Caty remains convinced that Isabella didn't fall; she was murdered. With the help of Pi Kappa Sigma President Emma Woodhouse, Caty organizes a dinner party with the most likely suspects, including familiar faces such as Darcy, Elizabeth Bennet, Knightley, and Marianne Dashwood. The theme of the night is murder, and Caty has three courses to find out what happened to Isabella—and to try to keep the killer from striking again.

What Happened on Box Hill is Book 1 of the Austen University Mysteries series. 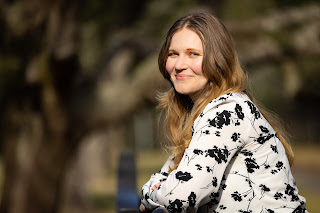 Elizabeth Gilliland is a writer, Dr., wife, mom, and lifelong Jane Austen fan. She is a playwright (whose plays have appeared off-off Broadway), a screenwriter (with a master's in screenwriting and production), an academic (with a PhD and a dissertation on Jane Austen adaptations), and now a published author! When she isn't writing or grading papers, she is most likely reading a good book, binge watching the latest hit, working on a puzzle, or hanging with her cute kid.

a Rafflecopter giveaway
Posted by Maria Grazia at 09:30

Thanks for having me, Maria! I hope people enjoy, and good luck with the giveaway! - Elizabeth

this is on my tbr

I can definitely see Catherine Morland as a modern student. Thanks for sharing an excerpt. All the best with this book.

I do enjoy moderns and love it when an author combines the characters of the JA universe. Congratulations.

Thank you for the excerpt.

Congratulations on your book. This is an enticing story , mystery with all our favorite JA characters.
Thankyou for the giveaway

The Austen University Mysteries is a fascinating series, Elizabeth. I cannot wait to learn who the murderer is what is his/her motive for wanting Isabella dead. I applaud your decision to select a different amateur detective for the second and third book.

Thank you for choosing me.
Teresa

Greetings to everyone  reading this testimony. I was rejected by my husband after three(3) years of marriage just because another woman had a spell on him and he left me and the kids home and moved in with the lady . one day I was reading articles about spell casters , I clicked this YouTube link https://youtu.be/kBvs5nQcjWo   and read how Dr Jumba helped a woman to get back her lover within 24 hours  and i gave him a reply to his address and he told me not to worry he will help me bring back  my husband and make him love me forever. I believed him and today I am glad to let you all know that Dr Jumba's powerful spell worked for me perfectly. i highly recommend Dr jumba for more information about Dr jumba below are his website and Facebook page . website :  https://drjumbaspellhome.wordpress.com .  Facebook :    https://www.facebook.com/Wicca-spell-tools-102869698481356

Awesome blog. I enjoyed reading your articles. This is truly a great read for me. I have bookmarked it and I am looking forward to reading new articles. Keep up the good work!