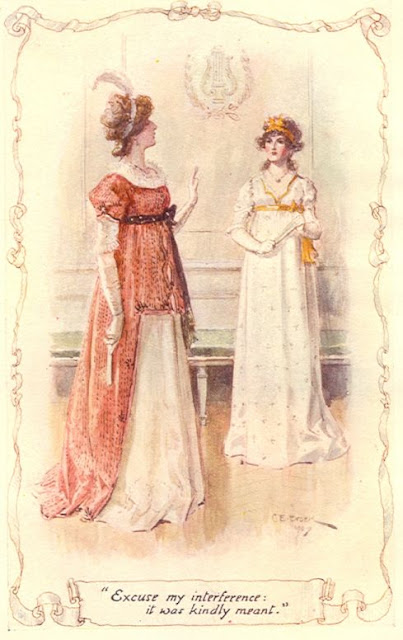 In my novel, Prideful & Persuaded, Caroline Bingley meets three Austen men in Bath: Sir Walter Elliot (Persuasion), Tom Bertram (Mansfield Park), and Frederick Tilney (Northanger Abbey). Two of these men are current or future baronets and all three have very wealthy estates. Is it reasonable for a lady like Caroline to think that men of this level of wealth and rank would marry her? If we set aside whether Darcy likes Caroline or not, did she have a chance with him in Pride & Prejudice? I will explore these questions using evidence from Jane Austen’s works.

Caroline Bingley is described in chapter four of Pride & Prejudice as well-educated, handsome, rich, and proud. Elizabeth reflects later that Caroline’s “powers of conversation were considerable (Ch 11)” and we also know that she is rather accomplished, no doubt due to her expensive education. We also know that her fortune originates in trade. Given this background, how well could she reasonably expect to marry? Was she aiming too high when she was flirting with Darcy?

First, the social consequences of being “in trade” seem to be much more nuanced than modern readers generally think. We know that Emma in the novel Emma is a snob, but she accepts Mr. Weston into her select circle. Mr. Weston “quitted the militia and engaged in trade (Ch 2).”He purchases his small estate, Randalls, and Emma visits him andis happy to see her former governess married to him.There may be multiple reasons that Emma allows Mr. Weston into her circle, either she believes he is the proper social class or she likes him and is using her influence to maintain his status among the first families.

As for Caroline, we do not know the family history of the Bingleys. It seems likely that the fortune was made a generation back, since we know their father could have purchased before he died. The Bingleys also might be from a gentleman’s family but like Mr. Weston, resorted at one time to trade. It only says, “respectable family (Ch 4)” without any additional context. Also, we know that the Bingleys are, “associating with people of rank (Ch 4)”which means that people of rank are allowing them into their society. It seems like the Bingley have made it in the eyes of the world, despite Charles having not yet purchased an estate. 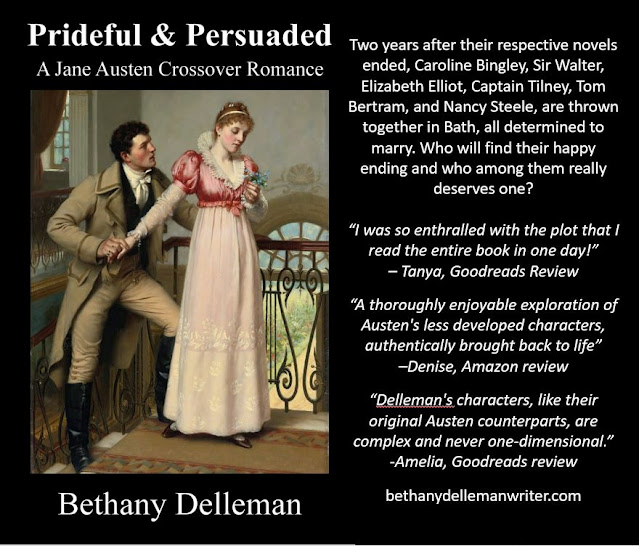 As for marriage, there are examples in Jane Austen’s works of wealthy gentlemen marring rich women from trade.In Sense &Sensibility, Mrs. Jennings is a vulgar woman from trade: “her husband, who had traded with success in a less elegant part of the town (Ch 25).” Mrs. Jennings has two daughters, one of whom has married Sir John Middleton, a baronet, and the other has married to Mr. Palmer, a gentleman of a good estate. Mr. Elliot in Persuasion, also marries a woman whose fortune was made in trade and he is a gentleman and the heir presumptive to a baronetcy.

These are undoubtably good marriages for the women and while we are not told what fortune the Jennings womenpossessed; we know for certain that their background is at least equivalent to Caroline’s. Lady Middleton also appears to be well-educated, as she did at one time play piano “for her ladyship had celebrated that event [her marriage] by giving up music, although by her mother’s account, she had played extremely well (Ch 7).”Mrs. Jennings’s daughters marrying so well is not presented as unusual in Sense & Sensibility.Jane Austen often explains unusual marriages, like that of Sir Thomas and Maria Ward (Lady Bertram) “Miss Maria Ward, of Huntingdon, with only seven thousand pounds, had the good luck to captivate Sir Thomas Bertram”(Ch 1) and Mr. Bennet’s marriage to Mrs. Bennet, “captivated by youth and beauty”(Ch 42). That Jane Austen does not explain Lady Middleton suggests that gentlemen marrying rich, beautiful women from trade was a normal thing in her society.

The reason, we must assume, that women from trade are acceptable to the gentry is because they are a source of wealth. Mansfield Park notes that ten thousand pounds gave one “any equitable claim” to a marrying a baronet. There are however additional claims to a good marriage that a woman can possess. When Mary Crawford arrives at Mansfield, her sister Mrs. Grant believes that she is equal to marrying Tom, the eldest son and heir:

“She had not waited her arrival to look out for a suitable match for her: she had fixed on Tom Bertram; the eldest son of a baronet was not too good for a girl of twenty thousand pounds, with all the elegance and accomplishments which Mrs. Grant foresaw in her (Ch 4)”

Now we can assume that as a good sister, Mrs. Grant has high hopes for Mary, but Mary acts as if this statement were true. Edmund also says later, “Miss Crawford may chuse her degree of wealth. She has only to fix on her number of thousands a year, and there can be no doubt of their coming. (Ch 22)” This source also is somewhat unreliable, because Edmund is worrying about how poor he is and how unlikely he is to attract Mary, but it does give an overall impression of what a well-educated, beautiful woman with twenty-thousand pounds can expect in marriage.

Caroline is not the daughter of a gentleman but she does have education, beauty, and a large fortune. Based on other marriages in Jane Austen’s novels it seems reasonable for Caroline to aspire to marry even as high as a baronet or a very wealthy gentleman like Darcy or Captain Tilney. 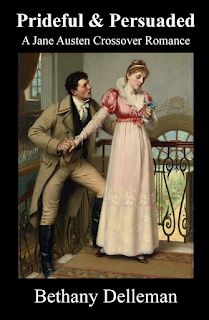 Prideful & Persuaded follows six minor and sometimes villainous Austen characters as they scheme and stumble towards marriage, each seeking their own vision of happily ever after. If, like Jane Austen, pictures of perfection make you sick and wicked, this is the novel for you!
In this playful, clean, Jane Austen-inspired crossover romance, Caroline Bingley (Pride & Prejudice) travels to Bath, determined to marry at last. She could never have imagined that three highly eligible men have each resolved to find a wife: Sir Walter Elliot (Persuasion), Major Frederick Tilney (Northanger Abbey), and Tom Bertram (Mansfield Park). With only Elizabeth Elliot (Persuasion) and Nancy Steele (Sense & Sensibility) standing between her and perfect happiness, who will Caroline choose?
Prideful & Persuaded at Amazon
ABOUT THE AUTHOR 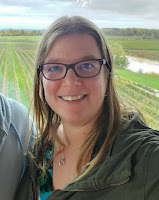 Bethany Delleman was introduced to Jane Austen when she saw Pride & Prejudice 2005 in high school. The book was purchased soon after and a new Jane Austen fan was born. She has been writing   since about fifteen and has recently released her first debut novel on Amazon. In Bethany’s other life, she has several published scientific papers in neuroscience and family medicine.

Bethany lives in Ontario, Canada with her husband, two sons, and a small menagerie of pets.
Bethany's Official Website

Congratulations on your first book!!! Eager to know the story of the other characters. It is a great cover. When I first saw the book (don't know what came to me), I thought the girl was reading a text in her phone. A few seconds, it seems I woke up and I thought duh... it is regency times (no cell phones yet). Anyway perfect cover to represent Caroline, ignoring a guy who is not rich or without a title or of the highest circle.

Thanks! She does look like she's looking at a phone. I saw this painting and immediately thought of Caroline.