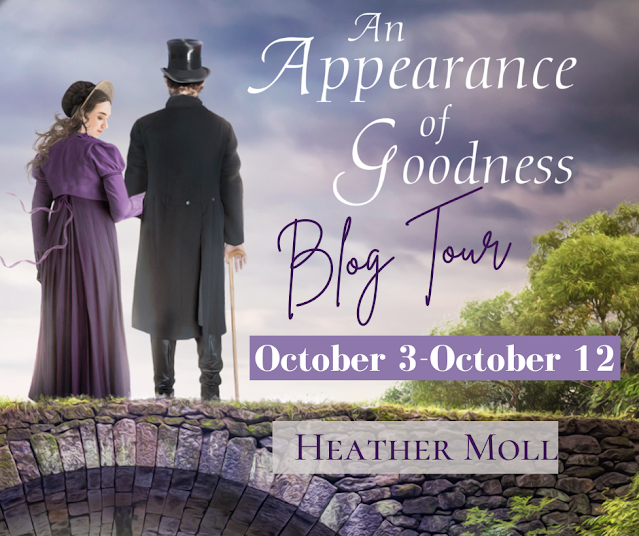 Thanks for the warm welcome back to My Jane Austen Book Club! I’ve loved mysteries since my mother handed me Nancy Drew and the Secret of the Old Clock when I was 9. Looking back, I’ve put elements that add to a good mystery in my other books, but An Appearance of Goodness is the first that could be called a mystery—even though it’s still firmly in the romance genre. Historical mysteries with slow burn romances are my faves, and that element is definitely in my latest release Pride and Prejudice variation.

In An Appearance of Goodness, Darcy is thrust into the role of amateur detective when the local magistrate beleives someone’s death was an accident, but Darcy fears someone at Pemberley committed murder. He’d much rather spend his time managing Pemberley’s flooding disaster and figuring out if Elizabeth loves him after all. And, of course, Elizabeth isn’t about to let him deal with a crisis on his own. 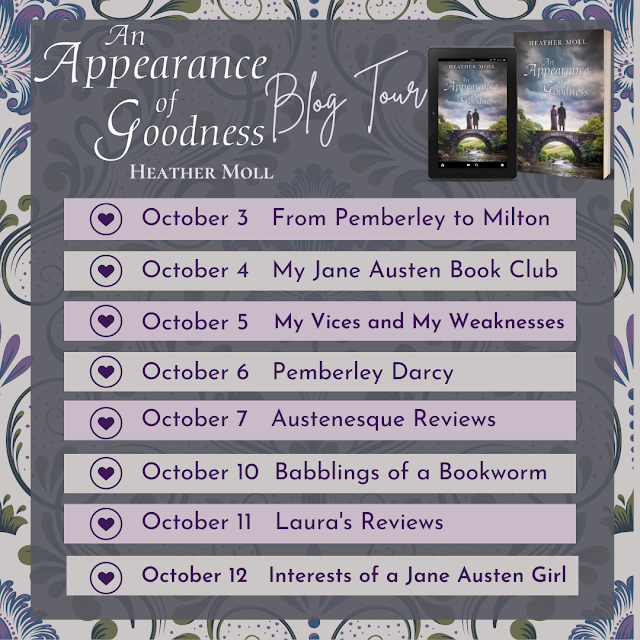 Here’s a scene where Darcy has learnt that the magistrate won’t investigate the mysterious death and Elizabeth it talking over the potential crime with him. Normally I would never do this, but I’ve redacted a character name and changed pronouns so you won’t know who the murder victim is until you read the book.

When Darcy finished and turned around, she asked, “You do not agree that it was an accident, do you?”

“I do not. The magistrate said that the candlestick is not conclusive reason to call an inquest, that there are other ways to explain it, and there is no indisputable evidence that a crime took place.”

“Then perhaps it was an accidental death,” she said weakly.

Darcy scoffed. “Mr Birch fears upheaval in the neighbourhood if thecoroner finds murder, but we have no witness and no suspect to accuse. He wants the parish to take it as a drowning like the others from the first storm to avoid a riot or a scapegoat being sent to the gallows.” He gave her an earnest look. “You saw how frayed everyone’s nerves are when you took notes at the Pemberley Arms, but how can that justify letting a potential crime be ignored?”

She ached to have something useful to tell him, but there was nothing.

He looked at the body. “I fear someone struck them, and they rolled into the water and drowned, or theywere struck dead as soon as the base of that taperstick touched them.”

“There is no proof,” she said gently, “and the magistrate has put an end to the matter.”

“There might be proof if there was an inquest,” he muttered. In a thoughtful voice, and still looking at the body, he said, “With no inquest to see if they have water in their lungs, let alone if theywere bruised from a struggle or if they were alive when they hit their head, we will never know.”

Elizabeth thought for a moment, and came nearer to the body, looking at the hands folded across the chest. “Have you ever seen women quarrelling over a man in the village square, or a woman defending herself from her ne’er-do-well husband?”

He gave her a confused look. “What?”

“Hair is pulled, faces are scratched, shins are kicked. Their clothes do not appear dishevelled. Look at their hands,” she said, pointing. “They are not scratched.”

Darcy nodded slowly. “They would not stand there and let someone hit them.” He sighed heavily. “Well, perhaps theywere not attacked after all and I am worried for nothing.” It was as though he wanted to convince himself the magistrate was right, and she did not want to take that hope from him.

“It is possible it was an accident,” she said, looking back at the body. She heard Darcy moving away as she looked at the folded hands. “Darcy, wait!”

Elizabeth realised her mistake after the name passed her lips. That he was surprised was evident, and she waited for the expected, the deserved polite correction to come. He came to her side, still not asking her to not address him so informally. She was about to apologise when he asked, “What is it?”

This brought her attention back to where it belonged. “Their ring is missing.” 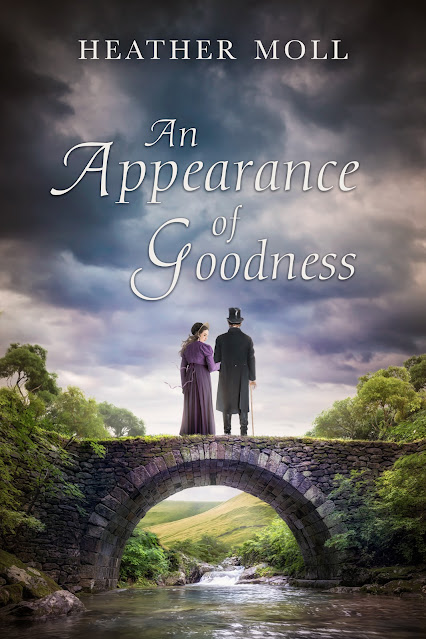 CAN A DERBYSHIRE MEETING LEAD TO LOVE OR WILL PEMBERLEY BE PLUNGED INTO MYSTERY?

In the rainy summer of 1812, Mr Darcy returns to Pemberley with a large party in the hopes that coming home will help him recover from the disappointment of his failed proposal. He lost Elizabeth Bennet’s good opinion, but Darcy did all he could to rectify his errors. Meanwhile, Elizabeth hopes that travelling with her newlywed sister and Bingley will raise her spirits and distract her from thoughts of Darcy. When a misunderstanding causes the Bingley party and Darcy’s to spend a fortnight together at Pemberley, both Elizabeth and Darcy wonder if the other could love them. When the season’s wet and cold weather causes flooding throughout Derbyshire, Darcy’s attention reluctantly shifts from his guests–and Elizabeth–to managing the tragedy. But when someone drowns and Darcy refuses to believe their death was an accident from the storm, he and Elizabeth must work together to uncover the truth before his houseguests leave, and before anyone else gets hurt. 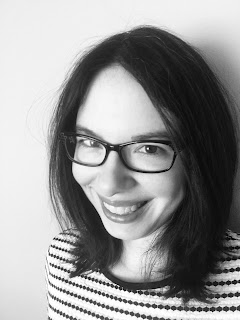 HEATHER MOLL is an avid reader of mysteries and biographies with a masters in information science. She found Jane Austen later than she should have and made up for lost time by devouring her letters and unpublished works, joining JASNA, and spending too much time researching the Regency era. She is the author of An Appearance of Goodness, An Affectionate Heart, Nine Ladies, Two More Days at Netherfield, and His Choice of a Wife. She lives with her husband and son and struggles to balance all of the important things, like whether or not to buy groceries or stay home and write.

Click on the link below to win a paper copy of the book and other swag!

Thank you so much for hosting An Appearance of Goodness today!

This is an interesting read, I would love to read more 🤗

Mystery and a love story!!! Thank you for hosting and sharing. (Buturot)

What a thrilling story, I have to know what happens next!!

AN APPEARANCE OF GOODNESS by HEATHER MOLL is such a master piece of her work. I always love to read her books. Now, it's time to get the services of Digital Consultancy click for more information.

The blogging skills you have, has been very helpful for the readers. You gave a great start in the blogging world. I have taken notice of your writing skills and will keep this in mind for further reading your upcoming blogs. Bella Feme