JOURNAL OF THE THIRD MEETING - PRIDE AND PREJUDICE 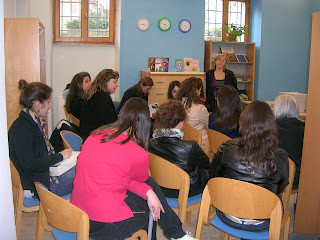 The third meeting was great. We had so much fun thanks to Jane Austen's  PRIDE AND PREJUDICE, its beautiful adaptations over the years and ... new acquisitions to our group: Antonella, Cristina, Simona and Valentina . They came from Rome to join us in the discussion of one of their favourite literary works  ever and the meeting was cheerful and amusing. We' just started discussing, actually! There is so much to be said yet ,  two hours are not enough for such an amazing novel.
Anyhow, something strange is haunting our meetings: each time the technological equipment of the library, which usually works, starts giving problems. Once is the TV and we have to use the computer, another time the DVD player and we have to use the computer... Today even the computer started giving problems... but we've made it as well. Only, I wonder, is it a message from Jane Austen herself? An invitation to read her books more than to watch the beautiful adaptations based on them? Maybe , who knows. But we are good girls: all of us  read or re-read Pride and Prejudice for our meeting today!


To open the discussion, after a very short introduction about the writing and the publication of the novel, we saw a clip (from Pride and Prejudice 2005 DVD, one of the extras in it). It was about dating in the 18th century and how different it was from nowadays for boys and girls to meet and have a date, the central role of balls, the absence of physical contacts.


Then we discussed
Before and after discussing the key moment of the first proposal, we also saw and compared the different performances in the 1940, 1980, 1995 and 2005 adaptations of P&P. This is a collage I made of the 4 different versions.


Then we went on comparing 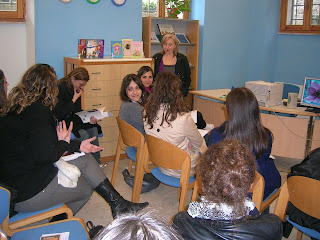 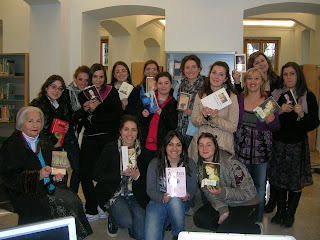 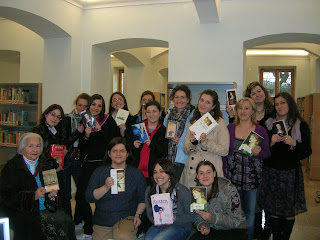 Thanks to Pina, Valentina L., Valentina M., Maria Francesca, Martina, Serena, Cecilia, Marika, Costanza, Simona, Elisabetta, Mara, Ludovica, Antonella and Cristina for the lovely afternoon. I'll wait for all of you again on April 10th to discuss our reading of  Mansfield Park.
Posted by Maria Grazia at 09:49

Oh MG, such a wonderful group of lovely ladies talking about P&P! I so envy you! I'm so glad that your meeting was another success and your friends from Rome mange to join you. Keep on the great fun and ...please arrange something in bath so I can come as well!!!! Baci. A.

@lunarossa
Actually, we have talked about a final trip to Jane Austen's places and we all would love it. Let's see if we manage to do it. We all work or study and it should be next summer. I'll keep you updated.Grazie, A. Ciao!

Oh, I've already told you I want to join the group! Ot at least to find a club like yours here... I wouldn't be so annoying talking about Austen if everybody liked it! It sounds as if it had been wonderful!

@Luciana
It really was Luciana! You are not annoying when writing about Austen on your blog. Your latest post was great. So, go on doing it ...and if you plan a trip to Italy by the end of June, we'll wait for you to discuss Mansfield Park ( Friday 30 April) Emma ( last Saturday in May) Persuasion (last Saturday in June).

It would be wonderful to know what your club made of the Bennets as parents - as there is quite a lot of dispute over which of the two parents is the worse parent - maybe they are equally bad?!

@Hanna
Well, actually there was a strenuous defence of Mrs Bennet by one of us, Antonella, but generally she was not considered a model mother by the rest of us. Not that she didn't love her daughters but, maybe she was rather self - focused sometimes or too often mono- thematic in her concerns (marriage). Antonella tried to find the reasons for such behaviour.
Nobody tried to defend Mr Bennet's absence in his daughters' education and life during the discussion. However, one of us chose him as her favourite character in the feedback survey. I can't tell who she is because the questionnaires were anonymous.
Thanks for commenting Hanna.

I loved watching all four versions of the proposal back to back! It's been a fabulous way to start my day.

@Alexa Adams
I'm glad you liked my collage. It's interesting to see how differently the same scene can be conveyed. Have a fabulous rest of the day!

Excellent post and video collage! I enjoyed it all! I have to say though I always feel a little disappointed in the proposal scene, because I feel like none of the Darcy's show the struggle or torment that he is feeling. I know Darcy is supposed to be reserved, but I would love to see some of his emotions come to the surface just a little bit!

Looks like P&P is the most favorite book in all aspects so far! I wonder if it will be dethroned after you read some of the otherS!

@Meredith
This is how Jane Austen saw her Darcy. Always extremely self-controlled. Pity isn't it?
And, yes, so far, JA's favourite novel seems to be P&P. I think it'll resist the challenge of this month book, Mansfield Park. But with Emma and Persuasion... who knows? It's unpredictable.
Thanks for dropping by and comment, Meredith!