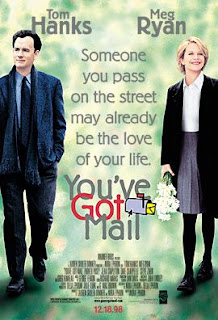 How many times have you watched this movie? Lots,  I bet. I just love it . First of all because, I must confess, the older I grow the more foolishly romantic I become! But dementia praecox symptoms apart, I truly love "You've got mail" because it is a film about books, or better , bookshops...and my dream job is to run a lovely little bookshop (or a big one) . Just because I'm fondly in  love with books. 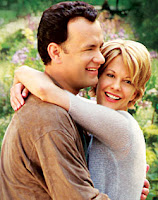 Then I  like this film also because it is set in New York. New York before the world changed, before the Twin Towers tragedy.
Are these  the only reasons to like "You've Got Mail"? I'm sure there are many others, among which the two brilliant protagonists, Meg Ryan  (Kathleen) and Tom Hanks (Joe).
But there's another - last but not least,  since we are on My Jane Austen Book Club - very special reason I have to love it:  it's its being Austenesque in many ways. This film is actually a transposition of Austen's Pride and Prejudice into romantic modern comedy. One of the many, but one of the loveliest.

Actually, at first I thought You’ve Got Mail seemed too artificial  and  cliched, and  the parallels seemed too thin, but as I 've re-watched it more than once,  I've come to like it more more and I was even moved at the closing scene (that kiss in the park so similar to the close of Emma 1996) .  I am  convinced  it has much in it that alludes to Austen in several different ways literally, thematically and through movie code.
The main points in the plot of P&P are there: the two protagonists' first encounters are spoilt by the woman's first impressions and prejudices against the man. He is wrongly seen as arrogant, domineering, selfish  and immediately refused as well as hated. What is different here is that the two protagonists  fall in love with each other in their parallel virtual life. They are twin souls on line, they send each other  kind sympathizing mails,but have a long series of rows in real life since they are rivals in business.  In their virtual lives they are free of their public roles, they are free to express their most hidden feelings in their  messages. Jane Austen's Pride and Prejudice is Kathleen's favourite book and a sort  of leitmotiv in the plot.

1. Kathleen runs a lovely small bookshop which is devoured  by the opening of a book megastore on the other side of the street.  Joe, the sensitive man she is fond of on line, is the manager of the company responsible of her financial troubles. Kathleen loves reading Pride and Prejudice, she has read it tens of times .  Well, she confesses she has read it 200 times! Joe accepts to go through Austen's pages for Kathleen's sake. What is so special in that book she likes so much? Watch the clip below.


2. Kate has a date with her mysterious lovely new friend  met on line.  Joe is there by chance ( not at all , actually!) and they discuss Pride and Prejudice… Watch the clip
3. Kathleen and Joe discuss about their relationship. Joe is convinced Kathleen has come to hate him since he has put her out of business, just like Elizabeth hated Darcy ... Watch the clip


Very Austenesque indeed! Lots of Austen in this movie. One of my unforgettables!
Posted by Maria Grazia at 21:22

I love this movie too! It most definitely has many links to Pride and Prejudice!

I love this movie too. I remember vividly the first time I watched and how it made me feel, which was very Austenesque.

I love the movie. As you said it tells about love to books and it's settled in NY pre-11S, and everything is so lovely and full of love and there are winks to Jane Austen and the Godfather :D...but I guess, you know it's a remake of The Shop Around the Corner, which is more beautiful to me. In any case, a lovely, really lovely film, which I always enjoy to watch.
ElizzyB (@salonjaneausten)

As you may have guessed :-P, I'm not a fan of this 1998 movie (it's a little bit too much for my tastes) - in fact I've watched it only once - but I appreciated the fact that the Darcy pictured in Joe's P&P cover is Colin Firth.
This proves the huge popularity of the BBC series - AND its lead actor ;-) - even in the US, only a few years after its release (1996 in the US). Loved Ernst Lubitsch' The Shop around the corner, though :)

I enjoyed this movie too MG, for the very reasons you have stated here. It is heartbreaking to watch her having to close her little bookstore -- a real sign of the times. I enjoyed your clips (but the last one didn't work for me. I got a file not found message).
@Karen-- I haven't seen The Shop around the Corner. It sounds terrific. I did know about the other remake with Judy Garland -- in the Good Old Summertime. My daughter was watching it and pointed it out to me as being the same plot as You've Got Mail. She enjoyed it, I don't remember what I was doing at the time but I wasn't watching TV anyway.
I do love romances!

Thanks for your kind comments ladies and girls! I'm glad to hear you liked this movie too in all its Austenesque charm. Just wanted to tell Phylly that the last link works now, I've fixed it!
And , Karen, I still wonder how we can be friends in RL! Is there anything we share? Remind me! :P

You've Got Mail is one of my favourites too!
I really enjoyed your post and the clips,thank you.