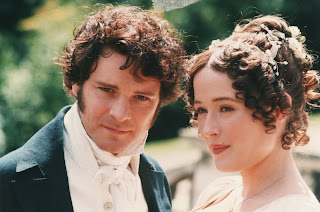 I still wonder what is so special in this simple plot which makes me intrigued and moved ever and ever, each time I re-watch or re-read  Pride and Prejudice: its lovely heroine and amazing hero, its witty dialogues and comic characters, its love stories and its light touch on difficult matters. So many of us seem  to have never enough, and I'm one of them. I'm not a Colin Firth fan of long-standing , nor one who has seen P&P 95  many times till memorizing its remarkable lines, yet I adore re-reading pages from Austen novel from time to time and I've seen the most recent version (2005) many times. I'm always completely taken into this story as  if it was the first time. Does it happen to you, too? 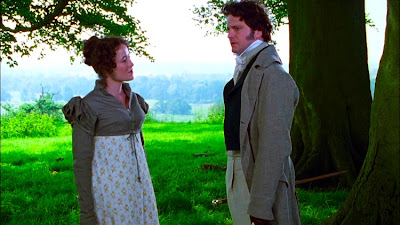 Last weekend it  happened to me again. I saw  the 6 parts of 1995 Andrew Davies's adaptation and I noticed new little details, I  appreciated the amazing talent of the entire cast, the beauty of the locations, the exciting game of looks between Lizzie and Darcy, the difficult play of  the wrong first impressions, the troubled path of love and the final delayed gratification. First impressions and the suffering they provoke until they are revealed as completely wrong, a simple pattern which always has its effect on readers who hope and wish for the final happy ending. 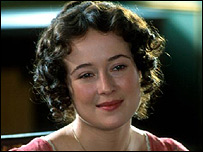 Lizzie's pride and Darcy's prejudice make their first meeting a fight, their acquaintance a repulsion, their approaching each other a clash. But little by little their feelings change, so much as to become longing for one another, esteem, sympathy, reciprocal love. It is always the same, same old story: two twin souls who don't immediately recognize each other and fight at first but definitely surrender to the evidence of love in the end. 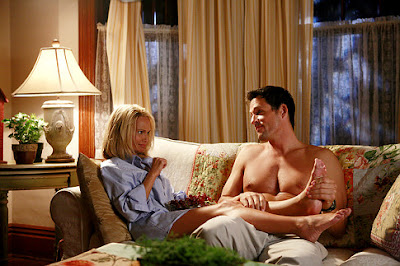 There is much of this Austensian  plot in a TV movie I saw at the weekend as well. It is  set in a modern , glamorous American environment, between metropolitan, frantic New York and picturesque, lyrical Montana but it also has its own Lizzie -  E. J. Baxter, - and its own Darcy -Will Albrecht. And it is similarly based  on the play of first impressions.
When E.J. and Will meet it's ... rivalry at first sight! 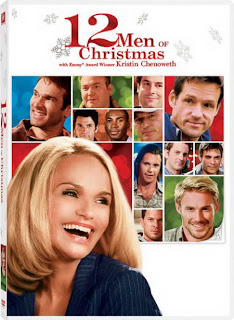 In "12 Men of Christmas" die-hard New Yorker and publicist E.J. Baxter  loses both her high-powered Manhattan job and her lawyer-fiance on the same night at her office Christmas party. E.J. winds up taking a job and moving to the opposite end of the earth - Kalispell, Montana. To help the local search-and-rescue station raise desperately needed funds, a la "Calendar Girls," she tries to convince the male rescue workers to pose for a naked calendar and along the way discovers what really matters to her and wins the heart of her most reluctant pin-up!
The highest point in similarity is in the infamous first proposal scene, when an embarassed, nervous, almost breathless Will makes E.J. a business proposition (he wants to sponsor her calendar) but can't resist revealing his feelings for her in full: she's arrogant, bossy and he can't stand her -  he admits - however,  he's stirred by her and can't stop thinking of her. How could Lizzie /E.J. react if not rejecting such an offensive and improper proposal?
Based on the book "Decent Exposure", recenlty released in the US market as "Dating Mr December"  by Phillipa Ashley. Starring Kristin Chenoweth.
(Read Phillipa Ashley's guest post on My Jane Austen Book Club: Jane Austen, Was it Love at First Sight?)
Posted by Maria Grazia at 22:56

I've never seen 12 Men of Christmas, but I adore your analysis of Andrew Davies' 1995 adaptation of Pride and Prejudice. I am one of those who have seen it over and over again, ever since it was first released (it helps to own a copy), but I too find new details each time I watch. Thanks for the reminder that it would make excellent holiday rematching! I'll keep an eye out for 12 Men as well.

I haven't seen 12 Men of Christmas, but loved the book by Phillipa Ashley. It's one of my favourites.

A hearty "well said!" to all of your thoughts about P&P, and great to know another fan of the 12 Men movie! I get a real kick out of it. ;)