Here is Erin Blakemore's lovely tribute to Jane Austen. Her first published book, " The Heroines's Bookshelf: Life Lessons, from Jane Austen to Laura Ingalls Wilder" , is an exploration of classic heroines and their equally admirable authors,   it shows today’s women how to tap into their inner strengths and live life with intelligence and grace.
Erin learned to drool over Darcy and cry over Little Women in suburban San Diego, California. These days, her inner heroine loves roller derby, running her own business, and hiking in her adopted hometown of Boulder, Colorado.

You’d think that I had a habit of idolizing Jane Austen.  After all, my recent debut book, The Heroine’s Bookshelf: Life Lessons, from Jane Austen to Laura Ingalls Wilder, features her name prominently on its cover, and Jane opens the book.  But there you would be wrong.
My feelings on the construct of Jane were still a bit cloudy in my mind until I heard a toast at a tea I attended this weekend in honor of Jane’s 235th birthday.  The speaker toasted to taking Jane off her pedestal, for frivolous reasons it turned out.  She wanted Jane to be closer to her instead of far away on that marble thing.  That moment was one of enviable clarity.  The book I’d written a year before made sense, not just as one that explores the unique qualities of my favorite literary and real-life heroines, but as one that brings the realities of biography to the bottom of the pedestal. 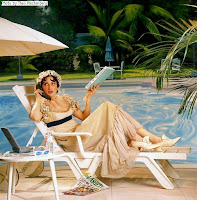 Like her heroines, Jane Austen was nothing if not witty, fascinating, whip-smart, brash, and daring.  But, like her heroines, she was also flawed.  A touchy woman, she often seemed more like Darcy than Lizzie to her modern-day counterparts.  She occupied the sidelines of a world in which the spotlight was key.  Inside that pool of light?  Connections, wealth, pride, marriage, and admiration.  Outside?  Obscurity, poverty, bitterness, and endless gossip.  In response to both life circumstance and internal constraints, Jane chose to go without.
It would be easy to see Jane Austen in black-and-white terms.  After all, she’s been dead so long we have no chance of ever meeting her in person, unless you count the neat row of restrained books that made her name.  Today, I challenge you to see her (and all of your favorite authors and characters) in shades of gray.  Have courage to look at the Jane whose tongue was often witheringly sharp, who succumbed to depression and frustration at a poor sister’s lot.  Dare to hack a bit at the pedestal.  Armed with a bit of biography and a huge grain of salt, you just might find the real woman (now at convenient eye level) to be an everyday heroine, and not a misty dead one.
Erin Blakemore
Visit Erin Blakemore's site
Read Erin's guest post on Fly High -
A CERTAIN LACK OF ROMANCE  (AND A VALUABLE WRITING LESSON)
Posted by Maria Grazia at 23:20

I guess I don't hold too many in high esteem, Austen included. I've been too disappointed over the years. I have always figured the woman who gave us the sparkling Lizzie also gave us Mary Musgrove and Aunt Norris. I think she was quite familiar with them all.

Great perspective, Erin. I agree that I like Austen better when I remember that she got frustrated with her mother, irritated with her neighbors, and hoarded the letters that praised her work. I admire her more when I don't stick her on that pedestal...reminds me of the scene in Philadelphia Story when Macaulay Connor (Jimmy Stewart) tells Tracy Lord (Katherine Hepburn) that Tracy Lord that she's not a goddess, not made of bronze but No, you're "made of flesh and blood. That's the blank, unholy surprise of it. You're the golden girl, Tracy. Full of life and warmth and delight." For me the magic of Austen is that she is full of life and warmth and delight.

Thank you, Erin. I like this idea of Jane as an everyday heroine, one like so many other women who achieved extraordinary goals living lives which were hard or uneventful. This makes her even more dear to me.