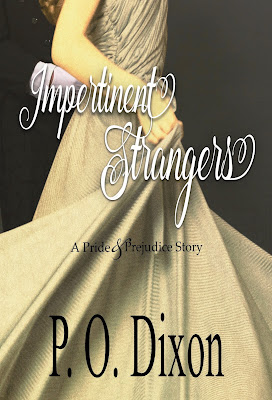 I am happy for the chance to visit My Jane Austen Book Club once again to share an excerpt from my newest release, Impertinent Strangers. It’s always a great pleasure to be here. Thank you so much, Maria Grazia!


An impertinent stranger is thrown into Fitzwilliam Darcy's path and, even though he declares her tolerable but not handsome enough to tempt him, it is all he can do not to think of her. Upon first making Mr. Darcy's acquaintance, Miss Elizabeth Bennet is quite fascinated with him. Then she discovers that the gentleman is haughty and above his company, and she wants nothing to do with him. Still, the prospect of spending time in each other's company is beyond their power to resist. Will Darcy and Elizabeth stop denying the truth to themselves and find in the other what's been missing in their lives?

Read an Excerpt (Reprinted with Author’s Permission. All Rights Reserved)

The first day passed much the same as the second day of her arrival. On the third day, the Collinses received a much-anticipated invitation to dine at Rosings. Taking advantage of the pleasant weather, they walked the half mile or so across the park in companionable silence. That was until the manor house appeared on the horizon, at which point her party members’ enthusiasm was scarcely contained.


With each step that Elizabeth took as she ascended the stairs of the palatial home she thanked heavens that she was her friend Charlotte’s guest and not the other way around. Best described as a sensible woman, at the age of seven and twenty, Charlotte had recently married Elizabeth’s cousin, Mr. William Collins. He was the complete opposite of Lieutenant Wickham. Indeed, a pompous man, he was not only a strain on one’s eyes, but his voice also set Elizabeth’s nerves on edge. More than once since the start of her visit she had congratulated herself on escaping the sentence her friend ardently embraced, by rejecting his hand in marriage. The thought of finding herself married to the toady man who towered over them was enough to turn her stomach.

Her mother had protested fiercely against the injustice of having such a child—one who spurned the hand of the man who would one day inherit every material possession the Bennets of Longbourn now called their own. “He may throw us all into the hedgerows as soon as he pleases once my dear Mr. Bennet passes away,” was her mother’s most ardent complaint.

The second of five daughters, Elizabeth knew she had an obligation to marry, the more favorable the match the better for all her family. But she did not mean to be a martyr. Her strongly held conviction did not lessen the guilt that would make its presence known from time to time, and thus she made an unspoken pact with herself that the next time she would think long and hard before spurning an offer of marriage should one be presented to her again. Charlotte had mentioned that there was to be more than one single gentleman in attendance at that evening’s gathering. May at least one of them be amiable, Elizabeth silently prayed.

Echoing footsteps were the only sounds to be heard as Elizabeth and her party passed through the ostensibly adorned halls on their way to the parlor. Every step gave Elizabeth an uneasy impression of whatever else she might expect once they arrived at their destination. Having heard such high praise of Lady Catherine de Bourgh—the grand lady of all the richness that now stretched before her—from her sycophant cousin over the past few days since her arrival at the parsonage, she did not know whether to be awe stricken or amused, reverent or repulsed. Elizabeth hoped she would be pleasantly surprised.
Otherwise, it is going to be a long evening.


When at last they were ushered into the room where the grand lady of the house and two others were sitting, the servant quickly escaped when the former rose to receive them. Charlotte graciously presented her friend Elizabeth to Lady Catherine, who in turn introduced Elizabeth to her daughter, Miss Anne de Bourgh, and Miss de Bourgh’s companion, Mrs. Jenkinson.
a Rafflecopter giveaway

What a place to stop. So Elizabeth doesn't intend to marry only for the deepest love

Interestingly enough, Darcy poses a similar question to Elizabeth early in the story. Thanks for commenting, Vesper.

Thanks for your kind words, Linda. I'm glad you enjoyed the excerpt.

Pam, I am very much looking forward to reading this book. I think this is an excellent phrase: she thanked heavens that she was her friend Charlotte’s guest and not the other way around. Very well put!

Thanks so much, Ginna! I hope you'll love the story.

Thanks, Kim! I'm glad you enjoyed the excerpt.

It's my pleasure, Linda! Thanks!

This being the third blog I have read along with the excerpt you may take it that I am in earnest about hoping to win a copy. You have convinced me that this is a book well worth reading. Of course, Darcy is the next to be introduced....

I'm really happy to know you're looking forward to reading Impertinent Strangers, Sheila. Thanks for taking part in all of the giveaways.

I've been enjoying the excerpts from this book. It sounds fantastic!

A great excerpt! Would love to read this one! Thanks for a chance to win a copy. :-)

I can't imagine being married to a toady man either.

It's my pleasure, Priscilla. I am delighted to know how much you enjoyed the excerpt. Thank you.

Thanks so much, Anna. It's been lovely connecting with you this week. I really hope you'll enjoy the story.

It's my pleasure, Pam. I am delighted to know you're looking forward to reading the story. I hope you'll love it.

Great point, Jo's Daughter. I do enjoy the comic relief inspired by Mr. Collins, however.

Have read all of the excerpts. The book sounds intriguing! Thanks for the chance to win a copy!

It's my pleasure, Mary. I'm delighted to know you're intrigued. I hope you'll love the story.

I'm glad you enjoyed the excerpt, Kai. Thanks for stopping by and taking part in the giveaway contest. I hope you'll love the story.

Thanks, Becky. I'm really glad you enjoyed it.

Your stories are always enjoyable, Pam, and well-worth re-reads.

This one is on my wish list!! Hope to get it soon!

Thanks, Caryl. I hope you'll love the story just as much.

Thanks so much for your kind words, Betty. Heartfelt gratitude for being among the first to read my stories and helping to make them more pleasurable.

I'm delighted to know Impertinent Strangers is on your wish list, Leah. I hope you'll love the story.