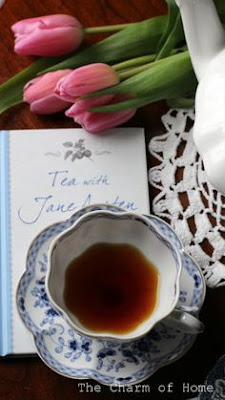 Recently I was honored with a visit from the shade of Miss Jane Austen, whose work I have shamelessly used to inform my upcoming contemporary traditional mystery, Arsenic with Austen. Here is a partial transcript of our conversation (which I recorded on my computer, to her great astonishment and delight).

Mrs. Hyde: My dear Miss Austen, I cannot express how honored I am that you have chosen to grace us with your presence.

Miss Austen: My dear Mrs. Hyde, I assure you the pleasure is all mine.

Mrs. H: So kind of you to say so. I must confess, I was a trifle concerned lest you be offended by the way I have used your work in my humble little novel.

Miss A: I assure you, madam, I have rarely found myself in such company as I encountered among your characters.

Mrs. H (blushing): I must apologize, Miss Austen, for placing you amongst such low villains as some of my characters turned out to be. But as I’m sure you understand, contemporary American society does not enjoy the distinctions so carefully preserved in the England of your day. Those of more refined sensibilities must perforce mingle daily with all manner of louts, boors, and cads.

Miss A (bowing): Indeed, I do understand. I have watched the developments of the last one and half centuries with great concern. As society devolves to the lowest common denominator, it is gratifying and comforting to observe that my humble novels are still read by those who are nostalgic for a more gracious era.

Mrs. H: My dear Miss Austen, you give yourself too little credit. Your “humble novels,” as you call them, have reached a level of popularity you could scarcely have conceived of in your lifetime. They have not only been read widely but have been made into numerous films, and have provided the basis for a vast and growing multitude of works of fiction based on your characters, your own life, and your time period in general.

Miss A: I must say, it has been a source of vast amusement to see the outrageous conclusions some people have come to about my private life—which, I assure you, was in fact quite dull. My characters led much more interesting lives than I did.

Mrs. H: I suspected as much, which is one of the reasons I chose to give your work a more peripheral role in my own novel, and to leave your private life entirely alone. I felt, as well, that it would be too presumptuous of me to write within the worlds you created so beautifully. I hope this does not disappoint you.

Miss A: On the contrary, it delights me. I feel you have grasped something of the essence of my novels which is sometimes lost amidst the current fascination with their “romantic” aspects—a use of the word which, I confess, somewhat puzzles me. In my day, a “romance” was an exaggerated, unrealistic story intended to terrify the reader and awaken her darkest passions—a tendency which I avoided in my writing and in fact parodied in Northanger Abbey.

Mrs. H: To great comic effect, I must say. Indeed, the evolution of the word romance would make a fascinating study, but one which, perhaps, would exceed the limits of our current conversation.

Miss A: As you say. But as a writer I was, above all else, an observer of human nature, and I strove to report it in all its comedy and tragedy. By using my work as the framework for a murder mystery, you have simply brought the tragedy more to the forefront.

Mrs. H: It relieves my mind greatly to hear you say so. But I hope you find some humor in Arsenic with Austen as well? Not that my poor wit could ever match your own.

Miss A: With time and study, my dear Mrs. Hyde, I feel assured your wit will develop most satisfactorily. And I must say, if we treat of “comedy” in the classic sense of a story with a happy ending, I was touched by your depiction of the courtship between your main characters as a parallel to that of my Anne Elliot and Captain Wentworth. The reawakening of a thwarted love is a subject that lies close to my heart.

Mrs. H: You are too kind. I hope it did not distress you that my characters are so much older?

Miss A: Indeed not. It was a regrettable tendency of my own era to regard any tenderness between persons of middle or advanced age as a subject of raillery and derision. But I, being now in a sense well over two centuries old, am quite aware that love can bloom at any age. I must confess, I found your Lieutenant Luke Richardson quite appealing, despite his somewhat rough exterior.

Mrs. H: Captain Wentworth has always been my favorite of your heroes, and I think Luke owes a little something to him.

Miss A: As Emily is in many ways not unlike Anne. And Brock bears some resemblance to Mr. Elliot, though, if I may say so, with a rather less plausible exterior.

Mrs. H: I’m afraid you’re right. Though I wonder if Mr. Elliot would be able to maintain his plausible exterior into middle age. Don't you think at some point it might begin to crumble?

Miss A: That is an interesting point, Mrs. Hyde. I believe you may be right.

Mrs. H (concerned): My dear Miss Austen, I perceive you are beginning to fade around the edges. I’m afraid all this talk has exhausted you.

Miss A: Indeed, I do feel my time for materialization is coming to an end. We are allotted only so much, you know.

Mrs. H: Thank you again, most cordially, for bestowing some of that precious time on me. I am most honored.

Miss A (fading): The pleasure was all mine.

KATHERINE BOLGER HYDE has lived her life surrounded by books, from teaching herself to read at age four to majoring in Russian literature to making her career as an editor. She lives in California with her husband. Arsenic with Austen is her first novel. 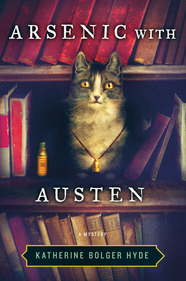 When Emily Cavanaugh inherits a fortune from her great aunt, she expects her life to change. She doesn't expect to embark on a murder investigation, confront the man who broke her heart 35 years before, and nearly lose her own life.

Emily travels to the sleepy coastal village of Stony Beach, Oregon, to claim her inheritance, centered in a beautiful Victorian estate called Windy Corner but also including a substantial portion of the real estate of the whole town. As she gets to know the town's eccentric inhabitants--including her own once-and-possibly-future love, Sheriff Luke Richards--she learns of a covert plan to develop Stony Beach into a major resort. She also hears hints that her aunt may have been murdered. Soon another suspicious death confirms this, and before long Emily herself experiences a near-fatal accident.

Meanwhile, Emily reads Persuasion, hoping to find belated happiness with her first love as Anne Elliot did with Captain Wentworth. She notices a similarity between her not-quite-cousin Brock Runcible, heir to a smaller portion of her aunt's property, and Mr. Elliot in Persuasion, and her suspicions of Brock crystallize. But as she and Luke continue to investigate and events speed toward a climax, Emily realizes that underneath the innocent-looking rocks of Stony Beach lurk festering jealousies that would have shocked even the worst of Jane Austen's charming reprobates.

a Rafflecopter giveaway
Posted by Maria Grazia at 17:07

I loved this! And the book sounds absolutely fantastic!

Arsenic! Not that sounds like an exciting book to read! I love the cover, btw!

I rarely see Persuasion being featured in an Austen spin-off, so that really caught my attention.
Dianna