SPOTLIGHT ON ... CHAOS COMES TO LONGBOURN, A PRIDE AND PREJUDICE VARIATION BY VICTORIA KINCAID + GIVEAWAY 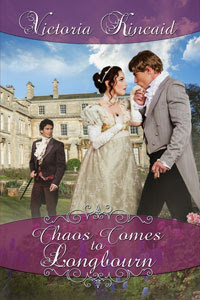 While attempting to suppress his own desire to dance with Elizabeth Bennet, Mr. Darcy flees the Netherfield ballroom only to stumble upon a half-dressed Lydia Bennet in the library.  After being discovered with her in a compromising position, Darcy is forced to make her an offer of marriage.
Fearing the Bennets will attempt a similar “trick” with their brother, Mr. Bingley’s sisters convince him to leave Hertfordshire without any intention of returning.  After Elizabeth refuses Mr. Collins, a heartbroken Jane Bennet accepts his proposal.
Having resolved to propose to Jane, Bingley returns to Longbourn; but when he learns of her betrothal, he makes an offer to Elizabeth instead.  She accepts, with the hope that Jane will change her mind if Bingley remains at Netherfield.
Meanwhile, Sir William Lucas is aware that Wickham had actually compromised Lydia in the Netherfield library and blackmails him into proposing to Charlotte Lucas, who is in danger of becoming an old maid.
Hertfordshire has become a tangled web of misbegotten betrothals.
Although Darcy yearns for Elizabeth, he feels honor bound by his promise.  Elizabeth is also developing feelings for the master of Pemberley, but he has never seemed so far out of her reach.  How can Darcy and Elizabeth unravel this tangle and reach their happily ever after?

Darcy tripped spectacularly, falling full length on top of the half-dressed girl.
The girl squealed.  “Ow!  You oaf!  Get off!  Move your hands!”  Darcy hastened to comply, quickly removing his hands from anything that might resemble a female body part.  “Get your hands off me!” the girl shrieked completely unnecessarily.
Darcy scrambled backward, attempting to find purchase and regain his feet.
Then he froze at the most horrible sound in the world: the opening of the library door.  A female form entered the library from the hallway, silhouetted by candlelight from behind.  “Lydia?” a voice called.  Darcy had no trouble identifying its owner.  Of all the women at the ball, it had to be Elizabeth Bennet.
“Here, Lizzy!” the half-dressed girl called to her sister.
Oh, no, no, no!  Why did she say anything at all?  Why could they not pretend the library was uninhabited?

Win a copy,  ebook or paperback at the winner's choice.

This giveaway contest is open internationally.

a Rafflecopter giveaway
Posted by Maria Grazia at 13:56

Oh, my! What an except! What, well to quote the title, Chaos, and it continues from there.....So looking forward to reading this book and chuckling. Can't wait to see how the situation rights itself. Thank you for the generous give away.

Poor Darcy. That must have been the hardest thing for him to have ever said!

Let the chaos begin! Poor Darcy! Of all the people to trip on while she is half dressed. What a mess! I look forward to reading how these disasters of relationship turn to HEA. Thank you for the giveaway.

oh, what a predicament!

This looks to be a very entertaining read...lol

I am liking the summary and posts I have seen about this!

I expect Darcy is regreting those words of Elizabeth being tolerable, as if she liked and knew him she might have helped him in this situation

Oh dear, Darcy could not have guessed what trouble awaited him. This story sounds like a fun read!

Poor Darcy. I do feel for his situation. I look forward to seeing how this story gets turned around.

Oh my oh my! What have you done to poor Mr Darcy? Can't wait to discover how this mess untangles itself. I'm sure it will be a very chaotic read!

What a fab extract! Can just imagine how Darcy,in attempting to help Lydia,could be found in such a compromising position.
Trying to do the honourable thing and having to pay such a high price!!!

Love the excerpt! Darcy of all people caught in a compromising position with Lydia is just too much for his poor nerves!

I'm so happy everyone enjoyed the excerpt. Good luck with the giveaway!

This sounds so amusing. I would love to win a copy but even if I am not that lucky I will be reading this.

OMG: Linda, first of all whether not you win you just MUST treat yourself by reading this classic. Indeed, one of the best loved classics for over 200 years. Then I just read Chaos Comes to Longbourn today and it was a 5 star read for me. I loved it...so very funny.

Charlotte suggesting that Mr. Collins give Wickham marriage bed advice - I Howled! If you haven't read P&P you can't appreciate how droll that comment is.

love this idea. It seems so interesting. Darcy and Lydia. Lizzy and Bingley.What a mess.

Lydia must not be able to grasp the immense honor to be Darcy's wife. Lucky lucky girl ;-)

OMG! that excerpt is awesome, I think this will be a funny and interesting read! :D