SPOTLIGHT ON ... & GIVEAWAY! MRS BENNET'S ADVICE TO YOUNG LADIES: A MOTHER VIEW OF PRIDE AND PREJUDICE 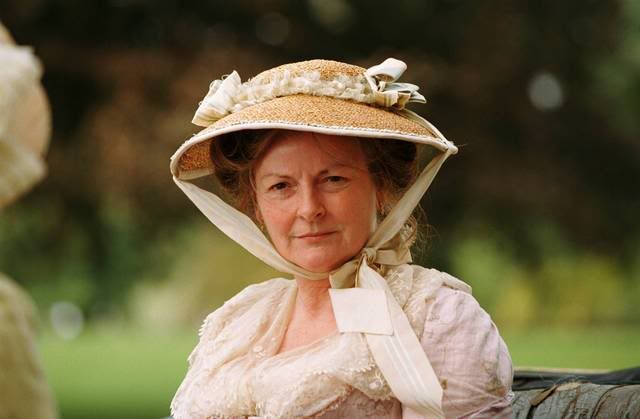 We have a new Austenesque read under the spotlight this weekend.  The book is Mrs. Bennet’s Advice to Young Ladies: A Mother’s View of Pride & Prejudice by Victoria Grossack, a dear friend of My Jane Austen Book Club. Her latest book gives us Mrs. Bennet’s views of the events of Jane Austen’s most popular novel, Pride and Prejudice. Scroll down, enjoy reading the excerpt Victoria has granted us and get your options to win an ebook copy. Good luck and happy weekend! 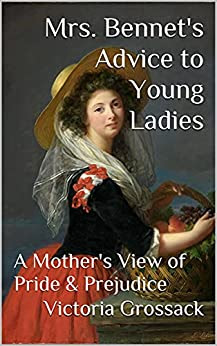 Mrs. Bennet of Jane Austen's Pride & Prejudice always has plenty to say. In MRS. BENNET'S ADVICE TO YOUNG LADIES, she tells her side of the story, lets us know how she married Mr. Bennet, and has words of wisdom for anyone who will listen."Grossack's writing is spot on when it comes to capturing Jane Austen's tone and writing style." COZY MYSTERY BOOK REVIEWS 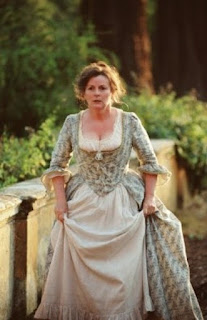 I was reclined on the sofa, my computer on my lap, when Mrs. Bennet came to me again. Over the years, Mrs. Bennet has come to me often, telling me she wanted me to write a book with her. I had used various excuses to put her off, but she is a most insistent character, and she finally happened upon me at a moment when my health was good and I had some time.

“I am glad to hear it,” she said, and then, without waiting for my response, continued. “You will do the writing,” she said, “but I will give you the ideas.”

“What ideas?” I asked, for when she had called on me before, I had been at a loss as to what she wanted.

“I want someone to tell my story. Miss Jane Austen wrote too much about my daughters, and not enough about me.”

I told her I was not prepared to criticize Jane Austen, whose works I highly esteemed.

“Yes, she was very talented, and we are all grateful to her. I do not speak ill of her. Still, Miss Jane Austen did not give me enough credit. Nothing would have happened in Pride & Prejudice if it were not for me!”

As the mother of the young ladies who starred in the novel, I supposed her argument was reasonable.

“You misunderstand me,” said Mrs. Bennet. “Of course, being the mother of five daughters, bearing them and raising them, is no small matter! We all owe our mothers a great deal; we owe them our very lives. However, I speak of the particular events of Pride & Prejudice. The story is really mine. What does Miss Jane Austen write at the end of her very first chapter?”

I opened a copy of Pride & Prejudice, and in the first chapter I read, in a passage about Mrs. Bennet:

The business of her life was to get her daughters married; its solace was visiting and news.

Mrs. Bennet was triumphant. “It was not the business of my daughters to get themselves married, although I did all I could to impress the importance of that on them. No, it was my business to get them married. And I succeeded!” 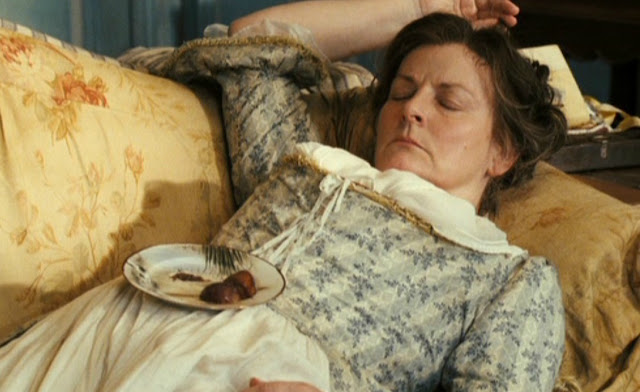 I nodded, then raised a finger, for I had another objection to her project. She wanted to dispense advice not just to ladies, but to young ladies. “Why do you wish to exclude those who are older?”

“How old are you?” asked Mrs. Bennet.

Demurring, I declined to answer precisely, but confessed I was older than most of the characters in the pages of Pride & Prejudice.

I agreed her perspective was probably different from mine.

“I know you have ambitions you have not achieved,” continued Mrs. Bennet. “I know you are not completely satisfied. You could be happier than you are.”

“My life is very good,” I countered. “I cannot complain.”

“That is your problem! You don’t complain. If you won’t complain, how can you expect things to improve?”

We were both silent a moment, but silence was not a condition Mrs. Bennet could tolerate long. “Now, my dear Young Lady, I also want you to tell my story.”

“My story,” she repeated. “My youth in Meryton with my sister and my brother; Colonel Miller’s regiment; my engagement and marriage with Mr. Bennet.”

I was curious about Mr. and Mrs. Bennet; they seemed such an unlikely pair.

“And the events in Miss Jane Austen’s text – but from my point of view.”

Victoria Grossack is also the author of several mysteries set in the Jane Austen universes: The Meryton Murders; The Highbury Murders; and The Mansfield Park Murders.

a Rafflecopter giveaway
Posted by Maria Grazia at 13:06

How interesting. I took part in a challenge a couple of years ago where we re-read all the Austen books with the view of "motherhood" (see Pride & Prejudice here. It was great. I probably should try to get this book.

Thanks for this info.

I wonder how she is going to explain her emotional abuse of Mary. I am so glad when there are stories pairing off Mary with the Colonel.

interesting perspective for the book.

This will be a very interesting point of view.

The first time I saw this book, I couldn't help but think this will be intriguing. I thought this is a great chance for her to explain herself...Looking forward to reading her story ( I enjoyed this post. thank you)

This is such a fun idea for a book!